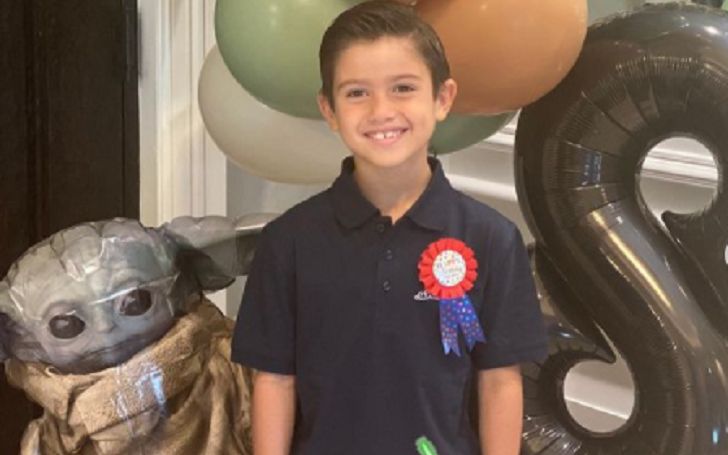 Dominic Lopez is a popular star kid who grabbed attention even before his date of birth because of his father’s immense success in the entertainment world. He is the son of Mario Lopez, an actor, and TV host. His father is better known for his role as A.C. Slater on Saved by the Bell and Saved by the Bell: The College. In the meantime, his mother Courtney Mazza is also a Broadway actress and dancer.

As for Dominic’s parents’ marriage, the power couple has been blissfully married for years. Besides, let’s also know does Dominic have any siblings?

Here are some unknown facts regarding Mario Lopez’s son including his extravagant lifestyle and more. Let’s take a look!

How old is Dominic Lopez? He Was Born Via C-Section

Born in Los Angeles, California, Dominic is aged 8 as of 2021. He celebrates his birthday on 9th September, two days before his older sister Gia‘s. Mario was the first to announce the big news. He wrote on Twitter,

The baby boy who was delivered via c-section weighed in at 7 lbs., 2 oz at the time of his birth. And Domonic was named after his mom Courtney’s grandfather. He has also nicknamed Nico.

About an hour after Mario announced the news, the actor also expressed his joyfulness for being the father again on Twitter,

“I am in heaven right now…. And in a bar. #CelebratingDominicLopez #BabyLopezNumber2.”

Pregnancy Announcement: The Gender of the Baby Remains Surprised

Besides, Mario and his wife Courtney announced they were expecting their second child in February of the year but they kept their baby’s gender surprised to everyone. They first broke the news to Extra. And later in an interview with Us Weekly, Mazza explained,

While talking about being a father for the second time, Saved the Bell actor gushed,

Since Lopez and his spouse Mazza announced their pregnancy, the enduring couple began spending more time with their daughter Gia who was initially quite curious to know if the baby is a boy or a girl. The soon-to-be dad said,

“She’s pointing at the baby and saying, ‘There’s a baby in there.”

He added they decided to keep the gender of the baby secret,

“She wants to know if it’s a boy or a girl, but we don’t know because we’re waiting to find out. That’s kind of tough sometimes — we just don’t know!”

Back in September 2015, the Extra host and his spouse Mazza threw their son Dominic and Gia an epic Finding Dory-themed birthday party. The siblings wore custom-made shirts with their name and age at their outdoor birthday party which was attended by about 120 people.

Furthermore, on the occasion of Dominic’s 8th birthday, his proud mom shared a series of photos with the caption,

“My baby is 8! I can’t believe it… I love you more than you know Dominic!”

Studies at the Catholic School

Back in September 2021, Dominic’s papa Mario posted a sweet photo of his son with his school dress. He revealed in the caption that his son now studies at 2nd grade in Catholic School.

Dominic Lopez’s Parents Married Life: How Long Have They Been Together?

His mother and father have been married for nearly a decade. Mario and Courtney exchanged their vows on 1st December 2012, at the seaside estate of Girls Gone Wild creator Joe Francis in Punta Mita, Mexico. They wed in front of over 200 guests including Eva Longoria. And their wedding also premiered on TLC’s two-hour episode titled Mario & Courtney’s Wedding Fiesta.

Furthermore, Dominic’s then 2-year-old sister Gia appeared as a flower girl at their nuptials.

As for their first meeting, they first came across when both of them were on the Broadway production of A Chorus Line in the fall of 2008. The duo engaged during their New Year’s vacation to Ixtapa, Mexico in early 2012. Mario popped the question with an $80,000 five-carat ring.

Where Does Dominic Lopez Live? His Father’s Net Worth

He lives in his parents’ house in Glendale, California. Talking about his father’s net worth, Lopez, 47 has an estimated net worth of $25 million as of 2021. And his annual salary is $6 million.

Besides, being the son of such a wealthiest father, Dominic is likewise obviously living a lavish lifestyle.

His mother is a Broadway Actress

Dominic’s mother Courtney has forged a highly successful career as a Broadway actress. Started performing on local Broadway shows from an early age, Mazza subsequently developed a strong passion for music and dancing too.

Her initial Broadway performance includes Pittsburgh Civic Light Opera, A Chorus Line, The Little Mermaid, and more.  Besides, the actress who graduated from the University of the Arts in Philadelphia also popped up in several TV shows like Wendy: The Wendy Williams Show, Celebrity Family Feud, and Ellen: The Ellen DeGeneres Show.

Father is an also an Actor

Unlike Dominic’s mother, his father has a fantastic career in the TV and film industry. He made his acting debut playing the role of Tomas Del Gato in a.k.a Pablo in 1984. His early fame came when the actor portrayed the main role of A.C. Slater in Saved by the Bell, followed by Saved by the Bell: The College Years.

In addition, Dominic’s dad Mario is also a TV and radio host. He has worked as a host of America’s Best Dance Crew, the second season of The X Factor, and more.