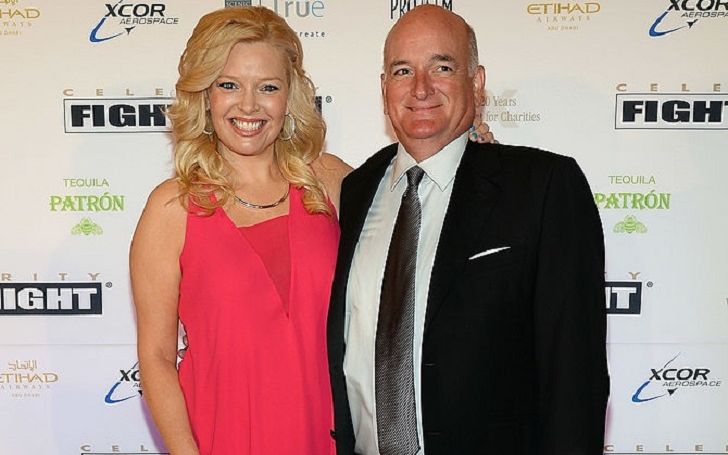 Not all couples’ are able to properly manage their professional and personal life. But Melissa Peterman and her husband John Brady are among those few couples who have mastered the art and maintain quite a balance in their life.

The couple has been married for over two decades and is still going strong. Melissa gained initial popularity for her performance on Tony’s n’ Tina’s Wedding while her hubby also has a great career as an actor.

In the article, we will include some hidden facts of their long-time marriage. Also find out, how the two first met? Do they have children?

Melissa tied the knot with her husband John on 5th June 1999. They exchanged vows in front of their family members and close friends. Peterman donned a white gown while her husband John wore a black suit on their big day.

It’s been over two decades since the power couple is married and they are still leading a happy matrimonial relationship. The duo is also quite open about their relationship. The pair frequently attends several major events together.

Back on 5th June 2019, Melissa also shared a series of photos with her hubby celebrating their 20th wedding anniversary.

Get used to it. This is the face you get for the rest of your life. #happyanniversary #20years

When did they first meet?

Melissa first came across her future-spouse John while performing in Tony n’ Tina’s Wedding at Hey City Theater in Minneapolis. They dated for some time before their nuptials.

Melissa Peterman and John Brady are the parents of one child

They welcomed their one and only child, a son, David Brady, on 20th October 2005. Their son weighed in at 8 lbs. 5 oz. He was born at Cedars-Sinai Medical Center in Los Angeles.

Soon after Melissa gave birth to her son, a representative for the duo told People,

“Mother and baby are doing well and resting at the hospital.”

Back in October 2014, Melissa appeared with her son at the Disney’s VIP Halloween event at Disney Consumer Products Campus.

Who is Melissa Peterman Husband?

John Brady is also an actor who began his career with a TV series Reba in 2002. He worked on Trading Spaces and World Cup Comedy in 2004. Brady later took a long hiatus from the entertainment industry until making his come back with a documentary, How to Make It in America in 2010.

His other TV credits include Coach, Nurse Jackie, Captive State, and RelationsFixTM. Similary, Melissa also has a great career in the entertainment field who has worked in a number of high-profile movies and TV shows.

Brady’s dad Vallace Brady served in the Navy during World War II. He was also awarded the Navy Cross after luckily coming back home from the frontlines. John’s wife frequently shares tribute photos of her late father-in-law on her social media handles.

Where does Melissa Peterman, her husband, and son live?

Melissa currently lives in her house located in the Silver Lake suburb of Los Angeles with her life partner and son. The 1,700-square-foot home boasts a two-bed and one-and-a-half bath. The property connected by a cool California breeze also has a pool and backyard seating area.

In May 2019, the actress disclosed on Twitter they were revamping their house after 18-year.

After 18yrs we are finally remodeling our home. May the odds ever be in our favor. #wewillnotdivorceoverthis #remodelmotto #exciting pic.twitter.com/p1Ewx9sfJi

Furthermore, they also own a house on Cathedral Hill in St. Paul.