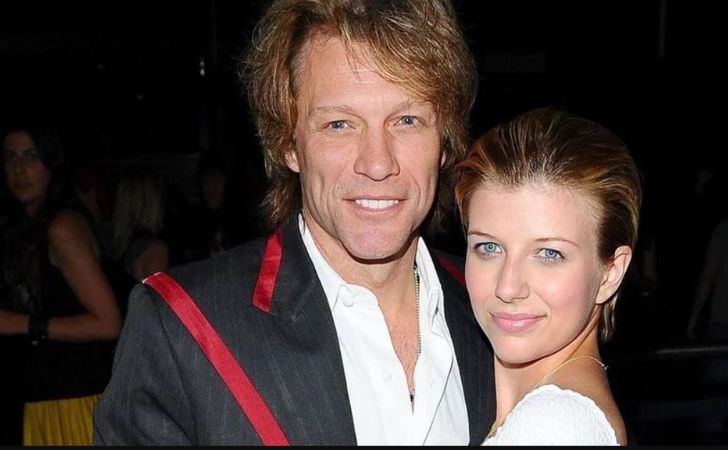 Stephanie Rose Bongiovi is the daughter of American singer, songwriter Jon Bon Jovi. Though she is primarily known as the daughter of a famous father, she is also recognized in the media for some wrong reasons.

She became a huge subject in the media in 2012 after she was found with drugs in her residence. In fact, she has even overdosed on heroine back in the day. It has been years since the incident happened so, how is her life at present?

In this article, we are going to talk about every detail of her career, relationship, and a lot more.

Who is Stephanie Rose Bongiovi?

Stephanie Rose Bongiovi is the eldest daughter of father  John Francis Bongiovi Jr. and mother Dorothea Hurley. While her father is a successful American singer-songwriter, record producer, and actor, her mother is a restaurant owner and karate instructor.

Similarly, she is the granddaughter of John Francis Bongiovi, Sr, former marine and barber, and Carol Sharkey, former ‘Playboy’ “bunny” and florist.

She was born on born on May 31, 1993, in New Jersey, United States. Talking about her education, she is a graduate with a liberal arts degree, from The New School in Manhattan. She reportedly finished her graduation in 2017.

Though Stephanie was born to a famous father, she along with the rest of her siblings were kept away from the media.

She Has Three Siblings

Stephanie Rose Bongiovi is not the only kid in the family. She rather has three younger brothers, Jesse Bongiovi, Jacob Hurley Bongiovi, and Romeo Jon Bongiovi.

While Jesse was born on February 19, 1995, Jacob and Romeo were born on March 29, 2004, and May 7, 2002, respectively. Jesse is a graduate of the University of Notre Dame and finished a Bachelor of Arts degree in Political Science and Government in 2017. Back in 2018, he also founded Hampton Water Wine Company along with his father.

Talking about her other two brothers, they are currently pursuing a university education.

Back in November 2012, Stephanie Rose face a near-death experience after heroin overdoes. She was found unconscious in her college dorm room at Hamilton College, where she was a first-year student. Soon, she was taken into medical supervision where she gained consciousness only after a while.

Her father Jon Bon only came to know about her daughter’s addiction after the incident. Talking to Metro, after the news of Stephanie’s overdose, he stated,

She’s good. She’s getting through it. She’s healthy. The greatest gift that I have is that I have her. We’ll get through this. It was a shock for everybody and hopefully, we learn from these life lessons. It wasn’t what you see in the movies. It’s a pill form that these kids have access to. It was the first and hopefully the last time.

He further said that it was the worst moment for him as a father. Let’s hear in his words,

It was my worst moment as a father. The first thing she said, I’m all right but then she said this is what happened. You wake up, you shake it off and put your shoes on and say OK, I am on the way home.

Later, police recovered more drugs from her room which included heroin and marijuana. Further, one of her college mates Ian S Grant along with her was arrested for the possession of marijuana and usages of paraphernalia.

Stephanie Rose Is Clean & Leading a Decent Career After The Incident

Since the drug overdose, Stephanie has embraced a drug-free life. In fact, soon after the incident in 2012, she worked at The Weinstein Company as an assistant. Similarly, she also was an intern at The Daily Show with Jon Stewart, and at Vice Media.

Later, after finishing her graduation in liberal arts, she started assisting her father at the Rock & Roll Hall of Fame Inductions. Apart from these, she is also a model and has modeled for Nikki Lund’s ‘White Trash Beautiful’ fashion show in London.

Besides, lately, she is often seen with her famous father in the media.

Her Father Wrote A Special Song For Her

No doubt every father loves their daughter and the case is the same with Stephanie and her dad Jon Bon Jovi. In fact, her father is so much in love that he even wrote a song for her.

The singer, who has sold millions of albums, has even dedicated a few songs for his daughter. He wrote the song named I Got the Girl which was included in his 2000 album, Crush. In the song, he clearly expressed his love for his only daughter.

As unusual as it may sound, he even performed the song with Stephanie years later on stage at ‘This house is Not for Sale’ tour in Las Vegas.

Is Stephanie Dating a Boyfriend?

It is quite unlikely for celebrity kids to be single, but it looks like Stephanie is not dating any boyfriend. So far, there are no reports of her dating anyone. Also, she has not been spotted with anyone who could be claimed to be her romantic interest.

That said, it is highly possible that she is simply keeping her love life a secret. But since she has not openly addressed her relationship, it is safe to say she is single and not in a romantic relationship. Further, unlike all the popular rumors, Stephanie is neither engaged nor married at present.

However, we hope, she talks about her relationship status in public soon.

Not many know but Stephanie’s parent’s wedding was a secret ceremony. The couple tied the knot secretly during their trip to Las Vegas in 1989. Their beautiful intimate ceremony was held at the Graceland Wedding Chapel.

Well, it has been over 30 years since their marriage and the couple is doing pretty well in their relationship. So far, there have been no reports of conflicts in their marriage.

Talking about John Bongiovi Jr and Dorothea Hurley’s meeting, they first met when they were in their high school at the Sayreville War Memorial High School in New Jersey. Soon after their first encounter, the couple began dating.

Not many know, but Stephanie’s mother Dorothea Harley was a junior karate champion. As per the reports, she even went to her hometown to become a karate instructor after starting a family with her husband Jon.

Apart from being a karate instructor, she also co-runs the JBJ Soul Kitchen Restaurant chain.