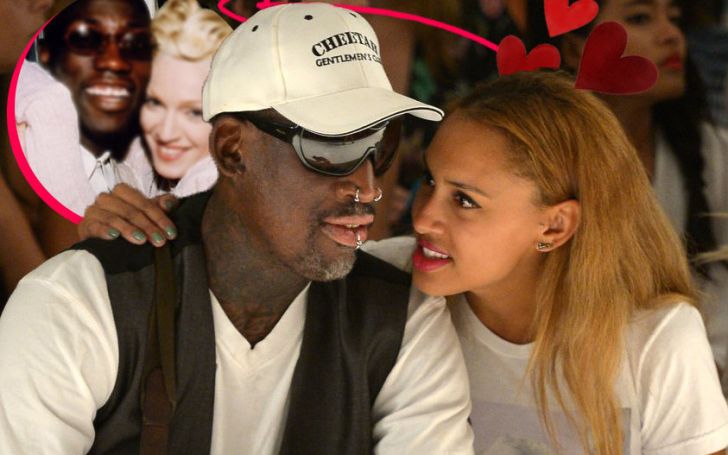 Alexis Rodman is an American star kid. She is the oldest daughter of NBA legend, Dennis Rodman. The retired basketball player shares Alexis with his first wife, Annie Bakes.

Growing up, Alexis didn’t have a father figure in her life as her dad wasn’t around much. However, things later turned out better for the father-daughter duo. For the past several years, they are on excellent terms with each other.

Meanwhile, Alexis is enjoying a decent life far from the media. This is why people are curious to know what she is doing nowadays. Let’s find out today everything about her. Also, know who her husband is, and if she has any children with him.

Rodman was born Alexis Caitlyn Rodman in September 1988, in California. And her age is 33 as of 2022. She is the only child between Dennis Rodman and his ex-wife, Annie, a former model from Los Angeles.

Alexis belongs to the mixed ethnicity of African-American and Caucasian. She has American nationality.

Her parents were in a relationship for around six years before calling it quits. They started dating around the mid-1980s and started living together in the year 1987. A few years later, they welcomed their daughter Alexis, but when she was only a couple of months old, the pair decided to separate only to get back together after a few months.

Dennis and Annie eventually decided to marry and reportedly exchanged vows on their daughter’s fourth birthday on September 28th, 1992. However, their marriage didn’t hold out for too long and they called it quits after a few years into their marriage. They officially divorced in 1993.

Ever since her mom and dad separated, Alexis had an estranged upbringing. Not having a father figure around whilst growing up certainly takes its toll and similar was the case for Alexis.

Fortunately, everything became fine later on and now Alexis is living a content life.

Back in 1997, in an interview with the Chicago Tribune, Alexis’s mom, Annie told that Alexis is somehow following in her dad’s footsteps but in a bad way. Apparently, she had beaten a girl from a basketball while they were playing. When asked why she did that, Alexis said, ‘Well, Daddy does it.’

The worst part of all this was that Alexis blamed her mother for letting her daddy go away. Annie said, “Alexis shows a lot of anger right now and she is holding it against me that I left Dennis.” She further added, “Alexis also keeps saying to kids at school: “My daddy has girlfriends,’ and, `My daddy doesn’t come to see me.”

Because of her anger issues, she also took anger management classes. Thankfully, the childhood trauma didn’t carry on till her adolescent age and she became a well-grounded person.

During these terrible times, Alexis’ dad Rodman never visited her. It was her mother who solely took care of her because of which Alexis attributes all the happiness she has to her mother.

How many siblings does Alexis have?

She doesn’t have any biological siblings but two half-siblings, Dennis Rodman Jr. and Trinity Rodman, both from Dennis’s marriage to Michelle Moyer. Rodman and Moyer were married from 2003 to 2012.

It looks like Alexis doesn’t have a close relationship with her half-brother and sister. Both Dennis Jr. and Trinity are active on social media yet they have not shared any picture with their older half-sis. This implies they aren’t very close to each other.

Now talking about Dennis Jr. and Trinity’s profession, well they are into sports just like their dad. While Dennis is on the verge to become a Basketball player, Trinity is into soccer. Both of them are taking big strides in their respective career. We’re sure Dennis is proud of his offspring.

What is Alexis Rodman doing nowadays?

Well, unlike her half-siblings who are making headlines day in and day out with their sports prowess, Alexis loves to stay low-key. So far, she has appeared in the public only a handful of times with her dad.

The only time we spotted her in the public was back in 2014 when she attended the Mercedes Benz Fashion Week with her father. At the event, the father-daughter had a couple of happy moments.

Going by the photographs, it seems all the animosity Alexis might have had regarding her dad has long since disappeared. Besides, there isn’t any information on what Alexis is doing these days. To say the least, she lives a happy life with her husband and their son. Let’s talk about her personal life in the next section!

Alexis Rodman is married: Who is her husband and do they share any children?

As of now, Alexis enjoys a blissful marital life with her boyfriend turned husband Robert Bunfill. They exchanged vows in an intimate ceremony held at Citrus Heights, California on August 30, 2014.

The wedding was kept behind closed doors until Rodman himself announced the news of her marriage, indirectly. Back in June 2017, the former Chicago Bulls player took to his Twitter account and announced the news that he’d just become a grandfather for the first time. Yes, Alexis is the mother of one child.

Alexis and her husband Robert welcomed their son Vincent in June of 2017. As her husband is of the white race, their son is now one-quarter African-American and the rest Caucasian.

As for the question since when the pair is dating, well, there isn’t any information available. Judging by their bond, they might’ve dated for a few years before jumping into marriage. Whatever the case may be, we wish the pair all the best and hope they don’t have any sort of problem in their married life.