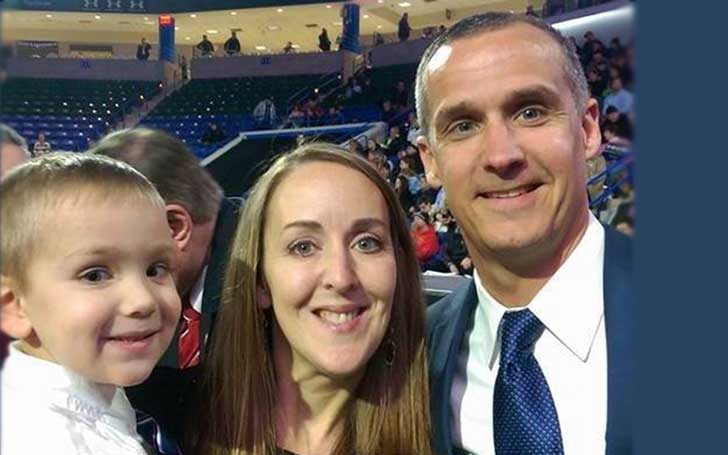 Moreover, his popularity peaked during his work as a manager for Donald Trump’s presidential campaign. Although his political career is well-highlighted, pretty few things about his personal life are revealed in the media.

Well, the 47-year-old political commentator is married to Alison Lewandowski for over a decade. But there aren’t many details surrounding his wife Alison. So, in today’s episode, we are talking about Alison Lewandowski’s lifestyle, her relationships, and her early life. Read it through.

Alison Lewandowski is a Former Teacher

Well, Alison Lewandowski was born in 1974 in Massachusetts, the United States of America. She is 48 years old as of 2022. Lewandowski holds an American nationality while there are no details on her ethnic background and race. Besides, the details surrounding her early life, parents, and siblings are not available.

Alison married Brian Kinney in 1998. There are very few details about her relationship and marriage to Kinney. The couple spent three beautiful years as a husband-and-wife before her husband Kinney died in the tragic 9/11 attack.

As to Washington Post, on September 11, 2001, Kinney boarded the United Airlines Flight 175 at Boston’s Logan International Airport to California to meet a client. However, hijackers steered the flight into the South Tower of the World Trade Center and Brian died on the spot.

After the incident, Alison remained single for the next couple of years.

She Is Married to Corey Lewandowski since 2005

Alison Lewandowski and her second husband Corey Lewandowski are married since 2005. Alison met her future husband, Corey Lewandowski when she was in eighth grade and Corey was in ninth grade. The outlet further reported that the couple dated in high school and college before parting their ways initially.

The ex-couple reunited a few years after Alison lost her first husband. And in 2005, the lovebirds tied the knot in a privately organized marriage. Besides, Alison Lewandowski gave birth to four children, three sons, and one daughter, with her second husband Corey. Their children’s ages range from 9 years to 14 years.

The Lewandowski-duo are together for more than one and a half-decade and both of them have played a significant role in each other’s life.

Corey talked about his wife’s support in his life during a conversation as:

“When you have a great support system at home, it makes your job a lot easier. While I know it’s difficult on her and the kids, they understand what we’re trying to accomplish here is very, very important for future generations.”

As of now, the husband and wife and their four children live in Windham, New Hampshire.

Corey worked as President Donald Trump’s election campaign manager from January 2015 to April 2016. He met Trump in June 2014 in New Hampshire at a political event. In January 2015, Trump called him up for a meeting at Trump Tower where he accepted to be his campaign manager for a $20,000 per month salary.

On June 20, 2016, Trump’s campaign announced it was cutting ties with Lewandowski after over a year of his association. Meanwhile, Trump’s son, Donald Trump Jr. said his departure was amicable.

Lewandowski’s husband, Corey Lewandowski often makes headlines with his legal issues. In December 2017, a US singer filed a lawsuit against him accusing him of sexual assault.

Singer Joy Villa, 34, said that Lewandowski hit her twice on her buttocks during an event in Washington in November 2017. The accusation came in the wake of #metoo movement that arose after several women accused Harvey Weinstein of sexual assaults.

Villa said she attended a gathering at Trump International Hotel in November 2017. There she posed for a photograph with Corey, whom, she says, she had met for the first time. Villa added Mr. Lewandowski hit her once on the buttocks and when she asked him to stop and joked about suing him, he spanked her again. Joy said the slaps felt “disgusting and shocking and demeaning.”

“I think as someone who has been through this, you understand that there is a due process and there is a process which they will go through to determine a person’s innocence.”

“I think you’ve been through, and you understand it and you respect it.”

In March 2016, Corey Lewandowski was charged with assaulting a reporter. A Breitbart reporter, Michelle Fields reported him claiming he grabbed her and nearly pulled her to the ground when she tried to ask Trump a question.

After the report, police arrested Lewandowski and indicted him on misdemeanor battery charges. Adam Brown, a spokesperson for the Jupiter Police said: “He was arrested and released with a Notice to Appear.” However, he was acquitted of all the charges the following month saying there wasn’t enough evidence to convict him.

Alison Lewandowski’s Husband’s Cheated On Her With Hope Hicks

In early 2018, Michael Wolff’s book, ‘Fire and Fury: Inside the Trump White House,’ was published. The book claimed that happily married and father of four, Corey Williams, and White House Communication Director Hope Hicks were dating on and off.

Daily Mail reported the book further claimed that Hicks was upset about Corey’s media coverage after he was dismissed from the campaign. The book also revealed some other things besides the Hicks-Lewandowski melodrama.

Where the book received widespread condemnation from the White House, the former White House Chief Strategist Steve Bannon reportedly was one of the key sources for the book. Bannon criticized members of the Trump clan, especially Donald Trump Jr. who had a notorious meeting with Russians at the Trump Tower.

What Is Alison Lewandowski’s Net Worth?

As a wife of a famous politician, Alison undoubtedly makes a good amount of fortune and lives a luxurious life. However, she has not revealed her net worth so far. On the other hand, her husband Corey Lewandowski is pretty wealthy with an estimated net worth of $50 million as of 2022.