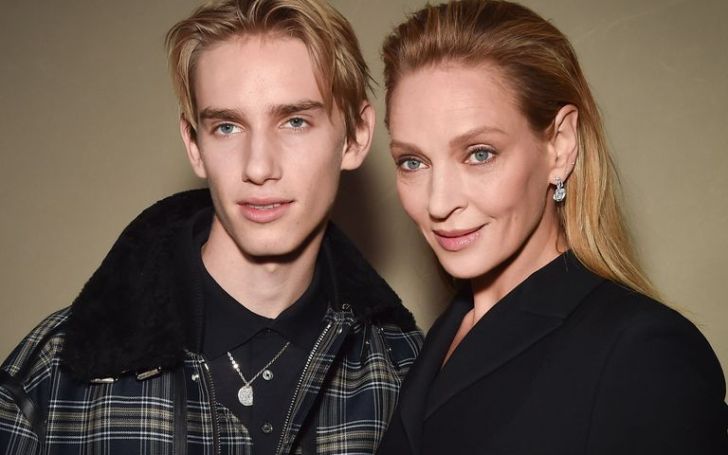 There are a lot of celebrity kids who are already following in their star parents’ footsteps. And then there are some like Levon Roan Thurman, son of Ethan Hawke and Uma Thurman. Unlike his sibling, he is yet to make a huge mark in the entertainment world. Well, seems like not everyone is cut out for the showbiz.

Nevertheless, he is only 18, meaning Levon still has a lot of time before jumping into anything. At the moment, he is busy studying and figuring out about his life.

Today let’s take a look at the life of Ethan and Uma’s son Levon and find out more about him!

Levon was born on January 15th, 2002, in New York City, NY. He is the second child between Ethan Hawke and his former wife, Uma Thurman. Besides, he is the godson of Richard Linklater, a film director.

The handsome bloke stands at a resounding height of 6ft 1inches. Both of his mom and dad are quite tall so it’s only natural he is blessed with height. His mother Uma is 5ft 11in, while his dad, Ethan is 5ft 10 in.

Now talking about Levon’s ethnicity, from his mom Uma’s side he has German, Swedish, Danish, Scottish, Irish blood. His dad Ethan belongs to English, Scottish, and Scots-Irish/Northern Irish. It is safe to say, he has mixed ancestry. As for his racial background, well, he is caucasian.

Levon studied at an elite private school in New York

As a star kid, Levon didn’t have any financial trouble growing up. In fact, he was brought in New York City, one of the most expensive places in the world. Likewise, he attended Saint Ann’s School, an elusive school in Brooklyn, NY.

As Levon is 18-years-old, it is more than likely that he is in his senior year or better yet graduated from high school.

Levon has one biological sister and three half-siblings

He has one biological older sister, Maya Hawke, 21. Unlike Levon, his sister has already set foot in the showbiz. She is a singer and an actress. Her most famous acting credit includes Stranger Things season 3.

Maya and Levon in the Mornin’

Apart from Maya, Levon’s has three other half-sisters. Two from his father’s marriage with Ryan Hawke, Indiana Hawke, born in 2011, and Clementine Hawk, born in 2008. And one another sister, Luna Thurman-Busson, born 2012. Uma shares Luna with her former fiance, Arpad Busson.

Levon’s mom divorced his dad in August 2005 after there allegations that he cheated on her with their nanny, Ryan. Ironically, he is currently married to her. They initially got married on May 1st, 1998.

Though they might be Levon’s half-sisters, he has a terrific connection with them. He has shared quite a few pictures with his half-sisters, from time to time.

So far, it seems Levon is quite happy with the way things are and has not committed to any type of relationship. As a teenager, there are chances that he might’ve had a few short-term flings, but no long-term affairs.

Scrolling through his Instagram feed doesn’t give out any information regarding a secret girlfriend or anything. He generally shares pictures of his parents, especially his mom, and siblings.

Other than that, his Instagram account is filled with his photos with friends or from any exotic getaways. Judging by his photos, we can say he is an outgoing guy and has a big friend circle.

Levon Roan Thurman-Hawke Net Worth and his Career

When we hear the term star kid, we automatically think about their lifestyle, which in most cases, is quite extraordinary. They have all the facilities many people can only dream of.

Similarly, Levon too has all the riches. Both of his parents are multi-millionaires. They have earned a substantial amount of money from their respective career.

His mom Uma as a net worth of $120 million, while her ex-husband, Ethan’s total fortune stands at $55 million.

Meanwhile, Levon has also tried his hands in the acting field handful of times. He has appeared in the short film, Blackout. Furthermore, he also made a small cameo in the series, Celebrities Uncensored.