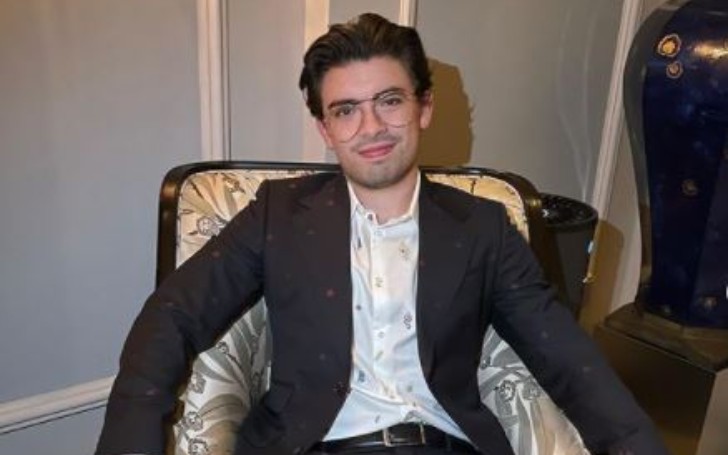 Michael Joseph Consuelos is an American star kid. He is the son of TV personality Kelly Ripa and actor Mark Consuelos. Considering how famous his parents are, he has been in the limelight since his birth alongside his two siblings, Lola Grace and Joaquin Antonio Consuelos.

As of now, the big boy has all grown up to be a fine handsome man. Moreover, the young man is slowly moving out from his parent’s shadow and making a name for himself. He has started working behind the scenes and even assisted his mom with her show, Live, during the 2020 pandemic.

We’re sure many of you are quite eager to know more about Michael so without further delay let’s get right into it. Find out his education, work, girlfriend, and more here today!

He was born on June 2nd, 1997, in New York, the United States as the first child between Kelly Ripa and Mark Consuelos. His parents are one of the most famous TV personalities.

Michael’s middle name was inspired by his maternal grandfather, Joseph Ripa. He has a mixed ethnic heritage being an Italian-Mexican from his father’s side and Irish from his mom’s side.

In addition to Michael, his parents are also proud parents of two other kids. A daughter named Lola Grace, born June 16, 2001, and another son named Joaquin Antonio, born February 24, 2003.  All three of the Consuelos siblings are incredibly close to each other all thanks to their parents’ upbringing.

Michael’s mother Kelly, in an interview with the PEOPLE magazine, talked about parenting. She argues that as you get older your parenting skill definitely increases. She said,

“As you get older and you learn more, that youngest kid hopefully benefits from a little bit more wisdom … and hopefully fewer nerves.”

However, as the three of them grew older, their mom and dad became softer and softer. “My parents have softened up a lot now that I’m in high school,” said Joaquin.

Well, in the end, everything turned out to be the way Mark and Kelly expected it to be. Their kids are doing great in their academics and professional life.

Michael Joseph Consuelos is interested in behind the scene work

The phrase Apple doesn’t fall far from the tree is quite accurate here. Michael is a graduate of the prestigious New York University’s Tisch School of the Arts.

He graduated from college in the year 2020 and due to Covid, the graduation ceremony was held virtually. Though many students were kind of disappointed that they couldn’t have a traditional graduation ceremony, Michael wasn’t bothered at all.

Talking about his specialization at college, he primarily focused on directing, writing, and acting. It is highly likely that he will become a multi-faceted individual just like his parents.

When the 2020 pandemic hit, everyone was barred to stay inside their home. Amid stay-at-home orders, Kelly shot her show, Live! from her residence. Fortunately for her, Michael was there to assist her with behind the scene work.

In one of her, work from home segments of the show, she revealed that Michael has been incredibly helpful. She said,

“Michael has been producing my end of this show. He really is sort of working while he’s finishing because he’s set to graduate from college … I said to him, ‘Well look at you. I mean here you are, you’ve got a job before graduation. That’s got to make you feel good.’ He’s like, ‘Uh, yeah.'”

Some fans started speculating that Michael was actually hired by the network to do the producing, but that wasn’t the case. Ripa cleared out all the rumors and said her son is not getting paid for his work.

Michael Joseph Consuelos played the younger version of his dad in the series, Riverdale

Being the son of one of the best actors in showbiz, Michael also possesses the same acting skill as his parents. He started his career back in 2004 when he lent his voice for a character in the animated short series, Duck Dodgers. A few years later, he also worked as a voice actor for Go, Diego! Go.

Nevertheless, he gained wide acclaim after he appeared in the series, Riverdale. He portrayed the role of Hiram Lodge as a teenager in Chapter Thirty-Nine: The Midnight Club. For those of you who don’t know the older version of the character, Hiram Lodge is played by none other than his dad, Mark.

Its a dream for every actor to work together with their child and Mark was able to work with his boy.

Is Michael Joseph Consuelos dating anybody?

No, it looks like he doesn’t have a girlfriend at the moment. The handsome guy is active on Instagram and he is yet to reveal anyone as his partner on social media.  Then again, if Michael ever has a girlfriend or a boyfriend we will definitely hear it first from his mom. She is quite open to her fans when it comes to her personal life.

Besides, he is relishing his single life. Since graduating, he is definitely focusing more on his career rather than his dating life.

While talking on the same subject of his personal life, for the past couple of years loose talk regarding his sexuality has been making rounds. There are rumors that he is gay.

These speculations might’ve stemmed because of his mom’s open support to the LGBTQ community for which she even won an award. Whatever the case may be, until and unless he himself or a member of his family says anything on the matter, all we can do is speculate.

It’s not a surprise to know that he grew up in a rich household, however, he has not revealed his net worth at present. His mom and dad were already making a decent amount of bucks at the time he was born. As of now, Kelly and Mark are worth more than $100 million.

The Consuelos family lives in New York, which is probably one of the most expensive places across the country. They sold their SoHo house for a whopping $20 million in 2015 and moved to a townhouse in the same city. They purchased their new pad for a staggering $27 million.

All three of their children enjoyed exotic vacations while growing up. The family used to go on a vacation every once in a while.

Kelly once said her son was broke

Michael moved out of the house after he joined college. If come from an average household then you can’t ask for money from your parents on a regular basis, that’s how it goes. And also, not everyone is able to afford to send money.

But you’d think that celebrity kids like Michael don’t have to worry about it at all. Well, that’s where you’re wrong. His mother Kelly, in one of her segments, stated her son is having difficulty making ends meet.

She said, “I think he loves the freedom. He hates paying his own rent, and he’s chronically poor. I don’t think he ever really experiences extreme poverty like now.”

Of course, Kelly was joking but Michael is a hardworking guy. In the same segment, she also mentioned that he has a full-time job.