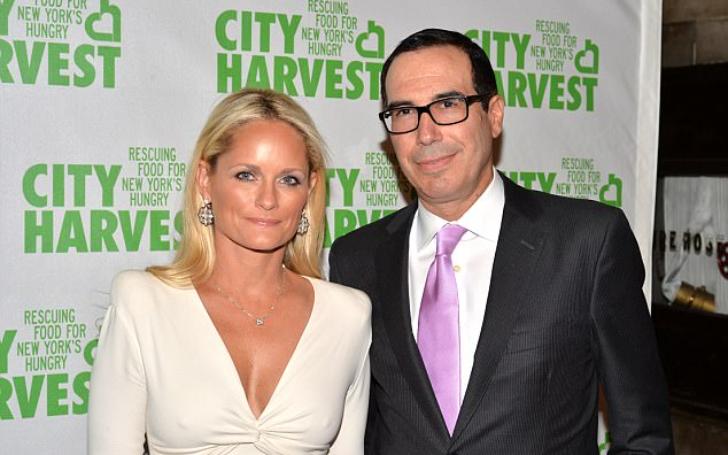 Heather deForest Crosby is the first wife of the American politician, Steven Mnuchin. Steve is the 77th US secretary of the Treasury. The republican party member divorced Heather a few years ago.

Ever since Heather and Steven went their separate ways people have been curious to know about her current whereabouts. What is she doing now? Is she married to someone just like her ex-hubby? What happened to her three kids with Steven?

Heather was born in New York, the US, as the second daughter of Virginia Duel Crosby and Henry Ashton Crosby Jr. Unfortunately, she lost her father Henry in 2015. He passed away at the age of 75. Henry used to work as an English, Latin, and theatre teacher at Rippowam-Cisqua School in Bedford. He was an NYU graduate.

Besides, Heather practically spent her entire childhood in NY. She has an older sister named Jennifer Crosby Cargill. Jennifer currently works at Southport Galleries. She is a married woman with two kids.

Moving towards her ethnicity, Heather is of Caucasian ethnicity. She has Scottish ancestry.

What Is Heather deForest Crosby age?

Heather deForest Crosby Career: He Is A Business Professional

Unlike her ex-hubby who is a politician, Heather is a business professional. So far, she has held big management positions. At the time of her wedding in 1999, she served as the Vice President for Corporate Communications at Launch Media. The company generally deals with internet music, music information, and news. She joined the firm, which was later bought by Yahoo Music, in 1998.

She also worked in the advertising department. She was an assistant to an accounting executive. Aside from that, she also did publicity and marketing for Planet Hollywood.

It was back in 2001 when Heather decided to retire from her long-tiring work and raise her kids. Since then, Heather has not had a big job. Still, this doesn’t mean she is not anything at all.

Sometime after her retirement, Heather became a Yoga teacher. She even has her own clothing line-up named AZIAM. The company was first founded by Crosby’s Yoga teacher and friend, Alanna Zabel. Later on, Heather collaborated with Alanna.

As Heather is a big-time philanthropist, ten percent of the proceeds from her clothing line-up will go towards the charity, Joyful Heart Foundation.

Of all the things she has accomplished in her life, Crosby is most famous for her marriage to Steven Mnuchin. Her husband is the 77th US secretary of the Treasury.

As for the guests, many of the duo’s closest pals and family members were in attendance.

Heather Has Three Children With her Ex-Husband

From their marriage, Heather and Steven welcomed three beautiful children, two daughters, and one son. The name of their children is Emma Mnuchin, John Mnuchin, and Dylan Mnuchin. Two of their kids, Emma and John are fraternal twins. Dylan is the oldest one.

All three of them have grown up. They studied at the John Thomas Dye School. Two of the three Mnuchin’s also went to the K-12 Brentwood School.

Heather and Steven divorced in 2014: Their divorce settlement

After remaining in a marital relationship for around 15-years, Heather deForest decided to divorce her former husband. Their divorce was finalized in 2014. Going by Heather’s social media profile it looks like she has custody of their three kids with Steven given the usual visitation rights.

Now many of you might be wondering how did the divorce settlement go down? Well, there is no accurate answer to this question but we can say Crosby was given a hefty sum from the settlement.

How much is Heather deForest Crosby’s net worth?

The former politician Steven Mnuchin’s spouse Heather is not involved in a career since 2001 which makes it quite hard to ascertain her total wealth. Even so, we can safely assume her fortune is well above the $1 million mark. How?

She owns a sprawling mansion in Beverly Hills. She bought the residence in 2017 for a staggering $12,950,000, or around $13 million. The house has a total area of 9,167 square feet. She currently resides here as well.

In addition to her current residence, she once owned an $8 million Mediterranean-style mansion. She bought the property in 2014 and sold it for more than $2 million in profit in 2017.

Aside from herself, her ex-hubby Steven, who is a big shot on Wall Street has a whopping net worth of $300 million.

Who is Heather deForest Crosby dating in 2022?

As of 2022, Heather is in a relationship with a man named David Ford. Apparently, the two are in a long-term relationship. She is not active on her social media handle because of which there are no photos of her boyfriend.

In the meantime, her ex-spouse is married to his third wife Louise Linton since June 24, 2017. Louise is a Scottish actress who is famous for her work in the series, Intruder, Cabin Fever, and more. Steven’s first marriage was with Kathryn Leigh McCarver. He married her in 1992 and they divorced in 1999.

The Internet is a place where you can find all the information about virtually anything. But this doesn’t mean you can just trust anything the internet has to offer. Likewise, there are a few tabloids who are completely spreading misinformation regarding Heather.

Many tabloids have mistaken Heather for the food vlogger who incidentally has the same name, Heather Crosby. They have mentioned that she is based in Chicago but that is all wrong. Well, first of all, Steven’s wife Heather is not a food vlogger and second of all, she lives in Los Angeles and not Chicago.