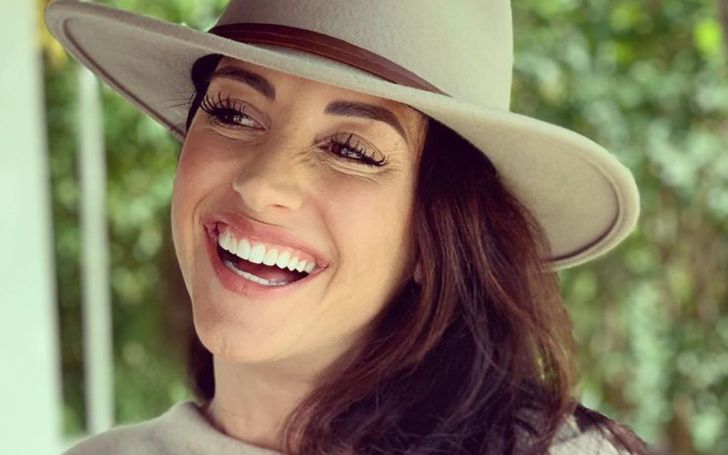 Emily Compagno is one of the famous contributors in FOX News. A regular at the news channel, the beautiful attorney is already in a long-term relationship.

Here today, let us discuss her personal life and find out about Emily’s husband and if they share any kids. Also, find out how and when the couple met for the first time?

Who is Emily Compagno husband? Details on Boyfriend-turned Hubby

Yes, the Californian native is in a blissful marital life. In fact, she has been married for around 3-years now. Back when news of her secretive wedding came to be, fans were in a literal shock.

Nevertheless, after photographs from her matrimonial were released, there is not much to debate.

I’ve been married one day and my husband leaves his ring in the hotel room 🙄 pic.twitter.com/8Cdmego9Qq

Judging by the photo and the caption, it is safe to say, she and her hubby exchanged vows in late 2017.

By the By, Who is Emily Compagno Husband?

As we mentioned earlier, The Five’s host refrains from revealing any sort of private information to the public. However, we’ve just the information about her partner.

In addition, he studied at the University of Washington and graduated with a B.A. in Political science and communication.

Initially, he finished his schooling at Seattle Preparatory School in 1996 and enrolled at the uni.

The contributor mentioned the couple first met when they were teenagers and reconnected 4-years before their nuptials. Ever since reconnecting, the lovebirds dated secretly.

Interestingly, Emily and Pete studied for the same degree at the University of Washington around the same time, so they might’ve come across each other then.

About the Nuptials, the Destination and the Wedding Dress

The beautiful ceremony took place in Villa Cimbrone, Italy. Emily who hails from an Italian family chose Italy in order to pay tribute to her family’s heritage.

What’s more, they said their ‘I do’s’ at the outdoor Tea Room Pavilion. Filled with flowers, a solo violinist played in the background as they read their vows.

The very next morning, they hired a private speed boat and visited Amalfi Coast and Positano.

Besides, the pair didn’t invite anyone but the photographers to the event. The photos were exclusively taken by Jos and Tree WoodSmith of JOS Studios.

Just the two of them flew to the Southern European country for the wedding.

Now moving towards their dresses, both Emily and Pete looked stunning in their custom-made attire.

For Emily, she wore the Firenze gown designed exclusively by Suzanne Hanley. On the other hand, the groom donned a custom-tailored Navy Tuxedo with gold cufflinks.

In Emily’s dad’s Sicilian tradition, the groom’s dress is handed down from groom to groom. Furthermore, he wore a watch gifted by Emily which had the engraving, ‘ti amo per sempre: I love you forever.’

Do Emily and Pete have any plans for kids?

Well, it looks like they are not yet ready to become a parent yet. It has been over 3-years since they said their ‘I do’  and till now no sign of any children.

Regardless, Emily is yet to openly talk about bearing any kids in the future. Guess we’ll have to wait it out.

What ethnicity is Emily Compagno?

She belongs to the Italian-American ethnicity.

What is Emily’s Net Worth?

Was Emily a cheerleader?

Yes, she was the cheerleader at Oakland Raiders.

Does she appear in The Greg Gutfeld Show?

Yes, she often appears in the show alongside, Kat Timpf and Tyrus.

Who is Emily Compagno? Everything About Her Parents, Sisters, and More..