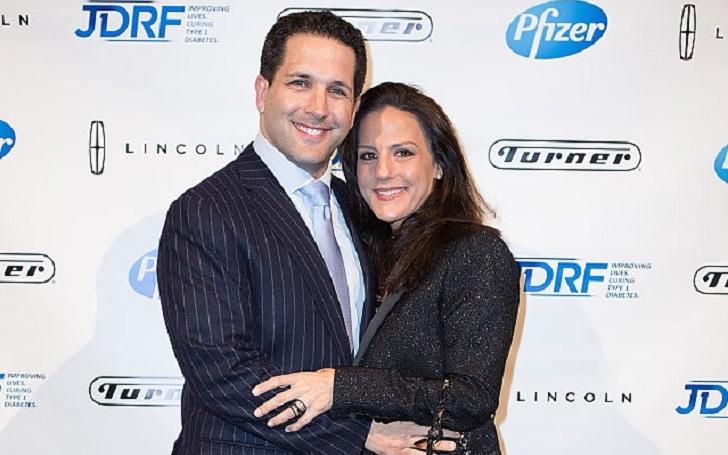 Adam Schefter is one of the prominent faces in the sports media. The accomplished football analyst has been working for ESPN for a long time now. He also has published a handful of books including a popular one ”The Man I Never Met.”

Needless to mention, there is always someone behind every person’s success. The same could be said for Adam’s wife Sharri Maio (aka Sharri Maio Schefter). He himself said, “She has challenged me and made me a better husband, a better father, and a better reporter.”

Besides, the love story Sharri and Adam have been sharing for years is also more accentuated. Then, let’s explore everything about Adam’s wife including her first marriage and other family details!

Sharri Maio was born Sharri Brooke Setty on 29th May 1969, in Syosset, York. She is the daughter of Joann Forman Setty and Charles “Chuck.” She spent the major portion of her childhood in Syosset with her parents and siblings.

Setty holds an American nationality and is a Caucasian as per her ethnicity.

The former couple first met in the Hamptons in 1993. They subsequently began their love affair and were in a romantic relationship for years before tying the knot in 1998.

In June 2000, the two also became parents for the first time after their son Devon was born in June 2000. He attended North Shore Senior High School and graduated in 2018.

The young boy currently studies economics at the University of Michigan, Adam’s alma mater. He is also doing an internship as an analyst at Innovation Advisors.

Her Husband Died in a 2001 World Trade Center Attack

Everything was going fantastic between Sharri Maio and her first husband Joe until his sudden death in the World Trade Center attacks (America’s single-worst day of terrorism) on September 11, 2001. He used to work on the 105th floor of the North Tower.

Around three thousand people were killed in the attack. After the terrific incident, Joe called his wife two times, telling her he loved her so much the first time and the second time he told her what was happening.

While writing The Man I Never Met, Adam also did the finest research about Joe. He told Newsday that Joe “was a golden boy. He was charismatic. He was smart. He was successful. He was handsome. He was charming. He was sensitive. He was beloved. He was respected. Honestly, he was the kind of guy you’d want your daughter to marry.”

The book highlights the circumstances that Schefter faced and his love story with Sharri.

Know Something More About Joe Maio

He was born Joseph Daniel Maio on December 21, 1967, in the United States. He was the son of George and Paula Maio. Joe a Boston University graduate previously worked in Tokyo and London. He later landed the job as the director of equity derivatives with Cantor Fitzgerald in New York.

Love Story of Sharri Maio and Adam Schefter: When did they first come across?

Sharri met Adam for the first time on a blind date on Long Island in July 2006. Adam recalled the beginning of their love story, saying it was an immediate connection,

“There was, I believe, an instant chemistry because shortly after we began dating, Sharri started wearing her (insulin) pump, which she was always apprehensive about wearing.”

“I think we were comfortable enough with each other that she basically knew it was the best and right thing to do.”

At the time, the life of the then 9/11 widow, Sharri raising a son Devon as a single mother after her husband’s death was too complicated.

Also, a man who linked to her had to deal with her worst past and Adam was ready to face all challenges.

Sharri Married The Second Time To Adam: Does The Couple Have Children?

Sharri and her second husband Adam after around one year of their dating got married in 2007. In fact, it’s been around 13-year since they are in a marital relationship but their love story still looks stronger than ever.

They have a son Devon and a daughter named Dylan, who was born in October 2008.

Adam Highly Praised His Wife’s Role in the Family

Sharri is the true star of their family including Adam and their two children. She is an extraordinary wife, mother, caretaker, homemaker, and baker as well. Adam said,

“Without her, nothing gets done. Sharri is this family’s superstar.”

Furthermore, the 9/11 widow helps her man professionally too. Schefter was working at NFL Network which he called “a 5 am-to-9 pm job — and then some” when they first met. Sharri later helped Amam to make his move to ESPN. The sports analyst said,

“She’s helped push me to the professional position I am in today.”

She also takes care of their three dogs Ella, Bailey, and Bennie. Their puppy Maggie passed away in March 2020.

“She’s the forewoman of the house. She makes sure everything runs smoothly. Two kids, four dogs, one house, none of it runs without her. There’s no way. She makes it all happen.”

What Happened to Sharri Maio Schefter? Her Health Problems

Sharri was diagnosed with gestational diabetes while pregnant with her child Devon, a condition in which your blood sugar levels become high during pregnancy. Similarly, a year after her great loss (Joe’s passing), she was diagnosed with adult-onset Type 1 diabetes.

Like his wife, the sportswriter also married an unknown woman in the past. However, Adam has never talked about his first marriage. So the details of their wedding and the reason behind their separation are still out of the public glare.

While Sharri’s net worth is yet to be revealed, her hubby Adam has an estimated riches of $4 million. The majority of his wealth he mainly makes from his prolific journalism career. Besides, he is paid a salary of $1.2 million a year.