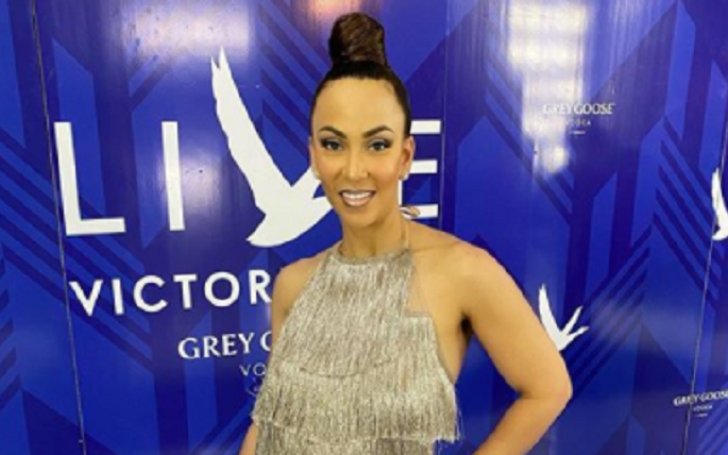 Jodi ‘Jinx’ Stewart (aka Jodi Stewart) has been involved in the entertainment business for years now. She currently serves as a host at Reggae Entertainment Television (RE-TV).

Stewart gained wide popularity after her marriage to Sean Paul. Her husband Paul is a dancehall recording artist and is regarded as one of the most prolific artists in the Jamaican music industry.

The power couple has also been leading a happy married life for a long time. Does the pair share a child between them? Find out the answer to this question and many other interesting facts about Jodi.

Stewart has been a part of Reggae Entertainment Television for years. During her association with the company, Jodi has held a number of jobs. She worked as an English-speaking VJ on The Roof’s episodes. The show premiered all over Latin America.

The TV personality also hosted the RE-TV’s flagship show, VIP Backstage. She took interviews with many well-known celebs at that time. Stewart then appeared on RE View as well as co-hosted BET’s J’s Video Countdown. Moreover, she hosted an entertainment news program E-Weekly.

In addition to her TV works, Sean Paul’s wife is a model who featured on the cover of Appleton Magazine and in the international men’s magazine, Maxim.

Jodi was Once a Teacher

You might be surprised to learn that Henriques previously worked as a teacher. She also has earned a degree in the same field. She told that her years of teaching experience helped her a lot to become a good mother. Stewart told,

“I have a degree in early childhood education. My years of teaching were the most rewarding years of my life. If I could, I would go back in a heartbeat, because it would help me to become a good mother. Nearing the end of my teaching years, I joined RETV.”

Initially, Jodi also didn’t have any plans to pursue a career in media but coincidentally it all happened when Jodi attended a party where she partied with three other individuals who worked at RETV. They saw her energy and offered her a job at the company.

The couple tied the knot on 26th May 2012 at the Boone Hall Oasis, St Andrew. A source close to the couple told that they walked down the aisle in a very low-key wedding ceremony in front of family members and close friends.

Stewart opted for a strapless custom gown while the groom looked dapper in a black three-piece Dolce & Gabbana suit. They later left the island for their honeymoon on the Fresh Polynesian Island.

The two happily married ever since. Celebrating their 8th marriage anniversary, Jodi posted a throwback wedding photo with her spouse on Insta. She wrote,

“It was at this very moment that he realized he should have run!!! Thanks for sticking it out with me @duttypaul I promise to always keep things exciting!!! Happy Anniversary ❤️ 💎Married 8 years 💍Engaged 1 1/2 years 👩‍❤️‍👨 Dating 8 years.”

Besides, Jodi Stewart’s husband Paul expressed his gratitude to his spouse for being supportive despite his busy schedule. He said,

“Nothing’s quite changed. It’s just made me a more happier person and as I get time from my busy schedule, I run back to them. I have my wife who’s very supportive and been there throughout. She has blessed me with a baby boy Levi.”

How did the two first meet?

Stewart met her future-hubby Sean just a night before she left the island to study in Denmark. They came across when Jodi went to Grasshoppers off Constant Spring Road and Paul sent his pal over to ask her if she wanted to feature in his video.

They subsequently got acquainted with each other but remained friends for some time until the two began dating in 2002. The pair got engaged after dating for years in 2011.

The couple is blessed with two children. Sean Paul’s wife gave birth to their first child, a son Levi Blaze Henriques in Feb 2017. The artist announced the huge news by posting a photo of their new bundle of joy on Instagram. Paul captioned the image,

“AN THEN THERE WERE 3 BIG UP MI SON THE REAL BOSS LEVI BLAZE HENRIQUES AN MY WIFE THE BOSS MOMMY.”

The couple announced they were expecting their first child back in August 2016.

Sean and Jodi welcomed their second child, a daughter Remi Leigh Henriques on 20th August 2019. She weighed 8 lbs., 7 oz at the time of her birth. They announced the pregnancy in Feb 2019.

The family of four currently resides in Kingston.

The celerity spouse was born on 13th November 1982, in Jamaica. She is the daughter of Nandi Stewart. Her mother Nandi, a Kingston native, went to Immaculate Conception High School. She currently serves as a Librarian at the same school.

Besides, Jodi sporadically shares photos of her father on a few occasions. She uploaded a childhood photo with her dad on the occasion of 2017 Father’s Day.

Stewart grew up along with two siblings. She has a sister named Traci Stewart Roman and a brother, T-Stew. Traci has been married to her husband Scott Nicholas for a long time.

Jodi has an estimated fortune of $500,000. She has racked such a good wealth from her multiple professions. On the other hand, her life-partner Sean has a $25 million net worth.