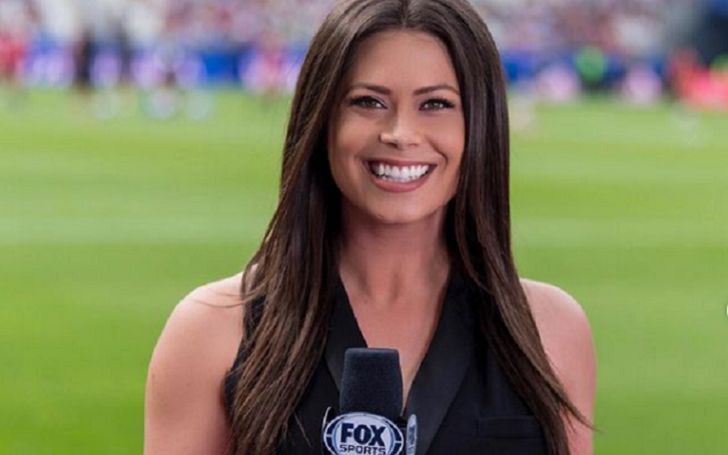 Alex Curry is one of the quickly established youngsters in the media field who currently serves as a host of Angels Weekly and Kings LIVE on Fox Sports West. Prior to Fox Sports, the media personality has also worked for a few other well-known networks like NBC.

Grew up in a strict family environment along with her three sisters, Curry had multiple interests as a child but down the line, she treaded for the TV. Her father is the owner of natural energy drinks company while her mother founded Growing Great.

In addition, Alex has been in a beautiful marital relationship with her longtime husband Jeff Nisen. Let’s straight dived into her detailed professional and personal life!

Who are Alex Curry Parents? Grew up in a Strict Household With Her Sisters

Alex is the oldest daughter of Peggy and Tim Curry. She spent the major portion of her childhood in her natural-living family in Sand Dune Park, North Manhattan. Her mom and dad raised her to be appreciative of nature and enjoy playing out in the field.

Curry’s mother supports GrowingGreat, a non-profit organization in Manhattan Beach that helped to empower kids to make healthy food choices through hands-on science. On the other hand, her father Tim is the founder of a natural energy drinks company.

In an exclusive interview with Easy Reader, the sideline reporter said that her family was quite health-conscious. She said there was only organic food available at a home,

“I appreciate it now, but growing up it was hard, because nobody else ate organic – seriously, who packs fruit with carrots to take to school?. I am so thankful for it now, but it was an interesting journey, the health nut route.”

Furthermore, another strict rule of the family was how much and when the children should watch television. Curry told the tabloid that the family members used to watch Rug Rats and Doug. She has three younger sisters and all of them share a strong bond with each other.

Talking more about Alex Curry’s family, her late grandfather, Curry served in WWII and was the First Lieutenant ARMY Air Corps. Back in November 2020, the media personality shared a collage of photos of her late grandpa on the occasion of VeteransDay.

Where is Alex Curry From? Her Childhood and Ethnicity

Curry was born on 27th May 1987, in Manhattan Beach, California. She spent most of her childhood in her hometown of Manhattan with her three sisters. Alex, 33, has an American nationality and belongs to Caucasian ethnicity.

Early Interest in Sports and Art

Alex developed a strong passion for sports. She was heavily involved in a wide variety of sports that include soccer, tennis, and volleyball. In addition, the sports enthusiast was also interested in the theater too. She loved public speaking which also helped her to enter the field of sportscasting.

“I love performing, I love talking. I’m a really quick memorizer. I can figure out what I want to say in my head and just say it.”

Alex was always interested in sports, but her passion for soccer was above all the sports she played as a child. Following her passion, she heavily played soccer while studying at Mira Costa High School, in Manhattan Beach.

The standout athlete then went on to enroll at San Diego State University, where she was a member of a national championship soccer team. She also led the group to win a NIRSA National Championship in 2006.

In addition, while Curry was still at SDSU, she started working as an all-purpose production assistant behind the scene for the Joe Lewis Production Company and Fuel TV.

She completed her graduation in 2009, obtaining a bachelor of arts in media studies and a minor in marketing.

Who is Alex Curry? Her Longtime Association with Fox Sports

Curry is a sideline reporter who started her media career working as a host and writer of the SWOOP Magazine in April 2009. She also appeared in its editorial.

In July 2011, she landed the job as a host of the World University Games on NBC. She covered the summer and winter games in Russia and Italy. Additionally, the media personality served as a host of ‘Tailgate 48’ on Big Ten Network. In the meantime, she covered the Celebrity Beach Bowl for Direct TV at Super Bowl XLVIII in New York City.

Besides, Alex spent around three months co-hosting Inside Alli Sports. She then joined Game Changers, where she worked from June 2011-July 2012, playing multiple roles ranging from an executive producer to host to the writer.

In early 2012, Curry secured her coveted spot at Fox Sports West working as the host of Angels Weekly and Kings Weekly. Two years after, she began working as the reporter for both the Angels and Kings telecasts. The same year, she covered the Kings 2014 Stanley Cup championship.

Prior to Fox Sports, she also co-hosts ‘American Ninja Warrior: Ninja vs. Ninja’ on USA Network.

Who is Alex Curry Married To?

Curry has been in a blissful marital relationship with her husband Jeff Nisen for years. The couple tied the knot back in July 2016. Their renowned wedding ceremony took place in Manhattan Beach, California which was attended by their family members and close friends.

As per some genuine online sources, the then-newly-wedded couple jetted off to Ibiza, Spain for their honeymoon. There, the duo spent a couple of weeks.

Alex and her longtime spouse Jeff are childhood sweethearts as they both grew up together in Manhattan Beach. Judging by the strong connection they have been sharing since childhood, it a safe to say they are leading a happy married life.

They often shares adorable photos of themselves on their social media handles. Back in July 2020, celebrating their 4th marriage anniversary, Alex’s husband Jeff uploaded a beautiful photo of the lovebirds from their big day.

The loving duo currently resides in Southern California. Besides, despite being in a relationship for a long time, they are yet to become parents of a child.

Who is Alex Curry Husband Jeff Nisen? Dedicated His first song to His Wife

Jeff is a multi-talented guy who has built a successful career as a singer, songwriter, and guitarist. He is also known as a beer drinker. Born and brought in Manhattan, the artist started playing guitar since 12. He made his professional debut shortly after his graduation from UC Santa Barbara in 2009, forming a band, Sand Section with his two best friends.

The band released its debut album, ‘Truth Over Harmony’ in 2010, followed by two more albums before the band was dissolved in 2013. Jeff later formed the rock band Lose Control.

In addition, the artist released a single ‘Turn out the Light’ on 17th April 2020. He describes the single as a ‘love song’ that placate his wife.

Her net worth is $1 million. The major portion of her wealth mainly comes from her extensive media career and many other endeavors. She is reportedly paid a salary of $72512 from Fox Sports West.

Like her mother, Curry is also following the same passion for humanity. She works with the Richstone Family Center. She also supports its Kids Club After School Program. Furthermore, the TV host serves as a volunteer for her mom’s non-profit organization GrowingGreat.