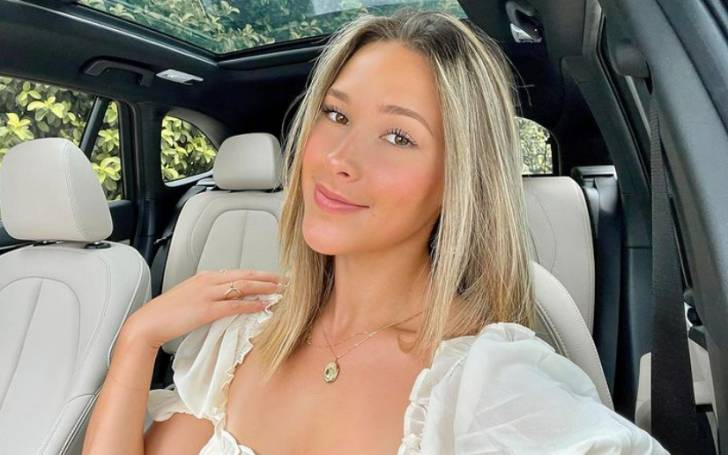 Allie Schnacky is a social media personality, influencer, and model who has a huge fan following on her social media platforms like Instagram and TikTok. So if you are into similar kinds of stuff, you might know her. She is recognized for her dance, sketches, comedy, and prank videos on her social networking sites.

TikTok star, apart from her social media, also works as an actress in various films and television series. She is popular for her performance in Golden Gates, BubbleGum Smackers, and Pathways the Trilogy: Choosing Fate. Also, Schnacky is equally famous as the sister of Noah Schnacky (singer) and Colby Schnacky (TikTok star).

Despite being a media personality, Allie prefers to keep her dating life away from the limelight. There are rumors that Allie is dating her fellow social media star, Austin Armstrong. Find out if the news is true. Continue reading the article below to learn everything about the social media star.

Who Are Allie Schnacky’s Parents? Her Age

Allie is the daughter of Lance Schnacky and Kim Schnacky. Her father is a singer, songwriter, musician, and actor who spent many years contributing to various fields. He is a graduate of Dr.Philips High School and North Central University.

Growing up in her hometown Orlando, the social media icon holds American citizenship and belongs to the Caucasian ethnic group.

Are Allie and Noah Schacky Related? Her Siblings

Yes, Allie is related to Noah Schacky who is her elder brother. Her sibling is an American social media star, singer, actor, and songwriter.

Besides Noah, Allie has three more siblings. She has another brother named Colby Schnacky who is also a TikTok star by profession. She also has two sisters, Ella Schnacky and Marie Schnacky.

Where Does Allie Schnacky Go To College?

Allie attended Valencia College, where she was active in activities like water polo, dance, and competitive swimming. While at college, she also became a part of societies like a small group leader, theater, and the National Honor Society. Back in December 2018, she posted a picture of her graduation with her dad on her Instagram.

Previously, the 22-year-old went to a public elementary school until she was 13. In the meantime, she also got the role of Pippi Longstocking in a play but her school wasn’t that flexible to allow her to be absent often to perform in the project. As a result, her parents enlisted her in Florida Virtual School so that she can follow what she loves.

When I was at my regular school, they’d get mad at me and tell me I wasn’t allowed to miss anymore, but (theater) is my passion.”

What Does Allie Schnacky Do For Living? Career Highlights

Allie is a renowned social media personality by profession. She always wanted to pursue her career in the entertainment industry. At the age of 6, she started acting playing the role of Chelsea in the production of Gooney Bird Greene.

Furthermore, Allie is also a skilled dancer and vocalist who has so far participated in numerous regional and national competitions, winning lots of awards. Back in 2010, she appeared as a dancer on the television series Extreme Makeover: Home Edition.

The same year, the 22 years old also had an uncredited role in the film Letters to God. She is also known for portraying the character Tess on the TV series Golden Gates (2010-2011) starring Gail Golden, Nick Mazzini, and Dulaney Sundin. Moreover, her other credits include Cooked, BubbleGum Smackers, and Caught in the Middle.

Aside from her acting and social media career, Allie Schnacky has worked as a volunteer in philanthropic fundraising services and organizations like ‘Give Kids The World Village (Dec 2016-2017) and Salvation Army (Dec 2015-Dec 2017).

How Famous Is Allie On Social Media?

Golden Gates‘ alum is quite popular on social media platforms. Currently, Allie is available on Twitter with 3,592 followers and on LinkedIn also. But, Schnacky is mostly popular on Instagram and TikTok with over 712k followers and 96.1k followers respectively.

On these platforms, Allie often uploads her personal as well as professional photos and videos. She is loved and appreciated for her dance, sketches, comedy, and prank videos.

Additionally, Schnacky also runs a self-titled YouTube channel. She created the channel in May 2013 which currently has 2,403 uploads, 632k subscribers, and 619,715,650 total views.

Personal Life: Is Allie Schnacky Dating Anyone In 2022?

Schnacky relationship status is quite confusing at the moment. She has yet to confirm if she is dating anyone or not. Although in her sibling Noah’s vlog, one of their mutual friend named Austin Armstrong said he liked her. Furthermore, in one of her brother’s videos, Noah even pranked Armstrong saying that Allie is gonna ask him out but before she could say something Austin asked her out.

In fact, both Allie and Armstrong are best friends. They both often appear in their video pranking each other or completing some challenges. In February 2022, Austin asked her for a date for Valentine’s Day and they both went on a double date with their friends.

Despite all that, they have never disclosed themselves as boyfriend and girlfriend. Further fueling their possible growing romance, Austin frequently keeps confessing his feelings for Schnacky and they often spott hanging together out and making trending couple videos on social media platforms.

How Much Is Allie Schnacky Net Worth In 2022?

Well, the actress herself has never disclosed her fortune details to the media. However, Allie Schnacky is believed to have an estimated net worth of $3 million in 2022.