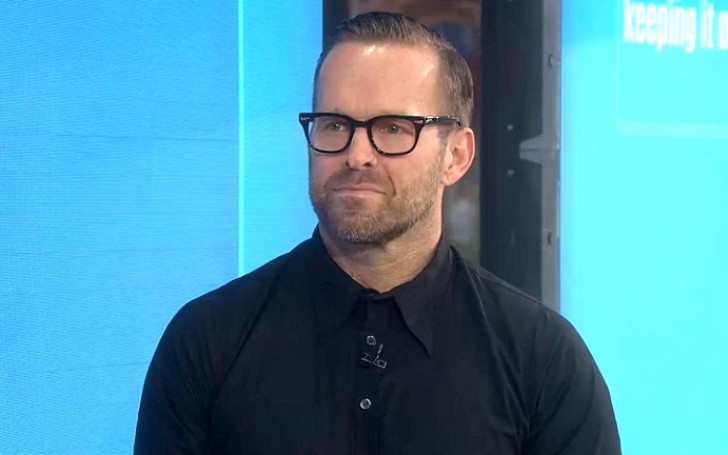 Bob Harper is one of the skilled fitness trainers who rose to fame after joining the popular American competition reality show The Biggest Loser as a trainer in 2004. Besides, the reality TV personality is also an accomplished yoga teacher as well as an author.

Moving towards his love life, Harper has been in a wonderful relationship with his gay partner for years now. Let’s know how long have they been dating? Or have they already turned their relationship into marriage?

Let’s straight dived into the story!

Is Fitness Guru Bob Harper Married? Who is his Spouse?

Bob Harper is yet to be married. But, the fitness guru is in a loving relationship with his longtime partner Anton Gutierrez. In late June 2019, the couple got engaged. Harper announced the huge news posting the photo of each other’s hands wearing matching gold wedding rings. He captioned the photo,

Well this happened yesterday. A great combination of @cartier & @viacarota

He tagged jewelry retailer Cartier and an Italian restaurant Via Carota in New York on the photo. Bob added the hashtags “#loveislove” and “#pantherring.”

Furthermore, Harper’s possible future spouse Gutierrez also uploaded his own photo on Instagram with the caption, “I can do this forever.”

After the news went viral, many tabloids claimed the couple got married. However, they are yet to confirm whether the two have exchanged their vows or not. Talking to Page Six, Harper told,

The statement above states the couple has no plans of getting married at this moment.

Harper after years of struggles with his sexuality came out as gay on his show The Biggest Loser in late 2013. The television personality told in its episode, “I haven’t talked about my sexuality on this show ever. I really do believe this is the right time.”

The popular TV personality stated he came out at the age of 17. He said, “knew a very long time ago that I was gay.”

Relationship with Anton Gutierrez: When did the couple begin dating?

In 2014, Harper’s dating rumors with Anton Gutierrez began swirling on the web after Anton shared their first photo on Instagram on 11th August.

Furthermore, Bob’s then mysterious boyfriend Gutierrez Instagrammed their second photo on 1st September. He appeared to be kissing his heavily tattooed partner Bob.

The duo kept their relationship out of the public eye for a year before making it official when they were spotted sharing a super sweet kiss in West Hollywood, California in November 2015.

The following year, Harper and Gutierrez featured together on Oprah: Where Are They Now‘s episode. They talked about their roles in the kitchen on the show. Bob told Anton, “He is a great sous-chef. He does everything that I tell him to do.”

Gutierrez said of Harper jokingly, “He just likes to boss me around in the kitchen,” and Bob agreed, “It’s true. It’s true.”

The Two Lives in Hollywood Hills

In early 2017, the trainer suffered a fatal heart attack that made him comatose for a couple of days. Thankfully, Bob survived the attack. He spent months at-home recovery. In the meantime, Harper, nonetheless, also battled depression.

Is Bob Harper Gay? What Is His Relationship With Partner Anton Gutierrez?