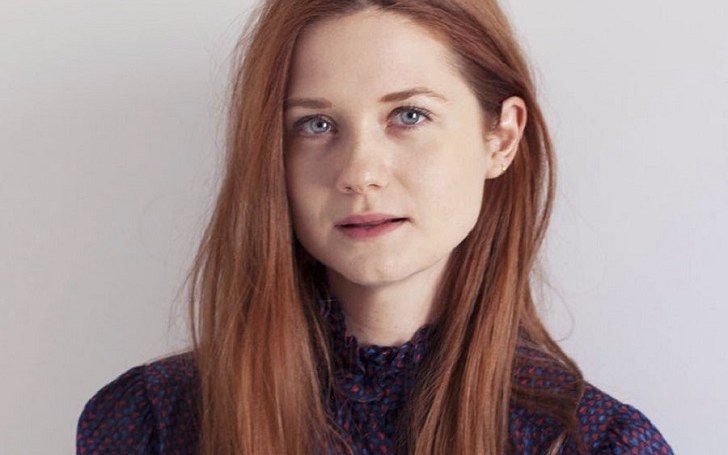 Harry Potter actress Bonnie Wright‘s love life seems to be a little more complicated than it seems. However, the actress has completely kept every detail of her romance away from the spotlight for the past few years.

Initially, the actress made a lot of buzz after her romantic relationship with boyfriend-turned-fiance Jamie Campbell Bower. Their romance became a hot topic across the media back in 2010.

The then-engaged couple even once talked about marriage. So did it happen? Is Bonnie in marital bliss? To know more about Bonnie’s relationship history and boyfriends read down below.

Bonnie Wright Marital and Her Boyfriend in 2021

Bonnie Wright is yet to be married and has remained tight-lipped about her love life and relationship. Moreover, sources report that the actress is not dating anyone, neither does have a boyfriend as of 2021.

Prior to her current status, Bonnie Wright had terrific chemistry with fellow actor Jamie Campbell Bower. The couple got engaged in April 2011 after a year of a whirlwind romance.

While talking about their engagement, Bower maintained at the time, “I am engaged. I’m very happy. It’s a wonderful, wonderful time.”

What’s more, the duo even had decided about starting a conjugal life. He mentioned in the same interview, “We are [planning], but I won’t say when and I won’t say where. Or how.”

How Did Bonnie and Bower First Meet?

Bonnie first came across her then future-boyfriend Jamie Campbell at a party back in 2009. In addition, they also featured in Harry Potter and the Deathly Hallows – Part 1 (2010) together.

They Attended A Series Of Functions Together

Throughout their love affair, Bonnie and her beau Jamie attended several high-profile functions together.

The two made a red carpet appearance at The Orange British Academy Film Awards 2012 at The Royal Opera House on 12, 2012 in London.

On 27th April 2012, the Harry Potter stars went out for a walk with their pal in West London. Additionally, the two appeared together at the BFI London Film Festival, on October 12 of the same year, in London.

Their chemistry was going pretty well before the disaster struck in.

They Called Off Their Engagement

Bonnie and Jamie Campbell separated after a year of their engagement on 30th June 2012. A source close to the couple told People,

“They split a while ago and it was amicable. Things had not been good with them for a really long time.”

Both of them were pretty upset about how things turned out. Jamie even revealed he was ‘heartbroken’ after Bonnie left the London townhouse which the two shared, prior to calling off their engagement.

Meanwhile, Campbell later began dating his ‘The Mortal Instruments’ co-star Lily Collins. Nevertheless, Jamie split with Lilly as well. As of now, the actor is in a romantic relationship with a tattoo artist, Ruby Quilter.

Shortly after her break up with Jamie, Bonnie moved on with a new boyfriend Simon Hammerstein, a London club owner. The two began dating in Sep 2012.

The two, however, parted ways after dating for just two months in November 2012. Still, an article published by Bustle on 16th Jan 2016, claimed they were still together.

Other than that, nothing was heard about their romance as it soon faded from the media.

Bonnie Wright once went out with singer Jacob Artist

Upon breaking things with Simon, the environment activist was later romantically linked to Jacob Artist, a singer, and dancer. According to Ranker, they began a love affair in Jan 2013.

Besides, the former couple also acted together in the movie After The Dark (2013), probably the project in which they met for the first time. In Feb 2013, they attended Elton John‘s AIDS Foundation Oscar Viewing Party.

Regardless, their relationship did not last long and they split up in May 2014.

All about Bonnie Wright: Her Parents, Net Worth, Siblings, Age, Height