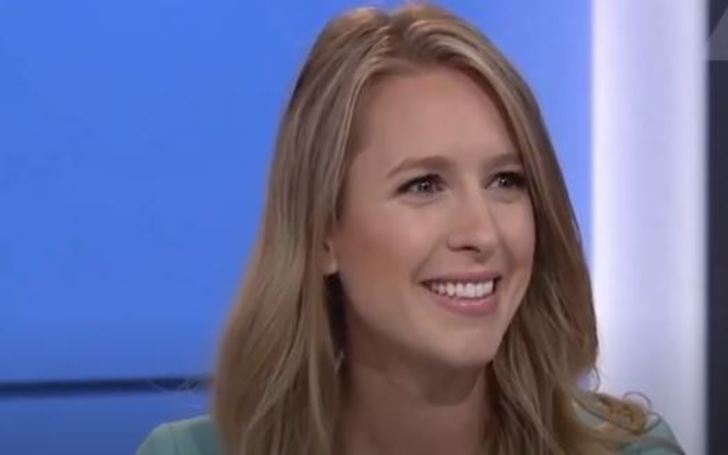 Hillary Vaughn is a business reporter for FOX news. She is known for Mornings with Maria Bartiromo (2014), The Claman Countdown (2008), and America Reports (2021). To some Vaughn might ring the bell for being the wife of Peter Doocy, the White House Correspondent for FOX.

Her husband, Doocy makes headlines with the questions he asks politicians and with his talks with the press secretary. Vaughn’s in-laws, the Doocys need no introductions; from her father-in-law to her husband as some of the network famous names.

But is there more to it regarding Doocy’s daughter-in-law? Is Hillary all just about reporting finances and money? Get the answers to all these in the content below.

Has Hillary Vaughn Revealed Her Family Yet?

Vaughn is yet to discuss her hereditary details. As such little to none has been unraveled about her parents or her upbringing.

Besides being a Fox business correspondent, Vaughn has hardly revealed her personal affairs; in fact, she debuted herself on Instagram only after her wedding to Peter Doocy.

Whether it’s the indifference of the media or the secrecy that Hillary has created around herself, for the general people, the business reporter has perhaps a side other than a Fox employee.

She though has been known to celebrate her birthday on June 10.

Some News That Hillary Vaughn Has Narrated

Vaughn initially was a member of the second class of the FOX News’ Junior Reporter Program. During those time,  she moved to Manchester, N.H to gain experience in on-the-ground reporting training. Vaughn officially became a reporter in the field in 2016 and has since cruised across the country for live reporting on major events such as President George H.W. Bush’s funeral services, political events, and more.

Hillary joined FOX Business Network in 2016. She currently serves as one of its correspondents based in Washington, D.C.

During the 2020 presidential election cycle, Vaughn traveled throughout the country to key voting states where she covered the issues that mattered to voters in each region.

FOX News Rundown’s “American Dream Series,” featured her on the ground reporting in Des Moines, Iowa ahead of the 2020 Iowa Caucuses. It aired on the FOX News Audio platform.

In addition to Fox News, the journalist has worked for Yahoo Finance, FOX 32 in Chicago, Fox 13 in Tampa, Fox 2 in Detroit, and Fox 5 in Washington DC among other outlets.

Other sectors where Vaughn has worked include KTBC-TV in Austin, Texas, and in locations like Chicago, California, Pennsylvania, and Washington, DC.

Fox has something called the Ailes Junior Reporter Program that aims to cultivate candidates and give them the necessary skills to make a career in broadcast journalism. It was the president of Fox News Channel and chairman of the Fox Television Stations Group that developed the Ailes.

The internship is quite exclusive in that every two years, out of 500 candidates, only 20 make it to the interviews. And later it narrows down to only five who get to receive advice and assessments about their appearance, diction, voice, writing, story pitching, and story-telling. In addition to learning how to establish field shots and edit.

It’s a two-year program and Vaughn was able to make it along with other prospects who have since been able to make a name for themselves. The remaining four were Aalia Shaheed, Matt Finn, Lauren Blanchard, and Kyle Rothenberg.

Vaughn is the wife of Peter Doocy. The White House correspondent husband of Hillary is also known sometimes as the son of Steve Doocy, the co-host of Fox & Friends. Vaughn and Doocy married in a small private ceremony on 26 April 2021 in Palm Meadow Bluff Resort, Bluffton, South Carolina.

Vaughn’s father-in-law, Steve Doocy shared photos of his son’s wedding on Fox & Friends the morning of April 26, 2021. As a matter of fact, Steve served as his son’s best man. For the speech, the father of the groom delivered a poem he’d composed for the occasion — a Doocy family tradition, and also the practice of poking fun at Democrats.

Apparently, the wedding only had 18 people in attendance. Also, rumor has it the couple had originally set the nuptials date in January of 2021. But things changed due to pandemic 2020.

While it is unclear when and where Vaughn met Steve’s son, Doocey though first Instagram-ly shared the picture of him and Hillary back in March 2017 watching a Villanova March Madness game.

Hillary’s partner, Doocy began his career at Fox News as a general assignment reporter in 2009.

The reporter husband of Vaughn has covered several stories including former Vice President Dick Cheney’s heart transplant surgery in March 2012, the flood in the Midwest in 2011, and Hurricane Sandy in New York City. Further, he was also the mediator for the 2008 and 2012 presidential elections.

Over the years, Doocy’s coverage has also included the Sandy Hook Elementary School shooting and the Boston Marathon bombing. Additionally, he was the first reporter to interview Robert O’Neill. The Navy SEAL, who reportedly fired the shots that killed terrorist leader Osama bin Laden.