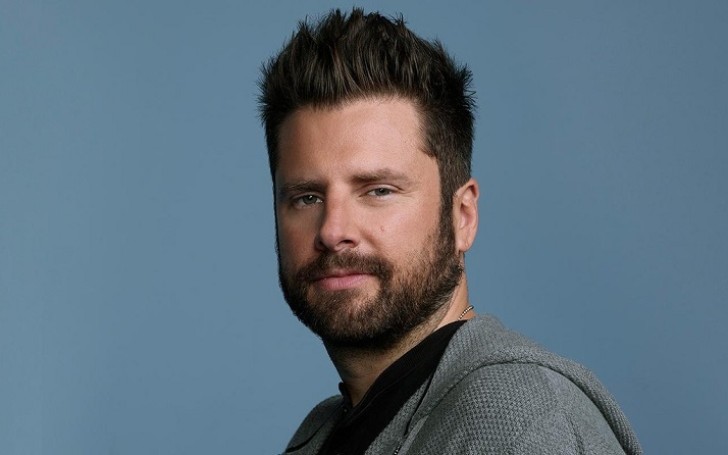 One of the distinguished actors James Roday became the international star after winning tremendous popularity with his acclaimed role Shawn Spencer in smash-hit Psych.

Besides, James made headlines after the actor started dating his Psych co-star and his reel-wife Maggie Lawson.

But is Roday married in real life? Let’s explore every detail of his personal life from his breakup with Lawson to his current relationship status.

Is James Roday Married? Who is His Wife?

James Roday is yet to be married. But, talking about his on-screen romance, Roday played the husband of his ex-gf and onscreen wife Maggie Lawson in the television film Psych: The Movie (2017).

Roday played Shawn Spencer in the project while his TV spouse portrayed Juliet “Jules” O’Hara. They were previously also in a serious relationship for several years outside the camera.

When Did Roday and Lawson Start Dating? They Met on ‘Psych’

The couple started dating back in 2006. James acquainted his then future-girlfriend, Maggie, on the set of highly acclaimed TV series Psych. The series premiered on 7th July 2006 on Friday.

They both appeared until the show ended after its eight seasons in March 2014. Along with the show’s valediction, their terrific romance inside and outside of the camera also came to an end.

Why Did James Roday and Maggie Lawson Break Up?

The celebrity couple called it quit after seven-year of their love affair in 2013. However, they never revealed how their years-long romance ended at such a never anticipated time.

But, sources say they are still very close friends.

They Also Shared a House in Los Angeles

Before their split, James and his partner Maggie were in a live-in-relationship for some time. They used to reside in Lawson’s home located in Los Angeles.

They both are animal lovers. Sadly, one of their loving and favorite dogs named Spaceman passed away back in October 2018. James announced they lost their pooch via Insta with a lengthy emotional message on 3rd Jan 2019.

Good evening. It's taken me awhile to feel okay about sharing this. Grief is a mysterious fig and denial is certainly one of its stages. Back in October, @magslawslawson and I said goodbye to our incomparably eccentric and beautiful Franc. Our trajectories have changed dramatically over the last decade but the one constant in all of that was our very special space walrus. Equal parts stubborn and intuitive, Franc was able to prop us up when we needed it most and keep us grounded when everything else felt up in the air. It always seemed like he knew something we didn't and, in his final week here on this planet, was clearly aware that his earthly tour was coming to an end. He waited until we could all be together and said his farewells, confident that he was leaving us both better than he found us. Of course he was right. For my part, I cannot remember a life or a car without him. He was an anchor, a co-pilot and a source of unconditional love and acceptance that allowed me to flourish and consistently choose roads less traveled without ever once feeling alone. I know he will be with us forever and his contributions will live on as long as we’re around to personify and pay them forward. Many of you showed him a great deal of reverence over the years. You remembered his birthdays. You liked all his photos. You worried about his toenails and championed his jowls. He knew it. We felt it. Love your pets. Appreciate them every day. As we emBARK on a new year, let us take a moment to say goodbye to those we lost in 2018. We will be teaming up with @roadogs to set up a rescue fund in his honor. Please enjoy these moments of a life that meant the world to us. Thank you Angel Jude and Brother Hugh. ❤️🐾

The two have posted a number of photos of their puppy on social media. Lawson is also a co-founder of the animal rescue organization, Tiger Frances Foundation.

Are James Roday and Maggie Lawson Back Together?

It is really quite difficult to confirm whether the two got back together. When James scored the role in A Million Little Things, Lawson congratulated her ex-bae on Twitter which confused many if they were back together.

One of their fans also commented on the post “you guys get back together.” Well, even after they broke up, they played husband and wife in Psych: The Movie (2017).

Although the two seem to have gotten together, they are yet to confirm their reconciliation.

Maggie Lawson after split with James began dating Back in the Game co-star Ben Koldyke. The couple got engaged on 14th November 2014 and married on 8th August 2015. The two tied the knot on Ben’s family ranch nestled in Las Vegas, New Mexico.

However, their matrimonial relationship could not last long and Maggie filed for divorce from her husband Koldyke in early 2017, after barely two-year of romance.