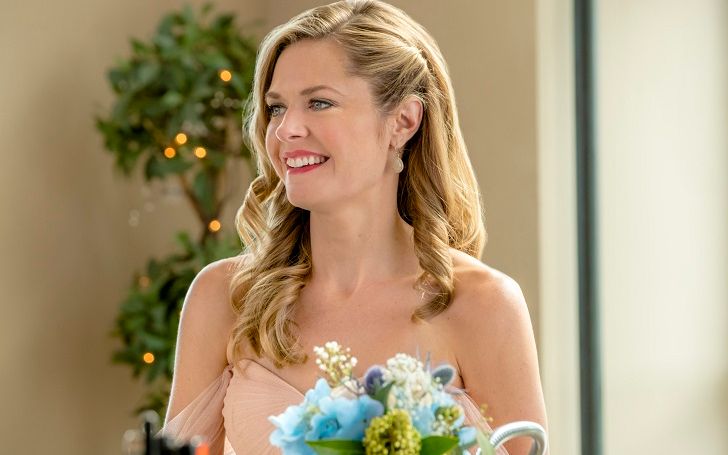 Today, we are going to trace out if the actress is dating anyone after her separation from Ben? Let’s also know how Maggie’s years-long relationship with Roday ended?

Maggie Lawson tied the knot with her fiance-turned-husband Ben Koldyke on 8th August 2015. The couple organized their wedding ceremony at the groom’s family ranch located in Las Vegas, New Mexico.

The Couple Met on the Set of ‘Back in the Game’

Lawson first met Koldyke on the set of the TV series Back in the Game. She played the lead role of Terry Gannon, a single mom on the project (2012-13) and Ben played Dick Slingbaugh in 2013.

The couple got engaged after several months of dating on November 14, 2014.

Why did Lawson and Koldyke Separated?

Lawson and Koldyke separated after over one and a half years of marriage in early 2017. Maggie reportedly filed for divorce from her husband Koldyke.

However, the couple never disclosed the reason behind their split.

Maggie Lawson & James Roday Dated for a While

Maggie Lawson isn’t dating anyone in 2021, but she has been romantically involved with a few hunks in the past.

How Did They First Come Across?

Maggie Lawson and James Roday first met when they both joined the USA Network TV series Psych in 2006. The two subsequently started dating.

Roday played hyper-observant consultant detective Shwan Spencer on the show and Lawson played Detective Juliet “Jules” O’Hara and the love interest of Shawn on the project.

They enjoyed their romance inside and outside of the reel until a year before the show ended in March 2014. However, the reason behind the end of their relationship is yet to be identified.

They Were in a Live-In-Relationship For Some Time

Are Roday and Lawson Back Together?

Following their amicable separation, the celebrity couple still remains close friends. They also played husband and wife in Psych: The Movie (2017). Their reunition on-screen and frequent social media posts led several of their fans to believe if they are back together.

Nonetheless, the two have yet to speak on the matter.

Maggie Lawson was also in a relationship with Eric Christian Olsen for a couple of years. As per sources, the then lovebirds started dating back in April 2003. The couple attended several major functions until they broke up in 2005.

On June 11th, 2003, Maggie and her then-boyfriend Eric attended the premiere of Dumb and Dumberer: When Harry Met Lloyd together at the Loews Universal City.