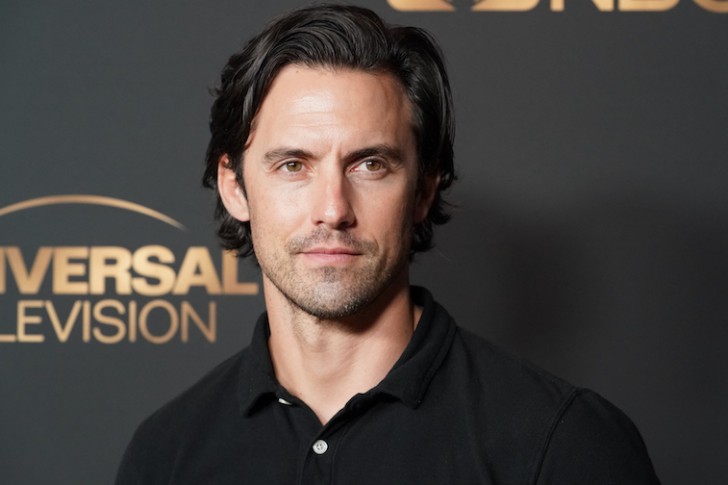 One of the prominent figures of the Film and TV industry, Milo Ventimiglia came to the limelight after his portrayal of Jess Mariano on the hit TV series Gilmore Girls. The actor previously played a heartthrob husband Jack Pearson on NBC’s This Is Us.

But apart from his amazing career in the industry, Ventimiglia also attracted huge media attention for his many high-profile relationships with his co-stars.

Back in 2019, Milo, 43, made headlines after paparazzi photographed him having dinner with his then-rumored girlfriend Diane Guerrero. Previously, the actor was also linked to many other prominent celebs.

Today, let us try to find out if the actor married? If yes who is his wife? Take a closer look at all the details about his wife, girlfriend, and more.

Who is Milo Ventimiglia Wife? Is The Actor Married in Real Life?

Ventimiglia never married in real life. However, Ventimiglia’s on-screen romance with his former TV spouse Rebecca Pearson (played by Mandy Moore) on the NBC family comedy This Is Us made many of his fans wonder to know whether the two are likewise special outside the camera.

Nevertheless, both of them are just good friends behind the scenes. In fact, Mandy is in a happy relationship with her husband Taylor Goldsmith. The two tied the knot in November 2018, in Los Angeles.

Besides, the on-screen duo has three children Kate, Kevin, and Randall. In the series, Rebecca, later on, exchanged the vows with someone else after the death of her then-hubby, Jack.

Although 0Ventimiglia is yet to marry, the actor has had numerous affairs in the past!

Who is Milo Ventimiglia’s Girlfriend?

This Is Us star Milo Ventimiglia is yet to introduce anyone as his girlfriend as of 2021. The actor has understandably remained tight-lipped about his dating life after involving in multiple relationships with co-stars.

In October 2019, Ventimiglia reportedly dated Diane Guerrero, an actress. She is famous for her role in Orange Is the New Black.

Their dating rumors sparked when Milo and Diane were spotted having dinner at Mexican restaurant Escuela Taqueria, in Los Angeles. The two also went on to take an ice cream at The Milk Shop. But according to the People, they’re just close friends.

Milo Ventimiglia was in a relationship with Kelly Egarian, a marketing coordinator who currently works for fashion designer Stella McCartney.

Sources reported that the couple was first seen together in Dec 2016. The two kept their relationship quite a secret until they made their first appearance. They attended the 2017 Emmy Awards ceremony in Los Angeles in Sep 2016.

Ventimiglia and Egarian never walked the red carpet together. Still, their frequent appearance at the ceremony and post-ceremony dinner made it quite clear that they were a loving couple once.

Nonetheless, their relationship could not last long and they reportedly broke up in early 2018.

In March of the year, Ventimiglia was photographed, enjoying with an unknown woman in Disneyland, California. But, he never talked about the mysterious woman. Seems like it was just a random hook-up for the hunk.

Milo Ventimiglia Relationship With Alexis Bledel: They Were Once Ready to Marry

Throughout the 2000s, Milo Ventimiglia’s high-profile relationship with one of his co-star widely circulated in the media. Ventimiglia portrayed Jack Pearson, a bad boy love interest for Rory Gilmore played by Alexis Bledel in Gilmore Girls. Despite their short-lived on-screen romance, the two dated for years in real life.

Milo met his then future-girlfriend, Alexis, after she joined the cast of the show in late 2001. They officially started dating in Dec 2002.

The former celebrity couple also attended several functions together and looked pretty much into each other. In September 2005, Alexis told People they even talked about walking down the aisle.

I think everybody who has been dating for more than a couple of years probably talks about it at some point. It’s a fun thing for us to talk about, but that’s it.

Nonetheless, the two broke up in June 2006 after a four-year of their relationship without citing any proper reason behind the split.

Milo Ventimiglia later went on to link to his Heroes co-star Hayden Panettiere. The former couple was first acquainted on the set of the NBC Superhero series Heroes in 2006.

Ventimiglia played the lead role of Peter Petrelli, a paramedic while Panettiere appeared as Claire Bennet, a cheerleader on the series.

Online sources reported Milo and his girlfriend Hayden started dating in December 2007. Their relationship lasted for a couple of years and they split in Feb 2009. The same year, Panettiere moved on with retired Ukrainian boxer, Wladimir Klitschko.

But, as of 2021, Milo Ventimiglia isn’t dating anyone publically.