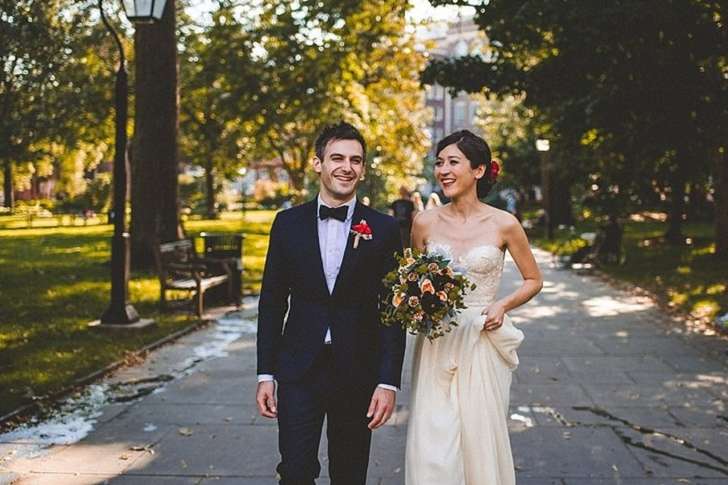 The veteran sports personality, Mina Kimes currently serves as a senior writer for ESPN. She is also an NFL analyst on NFL Live. Along with her successful professional life, Mina has maintained a beautiful relationship with her boyfriend-turned-husband, Nick Sylvester, for years now.

Well, here we are going to explore all about Mina and Nick’s love life. How long have they been married? Where did they first meet?

Is Mina Kimes Married? Beautiful Wedding with Her Husband Nick Sylvester in 2015

Some tabloids suggest Mina Kimes and her husband Nick Sylvester married in 2014, but the fact is Mina and Nick tied the knot on the 19th Sep 2015. A picture of their wedding card clearly states they exchanged vows in 2015 and not in 2014.

Besides, the couple organized their wedding ceremony in Philadelphia, Pennsylvania. For the nuptials, Mina wore a skin-colored off-shoulder gown with her hair pulled up in a bun. On the other hand, her groom looked dapper in a black Tuxedo. Their matrimonial ceremony was attended by many of their friends and family.

Journalist Kimes shared the first glimpse in the honor of their special day on 13th October, captioning the photo. “three weeks in, going strong”

The adorable couple has since been sharing a great love, supporting each other through thick and thin. Additionally, Mina’s Instagram is full of her family and puppies photos.

They often make visits to beautiful destinations all over the globe. In April 2016, they were spotted together in Nakameguro, Tokyo.

Mina and Her Spouse Nick Don’t Share the Same Interest

Well, it may come as a surprise for many but unlike Mina, who is quite into football, her partner isn’t really into it. Nevertheless, there’s one person in the Sylvester household who is an ardent football fan, Mina’s mother-in-law.

In an interview with The Philadelphia Inquirer, Mina stated,

“My husband went to St. Joe’s Prep, and they’re from Montgomeryville. He’s not a huge Eagles fan, but my mother-in-law is. She texts me all the time about the Eagles and how nervous she is. She wears her Wentz jersey everywhere.”

One would think how in the world did Mina end up marrying a guy who doesn’t even watch sports. Well, you know what they say, opposite attracts.

We all know love has no conditions. It is not necessary to fall in love with someone who shares the same interest but rather with the one with whom you’d like to spend your time.

Mina Kimes’ hubby Nick Sylvester is the songwriter and synthesist. He co-founded the music company called Godmode, based in Los Angeles. He is also the creator of BOUNCE, an app for musicians.

On the other side, Nick is an amateur plant enthusiast.

When did Mina Kimes and Nick Sylvester first meet?

Neither Kimes nor Sylvester never revealed how they met but, some sources reported they met through a mutual friend in the early 2010s.

Despite being a popular on-air personality, Mina is quite secretive about her love life, and the same case for her husband Nick Sylvester.

How Long have Nick Sylvester and Mina Kimes Been Together?

Mina and her spouse Nick both are active on Instagram. Nick with just a couple of posts while Mina has shared over 1400 posts on her Insta as of 2021. Their frequent social media posts also helped to trace out some secrets about their interesting love story.

Mina and Nick dated for several years before walking down the aisle. Scrolling down her Instagram account, it looks like the couple is together since 2012 as Kimes posted the first photo of her then future-spouse on 28th June 2012.

They are unstoppable since then and have shared a number of beautiful photos of themselves, flaunting their unconditional love. On 18th March 2013, Mina also posted a sweet tribute to her then-boyfriend on Insta in honor of their romantic holiday in Puerto Plata.

It looks like Mina and Nick will take their time before expanding their family. As of yet, there’s no saying whether the duo is expecting a child or not.

On the other hand, Mina is quite happy being an aunt as her brother, Isaac Kimes is a father of two kids, Holden and Quinn. And Mina is also fond of her nephew and niece.

Besides, her husband Nick has mentioned himself as a father of Lenny on his Instagram page. Well, someone who plays the role of father to pooch or any animal is really appreciated. Pretty sure, he’ll be a great father!

Nick and Mina are both puppy lovers. If you once visit Mina’s Instagram page you would definitely know the great attachment the media personality has to the dog.

Mina hosts a Podcast with Her Canine

Prior to hosting ESPN Daily, Mina also plays the same role in the NFL podcast, The Mina Kimes Show featuring Lenny. Kimes told People, the decision of giving her puppy a presence on the show is,

“I thought, ‘Well, I probably need a male co-host for people to listen”

So then I thought, ‘Well, how about I bring on a male co-host but he doesn’t get to talk and it’s my dog.’ So I love it

First things first, Mina and Katie Nolan belong to the same fraternity and are both ESPN‘s employees. On the other hand, they are both extroverts and loves going outdoor. Both of them are also fond of dogs. Mina has a puppy named Lenny and similarly, Katie is the owner of the dog, Myrtle.

In late 2019, Kimes appeared as a guest in Nolan’s ESPN series, “Always Late with Katie Nolan.” They featured in the video as a judge of the cutest dogs in sports.

Here is the full clip!