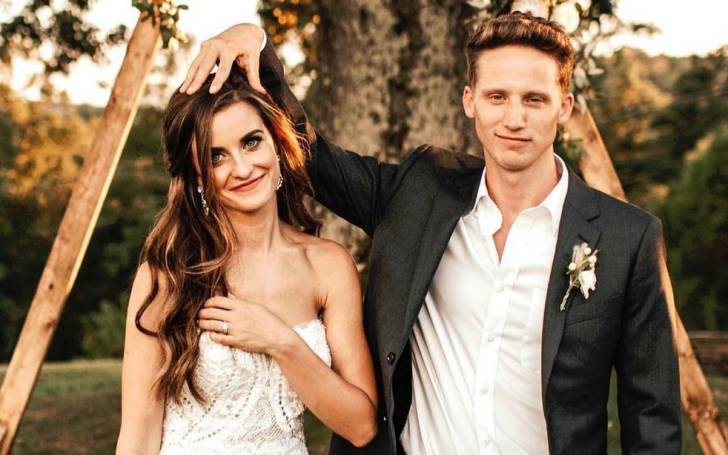 Rapper Nathan Feuerstein, famously known as NF, relishes a happy marital life. Just like himself, NF’s wife is also accomplished in her own profession. The two have been in a committed relationship for several years now.

Let’s know when NF tied the knot and where they got married. And let’s also find out if they have kids from their relationship.

Yes, the hit American rapper NF is in a happy conjugal relationship for a few years now. He married his girlfriend-turned-fiancee, Bridgette Feuerstein (nee Doremus).

They walked down the aisle in the presence of their friends and family on September 1, 2018. The couple decided to say ‘I do’s’ after dating for 5-years. They first met back in May 2015 at a party.

In addition, the beautiful nuptials took place in an exotic place. It wouldn’t be an understatement to say it was kinda like a destination wedding.

Judging by the location, it looked more like rural America wherein you don’t hear all the bustle as we used to in the town. Honestly, wedding in such locations, as opposed to some hall in Los Angeles is really breathtaking.

NF proposed to his girlfriend of five years in January of 2018. Later, his girlfriend and now fiancee announced they were engaged to her fans via Instagram.

In the post, she showed off her engagement ring and wrote,

She was literally head over heels after they got engaged and fans looked elated as well. And just a few months later, their unification came to be.

Who is NF Wife Bridgette Feuerstein? A Fitness Guru and an Entrepreneur

NF’s wife Bridgette Feuerstein (Doremus) is accomplished in her professional life just like her husband. She is a certified fitness guru and entrepreneur. Born in 1990 and at the moment, Nf’s spouse is 30-year-old.

For instance, she runs her own chain of clothing named Halfway Hippie. Moreover, she sells T-Shirts, Crewneck tops, Crop tops under the name Halfway Hippie.

Born and raised in Washington, Bridgette has always been into a healthy lifestyle. It is because of this she is a Pescatarian, meaning she doesn’t indulge in any meat except fish.

Bridgette always wanted to persuade people to give up on an unhealthy lifestyle and follow a healthy diet. That’s why she writes cookbooks. Many of her recipes are the same food she eats on a daily basis.

Most recently she shared how to cook Salmon Niçoise Salad.

You guys asked, so I put this easy salmon Niçoise salad recipe up on my blog! This is a great meal you can have for lunch or dinner, it’s gluten and dairy free PLUS it’s super quick and easy to make! Just check the link in my bio 👆🏼❤️

NF and Wife Bridgette’s Life After Their Marriage

For NF and his wife Bridgette, life after their wedding didn’t change really. For the most part, their relationship is the same as before, with added commitment.

Bridgette usually shares a lot of pictures with her hubby on her social media accounts. Every now and then, the couple would express their gratitude and love towards each other.

Likewise, the fitness guru also shares throwback snaps from their romantic getaway around the world. Be that as it may, they are enjoying blissful married life.

Speaking of which, many of the rapper’s fans are pondering over the fact if the pair share any children between them. To answer that plainly, it’s a definite no, however, they are on the verge of becoming a parent. Yes, the pair is expecting their first child together.

Although we’re yet to find out the gender of their first child, we are happy they are going to become a parent for the first time.

Rapper NF’s Wife Bridgette Doremus & Their Relationship: When & How Did They Meet?