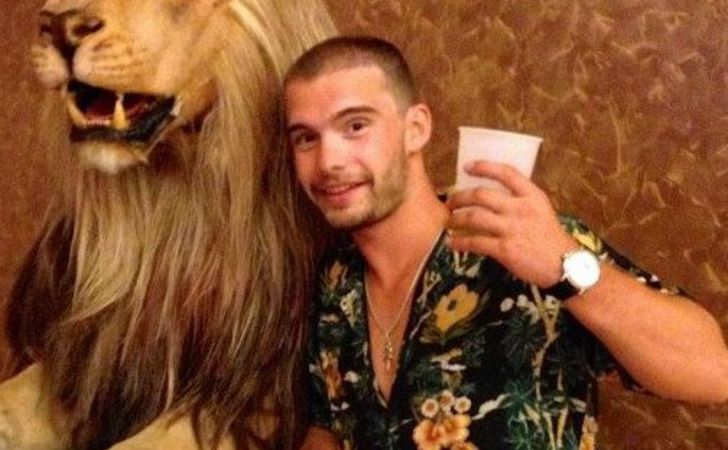 Taj Monroe Tallarico has a decent identity in the media, primarily because of his musician father. He is the son of Aerosmith’s singer Steven Tyler. Like her father, Taj is also into the music industry as a producer and songwriter. Besides, the star kid is also an actor.

Moreover, Taj is a big travel freak and is often seen traveling out with his friends. In fact, his social media is filled with photos from different travel destinations.

But what about his personal life. Is Taj Monroe Tallarico married? How is his relationship with his parents? Here are some interesting details about his career, siblings, girlfriend, and a lot more.

As we mentioned above, Taj is the son of famous American singer Steven Tyler and his mother Teresa Barrick. He was born on January 31, 1991, in Boston, MA. His age is 31 as of 2022.

A few sources claim that Taj spent a major part of his childhood in Boston, Massachusetts. Despite being born in a family with huge media exposure, Tallarico prefers life away from the limelight.

He Has Three Siblings: All Are Into Performing Arts

The 31 years old Taj has three siblings. His eldest sister Mia Abagale Tallarico is 42 years old and was born on December 22, 1978. She is an actor, plus-size model, author, visual artist, and a media personality as well. She has appeared in movies like Rush Hour 3, the VH1 reality shows Celebrity Fit Club.

Similarly, his other sister Liv Rundgren Tyler is also an American actress, producer, singer, and former model. Born on July 1, 1977, Liv is most famous for her works in 9-1-1: Lone Star, Harlots, The Leftovers, and Gunpowder.

The youngest among the sisters Chelsea Tyler was born on March 6, 1989. She is a singer and is married to American actor Jon Foster. She recently welcomed her child Vincent Frank with her husband.

Taj’s Parents Divorce When He Was Still Young

Taj’s father Steve is married twice and his mother Teresa Barrick is his second wife. They got married in 1988 however, they could not sustain their marriage for long. His parents finally divorce in 2006, almost after 17 years of the marital relationship.

Who is Taj Tallarico Mother?

His mother Teresa Barrick is a clothing and fashion designer. Over the years, the successful designer has worked for several popular clients including her now-ex-husband Steven and more. Besides, she once used to work at a restaurant.

Taj Monroe Tallarico Is Still Very Close To His Father

Like any kid, Monroe is very close to his father Steven. Be it celebrating Father’s day together or wishing him his birthday, Taj is always up there for his father.

Back on March 27, 2018, Steven posted a beautiful video clip of his children wishing him his birthday on his Instagram. Not only this, but Taj along with all his siblings celebrated their Father’s Day.

Like Taj, his father also has a special bonding with him. The singer posted a throwback photo of him with Taj from 1999. Undoubtedly, they looked adorable together.

Besides, he also loves watching his father perform on stage and has many photos from such events on his Facebook.

Career: Taj Monroe Tallarico Is An Actor And Music Producer

Like his father, Taj is also into music but is not a singer. He rather enjoys his job as a music producer. Though he is not very out and about his professional career in music, he has reportedly worked on some successful projects with singers.

Apart from music, Monroe has also worked in one of the episodes of Disney Channel’s hit show, Lizzie McGuire. The show that ran from 2001 to 2004, also starred Taj’s father, Steven Tyler as Santa Claus.

Taj is a big travel freak. Most of his posts on his Facebook are his pictures from some adventure tours or others. While Steven Tyler’s son is not active on social media lately, his posts in the early 2010s include clips from road trips, desert safari, late-night parties, and whatnot.

Well, it won’t be wrong to say, Taj is a fun-loving guy, who is all about exploring much in life.

Is Taj Monroe Tallarico Married? If Yes, Who is His Wife?

Taj is married and enjoying his life with his wife Brittany Tallarico. As per his Facebook page, the star kid married his girlfriend Tallarico on October 27, 2018, in a private wedding ceremony.

Though they married very recently, the two had been dating for years before they tied the knot. In fact, his now wife Brittany made a post together with Taj back in January 2016 which makes it pretty evident that they have been together for a long time.

However, Taj has not revealed how and when the star kid met his wife Brittany.

Who Is His Wife Brittany Tallarico?

Taj Monroe Tallarico’s wife Brittany Tallarico is a student of Business Management and did her graduation in 2016 from Bentley University – McCallum Graduate School of Business.

As of 2022, Tallarico works for Gilbane Building Company. With the company, she was also part of the construction project of Dearborn STEM Academy, Roxbury, MA.

As for a fact, Brittany also wished Taj’s father on his birthday in 2018.

Well, Taj is pretty balanced financially. He has an estimated worth around $1 million in 2022. On the other hand, his father Steven has a fortune of $150 million.