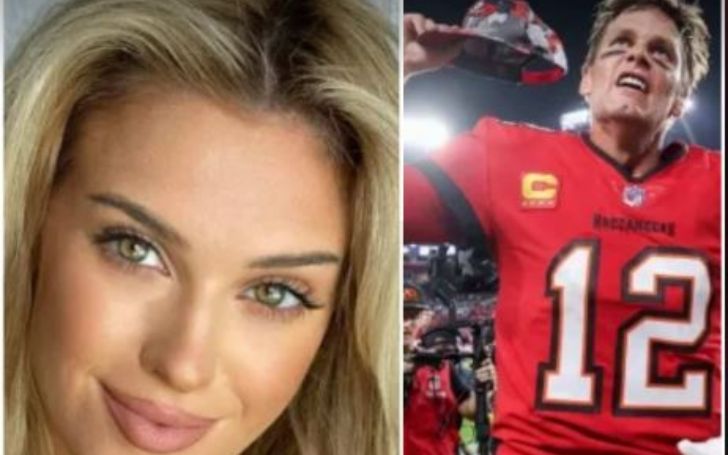 Veronika Rajek seems to be the new name who has made entry into the life of the NFL superstar, Tom Brady. Rajek is a Slovakian model and people have often dubbed her as a woman whose body is too dangerous for social media. The girl with whom Brady allegedly is in a relationship is a former Miss Slovakia competitor. Rajek has a huge online following with more than 3 million people subscribing to her Instagram.

Rajek already was on hot waters with people from cancel culture targeting her since the beginning. Now the magnitude of the attention towards her has only grown since her introduction to Brady’s life. Furthermore, the recent words from her Instagram which the model herself penned have spawned several headlines.

It looks like, this fling is just on the first page and merely a few or two words have been in the discussion albeit in quite a light manner. So what’s the real deal; keep scrolling to know the complete details.

The hearsay that Rajek is dating Tom got media-serious when Rajek turned heads by showing up at Brady’s Buccaneers game against New Orleans Saints on Dec 7, 2022.

Veronika later took to her social media to talk about the NFL star. In the caption along with a picture that includes Rajek in Brady’s no 12 shirts, the Vienna-based model wrote,

I saw the LEGEND and if somebody asks me again if I love Brady, yes I love him and show me somebody who doesn’t.

Even his haters love him because they know he is the [goat emoji]. Thank you for a fantastic show.

Tom Brady And Veronika May Not Have Met Yet

Despite all these, it is unclear if Brady and Rajek have met each other in person.  According to her representative, the only thing that the certified nonplastic model wants from Tom is that he wins his eighth ring.

Further, Brady also hasn’t said if he is active in the dating game since his divorce from Brazilian supermodel, Gisele Bundchen which took place in Oct 2022. Speaking of her, Brady’s ex-wife herself was spotted having a dinner date with Florida-based jiu-jitsu instructor, Joaquim Valente just some days after her official separation from the former New England Patriots.

Meanwhile, Brady, who returned from his retirement in March 2022, is currently playing for the Tampa Bay Buccaneers of the NFL.

Its A Weak Possibility That Rajek Could Be Dating Brady

The fact that strongly back this statement is Rajek is already a married woman. The East European model wed Slovakian bobsleigh competitor Viktor Rajek on June 2019. Veronika’s spouse, Viktor apparently competed in the 2006 Winter Olympics two-man and four-man events. As for now, Viktor mostly is a businessman who owns a restaurant Bier and Bierli in Vienna Austria. He graduated from the University of Akron in Ohio.

The possibility that Veronika could be dating Tom (despite the aforesaid information) presumably exists because it’s been quite a while since the model has uploaded any pictures of her husband, Viktor on any of her social media. This has given rise to the suspicion that Veronika could be a single woman, thus making her one of the prospects in the dating world.

Veronika Rajek Net Worth; How Rich Is The Slovakian Model?

Although the details regarding any hard number on Rajek’s net worth are yet to circle around, one can safely say she at the least lives a financially sound life considering the exotic holidays and glamorous lifestyle she flaunts on her Instagram.

Furthermore, it should be noted that she is also an ambassador for an international clothing line, Fashion Nova, which may also be contributing to her overall net worth. In fact, every now and then she does promotions for some of the most luxurious brands in the world. Some of them are Dolce and Gabbana, Blumarine, and Wang among others.

In light of the aforesaid details and her apparent way of living, some sources believe Rajek could have a net worth as high as $1 million.

The number however pales in comparison to her alleged NFL boyfriend, Tom Brady who has a whopping net worth of over $200 million. He currently pockets around $30 million in salary playing as a quarterback for the Tampa Bay Buccaneers.

A Bit About Tom Brady’s Relationships; Who Is His First Wife?

Brady in addition to a famous NFL career has also had a number of partners over the years. Before he enjoyed 13 years of marriage with his ex-wife, Gisele, Tom dated names like Bridget Moynahan, Tara Reid, Layla Roberts, and Meghan Vasconcellos, among others. Brady however would tie the knot only with Gisele Bundchen. So the first wife of Brady is the Brazilian American model. The couple married in 2009 and remained together until late 2022. When together, Brady and Bundchen welcomed two children, a son Benjamin and a daughter, Vivian.

The parents of two surprised the world when they announced their divorce in Oct 2022. While a clear-cut reason behind their divorce is still unknown, some people close to them have claimed it was Brady’s decision to refocus his time in football that made things worse. However, later another likewise source told the fallout of their relationship had nothing to do with football. It’s just that things got really complicated between them.

Brady also has one more son though it was from his relationship with one of his ex-partners, Moynahan.