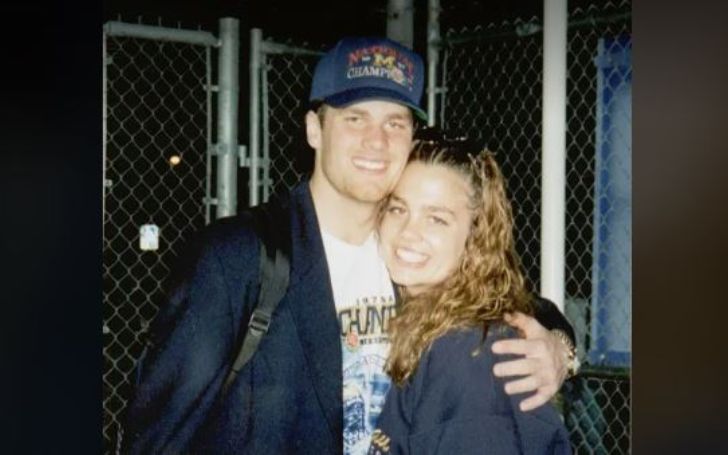 Nancy Brady is a public health technical advisor who specializes in Promoting and Improving Health and is better known as the elder sister of Tom Brady, the Tampa Bay Buccaneers quarterback and a seven-time Superbowl winner. The Lombardi Cup champion’s sister, Nancy has 20 years of health care experience working in the public and private sectors.

The celebrated sportsman, Tom Brady has three sisters – Nancy, Julie, and Maureen – all of whom had incredible sporting abilities during their high school and college period. So much so, at school, the ex-New England Patriots QB was always following in their footsteps.

Tom’s sisters, now, however, have become the ones who never seek out the media attention, including Nancy. At present, they all have a sort of low-key life professionally and personally. Read about Nancy’s likewise life in addition to her growing up with Tom, her career, her philanthropic doings, and more.

Nancy Brady Grew Up With Three Siblings Including Tom Brady

The now 46 years old Nancy is one of the four children of Tom Brady Sr and Galynn Patricia Brady. She is the youngest of her sisters but older than her brother, Tom. The rest of the sisters are Maureen Brady and Julie Brady.

Nancy’s eldest sister, Maureen is the oldest child and was a stand-out athlete and an All-American softball pitcher at Fresno State in the 1990s. She now, though, is a nurse and sports instructor who reportedly works at a local hospital in Bakersfield, California.

Nancy’s other sister, Julie, on the other hand, has tended to stay out of the spotlight for years. She is the wife of ex-Boston Red Sox player, Kevin Youkilis with whom she shares three children. The four siblings grew up in San Mateo, California.

Nancy Brady Is A Graduate Of Berkley; She Was A Collegiate Athlete

Nancy graduated from the University of California, Berkeley with a degree in BA, Social Work, Sociology (1994 – 1998). During her time at UC-Berkeley, she also majored in social welfare.

She additionally studied MPH, International Health at Boston University School of Public Health
Boston, Massachusetts (2010 – 2012). Much like her sister, Maureen, Nancy Brady during her college also starred in softball.

She likewise was at the top of her class in basketball. Nancy earned a scholarship to play softball at UC Berkley.

Growing up it was the three sisters, Nancy, Maureen, and Julie who were all pretty good in sports, always in the newspaper. Tommy, on the other hand, always used to be known as ‘Maureen Brady’s little brother’ or ‘The Little Brady’.

So, he one time wrote a paper, saying one day he wants his sisters to be known as Tom Brady’s sisters. Nancy’s elder sister Maureen once revealed their brother vowed to make a name for himself when he wrote a paper in ninth grade.

She told the New York Daily News: “Us girls, we were all pretty good in sports, always in the newspaper.” Tom apparently penned, ‘One day, I’m going to be a household name.’

What Does Nancy Brady Do?

Before JSI, Nancy worked with Pfizer, Inc. There she supported product introduction and scale. During that time the NFL superstar’s sister also became a Pfizer Global Health Fellow and worked in Uganda.

Nancy Brady has been traveling to Africa since 1998. She has made several trips to the continent with a handful of philanthropic organizations. It, however, was the Pfizer fellowship at the Infectious Disease Institute in Kampala, Uganda that sharpened her interest in global health.

Over the last decades or so, she has worked and volunteered at the Infectious Diseases Institute in Uganda. She has been a part of the institute’s communications and training departments.

The Infectious Disease Institute (IDI) started in 2004 with support from the Accordia Global Health Foundation. It is a Ugandan-run training and research center that seeks to expand the healthcare workforce. It focuses to scale up HIV, malaria, and tuberculosis prevention and treatment in Uganda and the region.

Nancy has spent over half a year in Uganda visiting the country several times.

Her Volunteering Works In Uganda

In late 2010, the footballer’s sister, Nancy went to Kampala, Uganda, for a six-month fellowship. She then would meet with doctors, nurses, and villagers battling global diseases such as HIV/AIDS, tuberculosis, and malaria. It was also the time when her brother suffered a knee injury during the 2008-9 football season.

The fellowship took her into villages, hospitals, and schools. Nancy later said it was an experience that raised her awareness. After visiting Uganda she knew the challenge of addressing disease is not just supplying medicines to remote areas, but ensuring there are trained healthcare providers to educate and care for the people who live there.

While in Uganda, Nancy also visited an elementary school in a remote village near Mpigi, called Tabiro. It was founded during the height of the HIV/AIDS epidemic.

Further, during her time in Uganda in the summer of 2012, Nancy went to the Kibaale district in the western part of the country. And as people were dying (including the doctor), she had to step up, take charge, and make decisions about how to treat the victims.

Again while in Uganda, during her time with The Infectious Disease Institute’s communications and training, she interviewed healthcare workers. They were trainers at the Institute who evaluated a mid-level HIV training program for nurses.

Ms. Brady got a chance to go to Uganda by applying to participate in Pfizer’s social responsibility program. It gives employees a chance to work for non-government agencies, or NGOs, serving at-risk communities.

Working In Africa Inspired Nancy Brady To Go Back To School

Nancy’s experience in Uganda later propelled her on two paths: She decided to enroll in the BU School of Public Health as an MPH candidate.

The Berkley graduate says spending time in the African nation made her do more charity work back in the US and also inspired her to go back to school.

Of her decision to go back to school to get an MPH, in an interview, Nancy said her passion for global health was always there, but she wanted more knowledge. Nancy claims she is always wanting to learn and grow and evolve. She further said earning an MPH was a long-time goal of hers.

And Boston University School of Public Health’s International Health program was a perfect fit for her interest in capacity-building. She found its focus on empowering communities to address their own health issues exciting.

While at Boston University, Nancy kept a low profile, juggling classwork, her job, and her family obligations. In Dec 2010, she expressed her aspirations of how she wants people to know her as her — not because of who her sibling is.

She believes the issues are so incredibly complex. The ex-Boston University student states so much of global health is capacity-building.

How Did Nancy Brady Get Into Humanitarian Activities?

Nancy says her willingness to work for the people comes from her family’s commitment to look beyond their inner circle and be engaged in the world. She also credits her family for the many opportunities she’s had.

Even before visiting Africa, Nancy used to spend her early career working with homeless and impoverished people in San Francisco. It, however, was during her time at Pfizer, that she grew an interest in social justice issues that led her to make several philanthropic visits to Africa.

After that, she went to countries including a trip to Ghana and Sierra Leone in 2010 with a women’s delegation organized by a Washington, DC, group. The sister of Patriots QB Tom Brady worked in Uganda during an ebola outbreak in the summer of 2012.

Nancy Also Raises Fundraisers; Her Brother Tom And His Wife Gisele Has Helped A Lot

Nancy Brady has also done several fundraisers. As such in the fall of 2010, she gave back to the Infectious Diseases Institute by throwing a fundraiser in Boston that netted a whopping $250,000. Also in Nov 2008, her brother, Tom through the One Laptop Per Child program sent computers to Nancy’s work in Uganda.

The BU graduate had visited Uganda alongside his sister, Nancy in 2007, on a trip organized by DATA, an African advocacy organization founded by U2’s Bono. Nancy and her brother worked together to get a shipment of laptops into Ugandan classrooms.

In Dec 2010, Nancy’s brother once again stepped up to help, when his sister hosted a pre-holiday fundraiser for Accordia Global Health Foundation at L’Espalier Restaurant in Boston. At the time, Tom and his wife, fashion model Gisele Bündchen, were among more than 150 attendees. They all helped to raise $250,000 for the foundation, as well as $22,000 for a computer trainer who assisted Tabiro with the laptops.

Nancy Brady said the event was a success not just in terms of fundraising, but also because it brought together people from different walks of life — athletes, academics, scientists, and activists. They all shared a desire to empower Africa in the fight against HIV/AIDS, malaria, and other infectious diseases.

The youngest of Tom’s three older sisters Nancy in Jan 2011 said she and her brother have always supported each other professionally and philanthropically.

Is Nancy Brady Married? Does She Have Kids?

The guest included Nancy’s brother, Tom, and his wife, Gisele Bundchen who put on a united front as they attended in Boston on Sunday, Oct. Also present were, Nancy’s niece and Tom-Gisele’s daughter, Vivian Lake, Benjamin, and Tom’s son from his previous marriage, John.

The reception took place at the posh Beacon Hill hotel XV Beacon at Mooo Restaurant. Nancy and her husband Steve had their first child in March 2021.

And it was the NFL star brother of hers who took to his Instagram Stories to wish his sister to announce the birth of her baby. On the other hand, though, not much about Nancy’s husband is known; when or how she met him.

Is Nancy Brady As Rich As Her Brother Tom; What Is Her Net Worth?

Building personal wealth might not be that much of a concern for Nancy since she seems more passionate about providing for others. Whatever the case though it is clear enough that the richest member of the Brady clan is none other than Tom himself with a net worth of over $240 million.

While Nancy and her sisters may have been the top athletes during their collegiate career, when it comes to pro league and big money, their brother, Tom is clearly an undisputed winner.

Nonetheless, Nancy’s net worth could still be in the domain of hundreds of thousands of dollars given that she once used to work for a multi-billion dollar pharmaceutical company, Pfizer.

Who Is Caleb Walker? Untold Facts About Paul Walker’s Brother