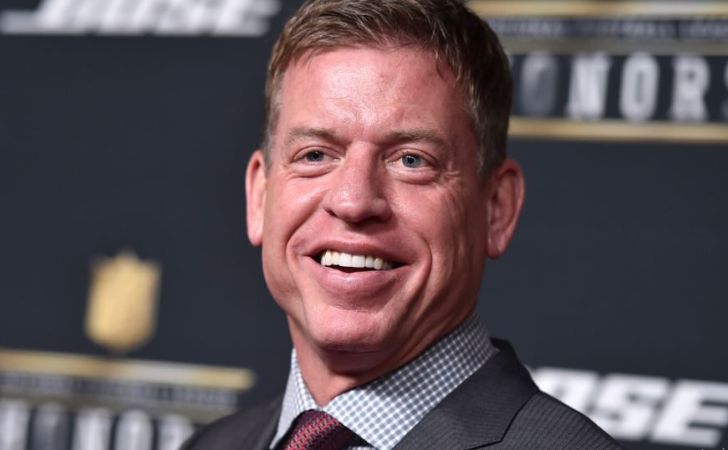 An American former professional football player Troy Aikman’s life has been under constant scrutiny, be it for his professional or personal life. Along with a successful NFL career spanning over a decade, he has also made a recognization for his multiple romantic relationships. Apart from multiple marriages and Troy Aikman’s wife, there have been a few of his other romances that were the talk of the town.

While Aikman is decently settled with his second wife Catherine Mooty at present, his romantic story is worth a share. Besides, he is also a father of two daughters with his first wife Rhonda Worthy.

Find out in detail about his kids, relationships he has had so far.

Though Troy had multiple relationships in the past, he seems to have settled down with his second wife Catherine Mooty.

The Hall of Fame Cowboys quarterback married the high-end fashion retailer Catherine “Capa” Mooty on September 1, 2017. The low-key wedding ceremony was held at the Biltmore Four Seasons in Montecito, California.

Post the nuptial that was followed by a reception, Aikman shared a beautiful post in wedding attire. “Ladies and gentlemen, Mr. & Mrs. Aikman”, he captioned the post

The couple is still together and is pretty happy in their marital relationship.

Dating and Engagement With Catherine

Troy and Mooty are finally married. But the beginning of their relationship is equally interesting. Though the exact date when Capa and Troy actually began dating is not known, they are supposedly been together since February 2016.

Well after dating for over a year, the 53 years old Aikman proposed Capa Mooty on July 2, 2017, during their European vacation in Lake Como, Italy.

Aikman even made a beautiful post on his Instagram mentioning July 2 as a special occasion. In the caption, he wrote, “June 2, 2017 – A special day as I proposed to the love of my life.”

They are undoubtedly a beautiful couple.

Capa Was Married in the Past

Prior to tying the knot with the former footballer, Mooty was married to Jerry Mooty, a lawyer by profession. Jerry is also recognized as the nephew of Cowboys’ owner Jerry Jones.

Although not much is known about his past relationship, she reportedly had two children, Val & Luke, with his ex-husband. While Val is a guitar player, Luke plays football.

Aikman’s now-wife Catherine leads a successful professional life at present. As a high-end fashion retailer, she owns a fashion brand named Luxeliner, with four other friends.

A mobile boutique, Luxiliner deals with clothes, accessories, and gift items. The brand was first launched in 2012 in Dallas after Aikman and one of his friends considered the project and bought a FedEx truck which they transformed into boutique-on-wheels.

As of 2020, Luxiliner has several branches across the United States and other countries as well.

On the other hand, Troy also currently works for Fox Sports alongside, American sportscaster Joe Buck. His life at present is pretty perfect professionally as well.

The former couple married in a private ceremony in Plano, Texas, on April 8, 2000. Coincidently, their wedding was held just before the final season of the NFL.

But unfortunately, after almost 11 years of marriage, they announced their separation on January 24, 2011. The divorce was finalized on April 12, 2011.

Talking about the decision to divorce, during an interview with Dallas Morning News, Aikman said,

This has been a difficult decision for Rhonda and me, but after 10 years of marriage we have decided to separate, We remain deeply committed to our children and respectfully ask that you honor our family s privacy during this period of adjustment.

He Had Two Kids With His First Wife Rhonda

Both his daughters are grownups and Jordan Ashley Aikman already plays high school lacrosse. They share a great bond with his footballer father.

Troy Aikman Dated Lorrie Morgan In the Past

Apart from his marriages, Troy has also had a famous affair in the past. Once regarded as the most eligible bachelor in Dallas by Texas Monthly, Aikman dated and American country music singer Lorrie Morgan.

In fact, the ‘What Part of No’ singer also made an appearance together with Troy at the ACM Awards back in May 1993. Though Aikman and Morgan’s relationship was the talk of the town back then, they eventually broke up. She is currently married to Randy White.

Likewise, back in the 90s when he was still in the Dallas Cowboys, he was also linked to American actress Sandra Bullock. However, they never confirmed their relationship and it did not get as much hype as his affair with ex-girlfriend Lorrie.