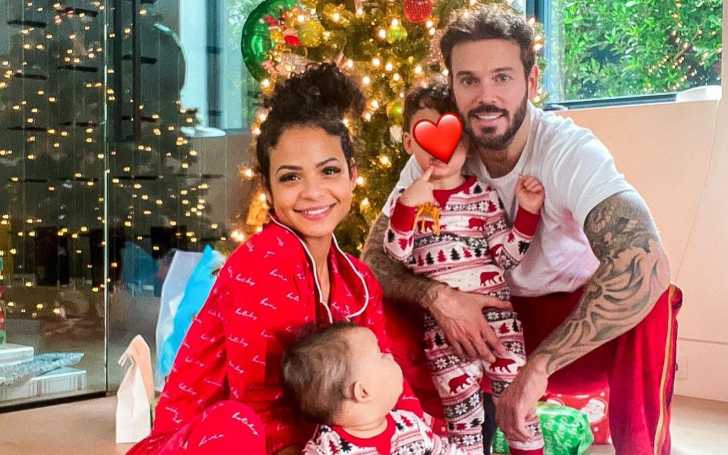 Isaiah Tota is famously known as the son of American singer and actress Christina Millian (aka Christina Marie Flores). His mom is a successful singer and songwriter who rose to fame as a lyricist and back vocalist for Jennifer Lopez‘s album J.Lo’s track Play. Further, Milian is also the founder of Beignet box.

Similarly, his father M.Pokora (aka Matthieu Tota) is also a well-known french singer. As a child of such well-established singers, many people are curious to know about him.

So, today, we have come up with some interesting details about this celebrity kid, Isaiah Tota. Here we go.

Isaiah Tota Was Born In 2020; He Is The Oldest Child Of His Parents

Isaiah Tota was born the oldest to his parents on January 2o, 2020 in Los Angeles, California the United States. The little lid, Tota celebrated his 2nd birthday in 2022 with so much joy with his parents. He will turn 3 years old in January, 2023.

Similarly, on his 2nd birth anniversary, his mom shared his birthday celebration video on her Instagram and wrote,

To my sweet son Isaiah who brings us so much joy every second every day. Happy 2nd birthday! I fell in love with you before I even met you. You live up to everything I’d wished for. I’m glad we could make this day a special one just for you! 💚

Now, soon in Jan 2023, the celebrity child is turning to be 3 years of age. Born with a silver spoon, the 2 years old kid is growing up in a luxurious lifestyle alongside his siblings.

Detail On His Family Background; What Is His Ethnicity?

Talking about Isaiah’s family background, his paternal grandparents are Andre Tota, a former professional footballer, and Brigitte. Similarly, he is the grandson of his maternal grandparents Don Flores and Carmen Milian. Further, Isaiah Tota’s aunt Danielle Flores is a well-known make-up artist.

Besides, with regard to ethnicity, Tota is of mixed race. He is Afro-Cuban American from his mother’s side whereas Polish French-American is from his father’s. He is an American citizen.

Isaiah Has Two Siblings; A Brother, And A Half-Sister

Isaiah has a younger brother Kenna Tota, born in April 2021. As of 2023, he is 1 year of age. Both siblings are growing up together with their parents Christina Milian and Matt Pokora.

Similarly, he has an older half-sister named Violet Madison Nash who is 12 years of age as of 2023. Violet is Isaiah’s sister from his mother Christina’s marriage with the American singer and songwriter The dream (aka Terius Youngdell Nash).

His Half-Sister Is Quite Popular On Social Media Handles

The 12-years old Tota’s half-sister Violet is a social media celebrity. At such a young age she has a verified account on both Twitter and Instagram. She is quite popular on Instagram with 210k followers.

Isaiah Tota’ Parents married The Same Year He Was Born; Their Love Life

Tota’s parents Christina Milian and Matt Pokora are reported to be a married couple. As per french magazine, the couple tied the knot on December 2020. However, the news about their marriage is yet to be confirmed as both the couple has not said anything regarding their marriage.

But, the fact is that Isaiah’s parents are together as a romantic partner since August 2017. On Aug 4, 2021, they together celebrated their 4th anniversary and on this occasion, by sharing a post, Christina wrote,

Happy 4 year anniversary to us! Nice to meet you all over again in the place we first set eyes on each other AND I we celebrated with my best best friends! I love summer ‘21! ❤️‍🔥

The couple keeps sharing each other on their respective social media account and is on great terms.

Tota’s Mother Was Married Before; Her Past Affairs

Before Isaiah’s parents came together, his mother, Christina was married once. She was married to the musician “The Dream.” They exchanged vows in September 2009. But unfortunately, the former couple separated within three months of their wedding. Their divorce was finalized on October 23, 2011.

Apart from her failed marriage, Milian has been in multiple affairs. After her separation from her ex-husband, she started dating the son of James Prince, James (“Jas”) Prince, Jr. The couple even shared a ring but later they called off their engagement. Further, she also had an affair with rapper Lil Wayne and actor Nick Cannon.

Both Isaiah’s Parents Are Successful Entertainers

In the field of music, Isaiah’s both mom and dad have gained massive success. Moving on to their career individually, his father Matthieu Tota, popularly known as Matt Pokora, is a French singer. He first started his musical career as a participant in the French talent reality show, Popstars. Later with his hit singles “Showbiz (The Battle),” “Elle me controle,” “Player,”  and “Dangerous,” Pokora succeeded to marked his name in French music.

Like his father, his mom is also a great entertainer in Hollywood. She is an accomplished singer with several hits AM to PM, When You Look at Me, It’s About Time, Dip It Low, and many others. Further, she is also an actress who acted in movies and series like Love Don’t Cost a Thing, Be Cool, Pulse, Christmas Cupid, and others. For her acting and singing skill, Milian also got nominations for Grammy awards two times.

As mentioned earlier, both of his parents have successful careers in the entertainment Industry. As a singer and an actor, they have earned a massive amount. His mom Christina has a net worth of $6 million while his dad Matt has a fortune of $8 million.