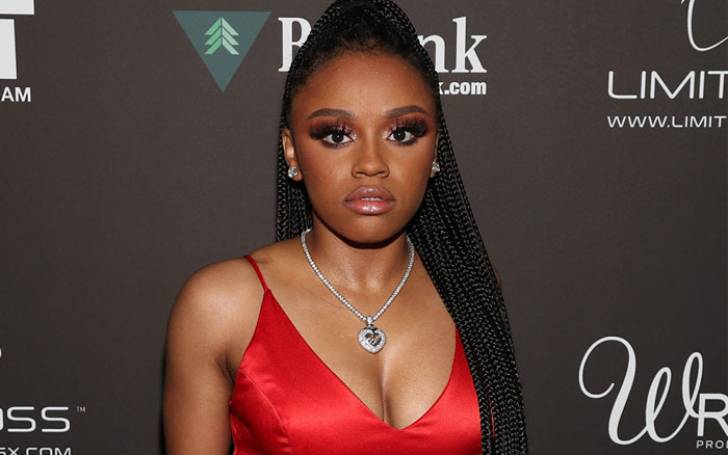 Iyanna Mayweather aka Yaya is the daughter of Floyd Mayweather. The legendary boxer shares Yaya with his ex-girlfriend Melissa Brim.

At first, Iyanna came to prominence as Floyd’s daughter, however, she became notorious after a stabbing incident. She reportedly stabbed her baby father’s ex-girlfriend.

Well, there are many interesting facts regarding Iyanna that many of you might be unaware of. In this article, we find details about her son, siblings, mom, and more. So without further ado, let’s get right into it.

Meet Iyanna Mayweather: Who is her mother?

She was born on May 20th, 2000, in Las Vegas, Nevada as the first and only child between Floyd ‘Money’ Mayweather and Melissa Brim.

Her mother is an entreprenuer who owns the boutique Devanna Love Boutique. She opened the boutique with the help of her now ex-boyfriend Floyd Mayweather.

On the other hand, her father Floyd Jr. is a world-famous boxer, who is famous for his undefeated boxing record.

Iyanna Mayweather excels in her studies

Well, Floyd certainly is a proud father as all of his kids are at least high school graduates. And Iyanna excels above all of her siblings.

As a happy father, Floyd showed his affection towards his daughter and talked in length about all the sacrifices he made on the way for his kids. He wrote,

The sacrifices we make for our loved ones are always blessings later on down the line. I dropped out in the 12th grade, with just a couple of credits left to go just to give my parents and siblings a better life. I encourage and preach to my children every day that education is extremely important because I want them to be better than me.

Well, Iyanna has certainly made her parents proud of her educational accomplishments, especially her dad.

How many siblings does Iyanna Mayweather have?

In total, Floyd is a father to four kids, whom he shares with two different girlfriends. Let’s talk about them one by one.

Iyanna is the oldest daughter of the Mayweather sibling. Floyd then started a brief relationship with Josie Harris, with whom he welcomed three kids, Koraun on November 17th, 1991, Zion Shamaree on March 28th, 2001, and Jirah Mayweather on June 25th, 2004.

Aside from them, she has one half-sibling named Devion Cromwell from her mother’s side. Her mom Melissa gave birth to Devion at the age of 16.

Her father threw an extravagant party on her 16th Birthday

Floyd isn’t called Money Mayweather for anything. After all, throughout his illustrious career, the man has generated $1.67 billion from his PPV buys. It’s only natural, his children will also get to enjoy all the riches.

When Iyanna turned sixteen, her father threw a birthday bash that she will remember for her lifetime. At the party, two of the biggest rappers of the current generation, Drake and Future performed exclusively.

While Drake rocked everyone with his energetic performance, Future also danced it off alongside DJ Esco.

By now, many of you might already know that Iyanna was once in a relationship with the up & coming rapper, NBA YoungBoy. Their rocky relationship started out in late 2018.

Despite their affection towards each other, their love story has been rocky from the beginning. One time in March 2019, Yaya reportedly slashed NBA’s car tires because of an argument.

Then in late 2019, YoungBoy released a rap album, by drawing inspiration from Michael Jackson’s ‘Dirty Diana,’ titled, ‘Dirty Iyanna.’ The rap song was a diss track aimed right at his on-and-off girlfriend.

Despite their tumultuous affair, the lovebirds share one child between them. Yaya gave birth to her first child and Floyd’s first grandson, Ketrell Gaulden Jr. on January 9th, 2021.

It was Floyd who first revealed that his daughter is expecting a child with her boyfriend of the time. They even had a great baby shower. Further, being a billionaire, Floyd gifted his first grandchild a $45k Rolex watch.

As if their relationship wasn’t unstable from the beginning, it took a drastic turn in 2020 when some stabbing was involved. In April of 2020, Yaya allegedly stabbed a woman named LaPattra Lashai Jacobs, one of Youngboy’s baby mama.

The incident happened in Houston, Texas. Iyanna had gone to her boyfriend’s house at around 1:30 am in April where she confronted LaPattra.

TMZ reported that Iyanna told Lashai that she was NBA’s fiance and that she leave the house immediately. Both of them had a tussle which eventually led to Yaya stabbing Lashai twice on her biceps.

After the incident unfolded, the Houston Police department arrested her. She was later bailed out by posting a $30,000 bond.

She was charged with aggravated assault with a deadly weapon. If the felony is proved, the convict either had to pay $10,000 or face up to 99-years in prison.

According to numerous outlets, Yaya may not be sentenced to prison considering her no criminal past. On the other hand, Yaya claims she did all that in the act of self-defense. According to her, LaPattra pulled her hair and ran into the kitchen which forced her to act in self-defense.

Who is Iyanna dating now?

Well, as of now, she doesn’t seem to be in a relationship. After all the incidents that unfolded from her previous relationship, it looks like she doesn’t want to be involved in any dating scene.

Iyanna Mayweather is a rapper

Although she is a star kid, Iyanna wants to carve out a name for herself without her dad’s shadow. Back in 2018, Iyanna started her rap career.

She released a rap song titled ‘Oh Okay’ under her alias, Money Yaya. So far the song has peaked at over two million viewers. Since then, however, Yaya is yet to share any new rap song.

On the other hand, she was also gaining traction from her social media account which had over one million followers at one point in time. She even partnered up with a few fashion brands, however, after the stabbing incident, she has since deleted her account.

How rich is Iyanna Mayweather? She lives a fairly lavish life

It’s only natural that she lives an incredible life. Her father Floyd is the richest boxer of all time with an exceptional net worth of $1.2 billion. His total fortune recently took a hike after his exhibition bout with Logan Paul.

From the above information alone, it is safe to say Iyanna has been raised in luxury.