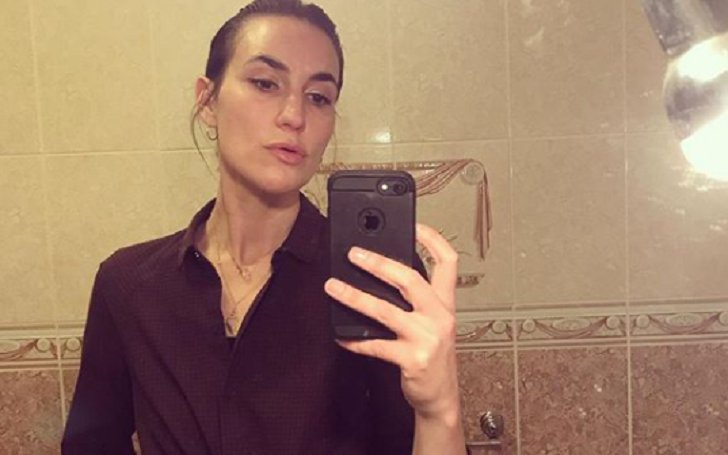 Honey Hollman (aka Honey Duffey) is an American actress famous for her role in Empire North. She is also famous as the daughter of the Oscar-winning star Jack Nicholson & Winnie Hollman. Her mother is a retired model from Denmark.

Besides, Honey previously embarked on the entertainment business. But, what is she doing now? Here are some unknown facts about her!

In the meantime, also know about Honey’s long-term marriage with her husband Peter & their adorable kids.

Where is Honey Hollman From? Her Nationality

Honey was born in 1981, in Copenhagen, Denmark. As of 2022, she is 41 years of age. She was raised by her single mother in Copenhagen. Nonetheless, the role of her father in her early days is a little bit unclear.

Talking about her education, Hollman graduated from Øregård Gymnasium, a high school in Hellerup.

She holds dual nationality Danish and American. Her ethnicity is Caucasian.

How Honey’s Parents Relationship Come to an End?

Honey Hollman’s father Jack and mother Winnie were in an on-and-off relationship for several years. They met in the 1970s. The couple always kept their romance out of the public eye and made a few public appearances throughout their love affair. In 1976, the former duo was spotted in Parish for the movie One Flew Over the Cuckoo’s Nest.

According to sources, they parted ways in the early 1980s.

Honey Relationship With Her Father

Following their split, the relationship between Honey and her dad also remains a mystery. She lived in Denmark with her mother while her dad resided in Los Angeles. But according to some sources, the two were on good terms although they had a huge physical distance between them. They often met each other on various occasions too.

Sources also reported that her dad helped her to start out a career in acting although Honey later chose another way to survive.

Honey Hollman Has Four Half-Siblings From Her Father’s Side

Hollman has an older half-sister Jennifer Nicholson from her father Jack’s previous marriage with Sandra Knight. They exchanged their vows in June 1962 and divorced after six-year of their marital relationship in 1968.

After their separation, the actor was romantically linked to the actress Susan Anspach. Holey’s other half-sibling, a brother Celeb Goddard came from their relationship.

Furthermore, Honey has two younger half-siblings, a brother Ray Nicholson and a sister Lorraine Nicholson from Nicholson’s affair with actress Rebecca Broussard. Ray and Lorraine both are involved in the entertainment world.

Besides, Hollman has a half-brother named Sonny Hollman from her mother’s other relationship. She shares a deep bond with Sonny and often shares pictures of her brother on social media handles.

Honey is also the aunt of three kids Harley, Anna, and Edith from Sonny’s relationship. Her mother Winnie frequently shares beautiful pictures of her six grandchildren on her Instagram.

Honey is a Former Actress: Now Runs a Grocery Store

Being the daughter of one of the Hollywood superstars Honey initially embarked on acting. She worked on a few on-screen projects. She landed her first acting role in Go’ after Danmark (2002) sharing the screen along with Jakob S. Boeskov, Mads Willie, and Adam Brix. After a prolonged acting gap, the sporadic entertainer again popped in the show business with a role in Empire North (2010).

However, Hollman later quit acting and made her transition into a different field. She is now the proud owner and founder of CULT: ZERO, an organic grocery store. She previously ran The High Horse, a pub with her hubby.

Who is Honey Hollman Husband?

Honey has been in a blissful marital relationship with her husband Peter Duffy for several years now. The two walked down the aisle at Knightsbrook Hotel Spa & Golf Resort. However, the couple has kept their wedding date private.

Taking more about Honey’s husband, Peter was born in Summerhill, Meath, Ireland. He was homeschooled and later went to Ballerup TEC to study Welding and Machining. He is the owner of  The High Horse which offers the finest in local and world beer and ciders.

Yes, the couple is blessed with three kids. Honey welcomed their first child, a son named Walter Duffy in April 2011. Their second child, a daughter Daisy Duffy was born in November 2012. Honey announced the big news via her Instagram three months after her birth in Jan 2013.

The two became parents for the third time after Hollman gave birth to their second son Hank Duffy in 2017. The family of five frequently goes out for beautiful vacations. In 2018, they were seen enjoying their time in Nerja, Spain.

The former actress has a fortune of $300,000 as of 2020. Besides, her father Jack has an estimated net worth of $400 million. He mainly makes money from his splendid career as an actor and filmmaker.

Who Is Her Father Jack Nicholson?

Born in Neptune City, Honey Hollman’s father Nicholson is the son of June Frances Nicholson, a showgirl. He attended Manasquan High School and later joined the military service. He was discharged at the end of his enlistment in 1962.

Talking about his acting career, Jack began his journey by appearing in an anthology series NBC Matinee Theater in 1956. He later became part of several TV projects that include The Barbara Stanwyck Show, The Andy Griffith Show, The Fight Game With Jim Lampley, and more.

Nicholson scored his first silver-screen role in The Cry Baby Killer in 1958. He worked on several big projects like Too Soon to Love, The Wild Ride, The Little Shop of Horrors, and Studs Lonigan in 1960.

Jack made his major breakthrough in the entertainment business after his iconic role in One Flew Over the Cuckoo’s Nest won him first Academy Award for Best Actor. He has also won two other Oscar Awards for his role in As Good as It Gets (1997) and  Terms of Endearment (1983).

In addition to acting, Jack has also worked as a filmmaker for several huge hit movies.

Honey has inked many tattoos on her body. She has one tat on her right forearm and two tats on her wrist.

Moreover, she has inscribed one tattoo on her left thigh.