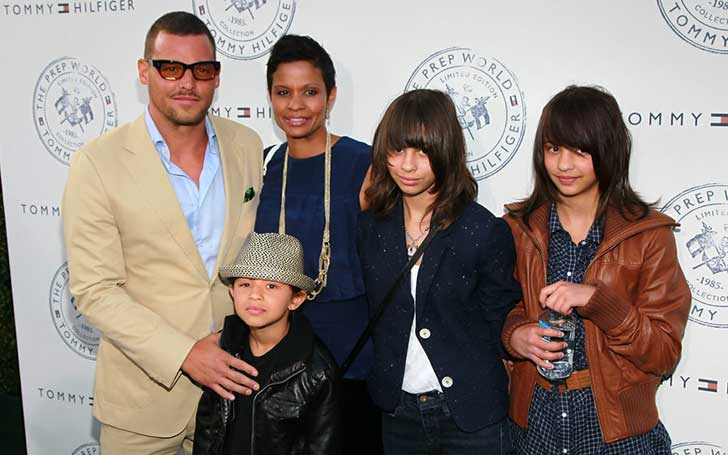 Probably you have been following Grey’s Anatomy star Justin Chambers for some time, then you might be aware of the fact that he is the father of five kids. The youngest of his five children is, Jackson Chambers. Besides Jackson, Justin and his wife of nearly three decades Keisha Chambers have four more children, all daughters.

Despite being a well-known celebrity, Justin prefers keeping his love life and relationships with his kids out of the media limelight. He does have social media handles, however, he doesn’t share photos on the platforms. Besides, Justin’s children don’t appear to be fans of social media as well. Due to this fact, details about Jackson Chambers are scarce as well.

So, here we have brought a detailed article covering every aspect of Jackson’s life. Read it through.

Chambers was born as the fifth child and the only son of actor Justin Chambers and his wife Keisha Chambers. When it comes to his birthday, Jackson was born on January 2, 2002, in New York, the United States of America. He is 23 years old as of 2023 and he is an American by nationality. As far as his ethnicity is concerned, he belongs to mixed ethnicity of White and African American.

His parents have been married since 1993. The pair met in the early 1990s when Justin was a model and was working for Calvin Klein and Jackson’s mother, Keisha was a modeling agency booker. The husband and wife of around 30 years started dating shortly after their meeting and soon, they took their relationship to the next level.

Is the Youngest of Five Siblings

Jackson is the fifth child of Justin and Keisha Chambers. He has four older sisters; Isabella Chambers, Maya, Kaila, and Eva. His oldest sister, Isabella is 28 years old as of 2023 (born December 16, 1994). Likewise, he has twin sisters, Maya and Kaila who were born on June 4, 1997. His fourth sister, Eva was born on 31st March 1999.

All of his sisters are grown up and are pursuing separate careers. As his oldest sister Isabella lives away from the media, her career endeavors are not known. On the other hand, Jackson’s sister Eva is pursuing a career in music. She is a bassist for the ladies’ band Pinky Pinky. The band released its debut album Turkey Dinner in 2019 June.

Meanwhile, one of his twin sisters, Kaila also seems to be pursuing a career in the entertainment industry. While she hasn’t shared much about her work, she has indeed directed a music video named “By the C” which premiered on YouTube on July 22. Kaila was the co-director of the music video alongside Anna Pollack.

Justin Chambers’s departure from the ABC television medical drama series, Grey’s Anatomy came as a shocker to many of his fans. Justin, who played Dr. Alex Larev since its first season in 2005 last appeared in its 350th episode, aired on November 14, 2019.

In the last episode, his character Dr. Alex left the hospital to take care of his sick mother.

Talking to Deadline, Justin said there was no good time to leave the show and character. He said, “For some time now, however, I have hoped to diversify my acting roles and career choices. And, as I turn 50 and am blessed with my remarkable, supportive wife and five wonderful children, now is that time.”

Chambers also thanked the ABC family, Shonda Rimes, his co-stars Chandra Wilson, Ellen Pompeo, and James Pickens, and the rest of the cast and crew including Kerri Higuchi, Justin Chambers, and more.

His Father Struggled with Sleeping Disorder

The 52-year-old Grey’s Anatomy star, Justin Chambers rarely shares his personal life problems in the media. One of those rare moments was in 2008 when he shared his sleeping disorder with People.

Back then, the actor told the outlet he went for a check-up at the UCLA Medical Center in LA after an extended sleep disorder. He added that it was a biological sleep disorder caused by his mental instability. Justin said his mind would feel tired and want to go to sleep, but it couldn’t.

Justin kept on saying that there was a time when he didn’t sleep more than one hour a week. Furthermore, he said he even went two months without sleep.

Jackson Chambers Had a Lavish Upbringing

Jackson’s father, Justin had summed up his modeling career and commenced his career in acting when he was born in 2002. Following his birth, Justin got some big acting jobs and in 2005, he landed the most promising role of his career, as Dr. Alex Karev in Grey’s Anatomy. Justin earned a good sum of money from his roles.

According to sources, during his last season on the show, he got a whopping $350k per episode. It would make a staggering $9 million per season. Besides, we can safely say Justin used to earn hundreds of thousands of dollars for his role in the ABC medical drama series in the early years too.

With all his earnings, Justin has a net worth of $18 million in 2023. With such decent earnings and net worth, we can say Justin and his wife Keisha gave everything their children need in their childhood days. They lived in New York for a very long time before they relocated to Los Angeles recently.