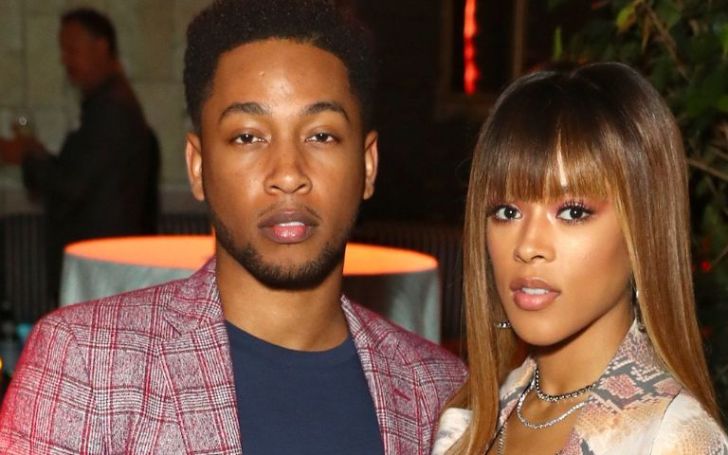 Jacob Latimore is an American actor and singer widely known for his appearance in the 2013 film Black Nativity. Well besides his professional accomplishments, he is also known for rumors about his relationships & Girlfriends.

In fact, recently there have been rumors that he is dating the Empire actress Serayah. The two also collaborated in a music video “Caught up” from the album Connection 2 in 2019.

So, what is the truth about their love affair? Further, we will also talk about all the relationships he has been in the past.

The Like A Boss actor Jacob is apparently dating the teen sensation Serayah McNeill. While the news might come as a surprise for you, but the duo has to some extent admitted their very low profile love affair.

The rumors about them began after the release of their music video “Caught up” in 2019. And the rumor soon proved to be true in one of Serayah’s recent interviews during the Cardi B’s Fashion Nova launch party.

Though the actress did not only claim that they were dating, she also gave strong evidence of the underlying romance in their relationship. Check out the video:

Check out the video here:

Besides, they have also been constantly appearing on their Instagram together ever since the “Caught up.”

Their Lip Syncing Instagram Is a Proof of Their romance

Jacob Latimore and his girlfriend Serayah have not only “confirmed their relationship” in interviews but have also pretty clearly hinted at in their Instagram post.

In their Instagram post in June 2019, they lip-synced to their song “Caught up” gazing infectiously to each other’s eyes.

The specificity of the line they chose to lip-sync is also pretty suggestive of their ongoing romance and which more of seemed like a confirmation of their love.

If I could pull you closer / Get my mind right / If you want me closer / Meet me on sight / Think that you know how to drive me crazy, That’s ’cause you my shawty, you my baby.

Serayah was There for Jacob

Besides all these, Serayah has also made multiple appearances together with her speculated boyfriend Jacob in public. In fact, Serayah was also there with Jacob on different occasions. In April of 2019, she was there with him during the premiere of Netflix’s Last Summer.

While Serayah is not in the cast of Last Summer, the two appear in the web series The Chi which is in its second season.

Who Is Jacob Latimore’s Girlfriend Serayah?

Talking about Serayah’s professional life, she is a successful actress, model, and singer. She is most popular for her portrayal of a singer Tiana Brown on the television show Empire.

Besides, he has also appeared in other films that include Lucky Girl, Burning Sands, where she played characters named Lisa Jackson & Angel respectively.

Moreover, as a singer, she has released songs like Driving Me, Lost & Found, and many others.

Apart from Serayah, Jacob has also had a few girlfriends in the past. As per sources, he previously dated American singer and songwriter Cymphonique Miller.

Similarly, there were also rumors of his linkup with his Candy Jar co-star Sami Gayle in 2018.

Jacob is not married as of 2020 but in a relationship with actress and singer Serayah McNeill.

Does Jacob Have Any Children?

Jacob does not have any children.

How old is Jacob Latimore?

Who Is Jacob Latimore? A Comprehensive Bio