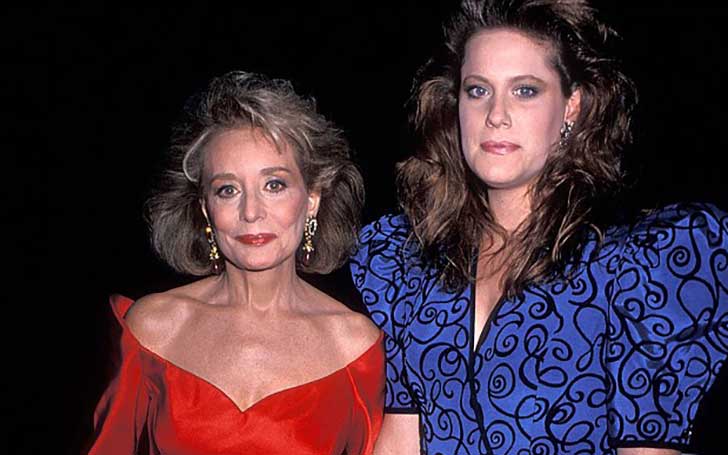 Jacqueline Dena Guber is the only daughter of renowned American retired journalist, Barbara Walters. Walters worked as a broadcast journalist, author, and television personality for over five decades. She is most famously known for her television programs such as Today, The View, and ABC Evening News among others.

Well, Jacqueline is the adopted daughter of the former journalist and her second husband Lee Guber. The former husband-and-wife decided to adopt after they went through a couple of painful miscarriages.

Being a daughter of a media figure, Jacqueline Dena Guber had a lavish upbringing, however, Guber didn’t enjoy being a celebrity kid much. She always loved being under the media radar, so there are many details to be unveiled about her. Let’s explore her life here.

Jacqueline was born in 1968 in the United States of America. Many online sources have reported her birthday as 14th June. Details about her biological parents are not available, however, we do know that Barbara and her husband Lee adopted her shortly after her birth in 1968. As a matter of fact, Barbara named her daughter after her sister.

Well, Jacqueline’s parents, mother Barbara Walters and father Lee Guber reached the decision to adopt a child after they suffered a couple of miscarriages.

During her appearance on Oprah’s Master Class in 2015, Barbara revealed that she had had three miscarriages with her then-husband Guber before she finally became a mother through adoption.

There she also gushed that double date with a couple they barely knew led them to adopt the baby girl. Walters told Oprah that the couple told them they had an opportunity to adopt a girl, however, they wanted to adopt a boy. Since they didn’t want to adopt the girl, Walters and her then-husband grabbed the opportunity.

Jacqueline’s mother, Barbara Walters has been married four times. For the first time, Walters tied the knot with Robert Henry Katz. He is a business executive and former Navy lieutenant. Married on June 20, 1955, in New York City, Walters and Katz divorced after less than two years.

Following that, Barbara married Lee Guber, a theatrical producer and theater owner. The ex-pair walked down the aisle on December 8, 1963. The couple remained married for over a decade before they parted ways in 1976. As mentioned earlier, Walters and Guber share one daughter.

Jacqueline’s mother’s third and fourth marriage was to the CEO of Lorimar Television, Merv Adelson. Their first marriage was in 1981, however, they divorced in 1984 due to some irreconcilable differences. The pair reunited shortly after their first divorce and again exchanged vows in 1986. Nevertheless, their second marriage didn’t last for long either. Barbara and Adelson divorced for the second time in 1992.

Barbara Walters doesn’t have children from her first and third husband. Meanwhile, during a conversation with CNN back in December 2013, Barbara revealed that she regretted not having more children. She added that she always wanted to have a bigger family. Here’s a clip.

When Jacqueline turned teen, she started skipping classes. As per NBC, she would sneak out in fishnet stockings and miniskirts to party at Manhattan’s famous Studio 54. Jackie told NBC that she would go home at four in the morning and then wouldn’t go to school.

Jackie added she would call in sick or pretend she was going to school. She continued,

“I always felt, you know, if we had, I don’t know, a housekeeper, that I could relate more to the housekeeper than I could the girls in my elite private school. And I think that that’s why I felt different.”

Then, the interviewer, Jane Pauley asked Barbara if she was unaware of her daughter’s behaviors. Barbara said: “I should have known, but I was much more innocent.”

When the interviewer said Barbara she was one of the most probing questioners in the world so why she didn’t do the same with her daughter. Then Barbara replied,

“You don’t do that with your own child. I can sit down and do an interview with somebody, and of course, I asked her questions. But I’m not going to ask 13-year-old the kinds of questions that you ask me.”

“You just don’t. This is your child. I would say to her, ‘How do you feel? Why are you sleeping? So you feel sick?’ I took her to a doctor. I was afraid she had a brain tumor.”

Jackie Ran Away During Her Late Teens

Jacqueline Dena Guber never wanted to be in the limelight, but living with her popular mother Barbara, it didn’t seem quite possible for the then-teen Jackie. Her mother Walters said Jackie had been “running headlong toward trouble for years before she actually ran away.”

Jacqueline said she used to smoke marijuana. “It was called crank then, but it’s now methamphetamines. Quaaludes were all over the place” said Jackie. She added she got isolated from her mother’s world and she even thought running would solve all the problems.

According to NBC, Jacqueline hitchhiked 800 miles across the Southwest. Barbara said she had thought of calling the police, however, one friend of her said her not to go to the police and wait patiently. Jackie remained out of contact for one long month before Barbara finally received a call. A guy with whom Jackie hitchhiked called Walters and “then I knew where she was. Thank God.”

Jaqueline didn’t return back to New York City, instead, she went to Oregon where nobody knew she was the daughter of Barbara Walters. Later, she moved to Maine where she met her future husband Mark Danforth. Afterward, Jacqueline shortly ran a program in Northern Maine named “New Horizon” with a motive of rescuing troubled teenagers like she used to be.

Jacqueline Dena Guber’s father Lee Guber died of cancer when she was around 20. According to LA Times, Lee Guber died of brain cancer at the age of 67 on March 27, 1988. The outlet also reported that the Hollywood producer died at his Manhattan home.

She was arrested for DUI

Back in May 2013, Jacqueline was arrested for driving under influence. As per the official report, Jackie was heavily intoxicated when local police stopped her in Naples, Florida. As a matter of fact, police arrested Jackie when they responded to a report of her driving without headlights.

Meanwhile, as officers tried to handcuff a male passenger, Jackie grabbed at an officer and ‘began shouting.’ TMZ published a statement of the arresting officer that read:

“I was afraid that the suspect may run into traffic on the highway, so she was taken to the ground due to her unpredictable behavior, then secured in handcuffs.”

Jackie was, however, released shortly after her arrest on a $1,000 bail.

Well, as we mentioned before, Jackie doesn’t indulge in being in the media limelight. Therefore, she hasn’t revealed much about her relationships and love life as well. But still, there have leaked some details about her love life and marriages. In fact, Jackie has been married thrice.

Her first marriage was to Scott Pontius. Jackie was working as a receptionist at Riverton Hospital at the time. Jackie reportedly met Pontius when she moved into a home overlooking Puget Sound. The Seattle Times reported Pontius’ parents owned a waterfront residence. The outlet also reported Pontius was a Highline Community College graduate and he worked in construction and volunteers with the White Center Fire Department.

In the article, Times reported that the pair were set to tie the knot on 17th August 1996 at the Inn at Semiahmoo. The couple, however, couldn’t remain married for a long time. Unfortunately, we have no info on when and why they divorced.

After her divorce from her first husband, Jacqueline married Mark Danforth. Even though there is no info on when they got married, we can tell for sure that the ex-pair walked down the aisle during the mid-2000s. Their marriage didn’t last long as well, but it’s not clear when they parted ways.

Meanwhile, Pop Culture mentioned that Jackie was with her husband “Dennis Pinkham” when she was arrested for DUI in May 2013. The site also mentioned that when Pinkham was arrested he had marijuana in his pocket. But, the fact that Dennis is Jackie’s husband is yet to be verified.

How Much Is Jacqueline Dens Guber’s Net Worth?

As per the reports, Barbara Walter’s daughter, Jacqueline has a net worth of around $1 million as of 2022. On the other hand, her mother who is a famous journalist has a net worth of over $170 million, as per Celebrity Net Worth.