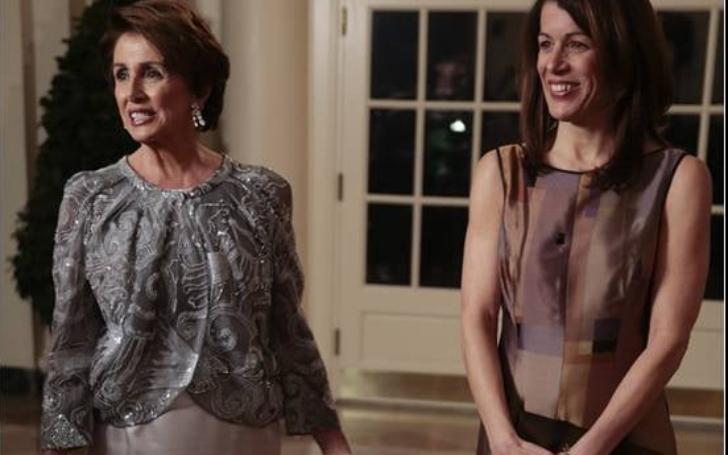 Jacqueline Pelosi is a familiar name for those who have been following US House of Representatives speaker, Nancy Pelosi. Yes, she is one of five children between Nancy and her husband of many years, Paul Pelosi.

Unlike her mother Nancy, who is a big politician, Jackie treads on a different path. She currently owns and serves as the studio teacher at ArtMix Studio.

Besides, Jacqueline is relishing a beautiful marital life with her husband of several years, Michael Kenneally. The pair is a proud parent of three sons. Curious to know what does Jackie’s sons do and what is she doing? Scroll down below!

Jacqueline Pelosi is the daughter of Nancy and Paul Pelosi

Jacqueline Frances Pelosi was born in December 1967, in New York. She is the third child between Nancy Pelosi and her college sweetheart turned husband, Paul Pelosi.

She belongs to the Italian-American ethnicity and has American nationality.

When Jackie was around 20-months old, she moved with her parents and elder sisters to San Francisco, California. She spent the major portion of her childhood in the state and graduated from a local high school. Right after graduating, she enrolled at the University of Southern California. Subsequently, after one year, she transferred to Georgetown University and joined the Bachelors in Political Science and Government program.

After graduating in 1989, she studied Master of Education in Arts at the University of Houston. In addition, she also specialized in Special Education and Teaching from the same university.

She has two older sisters, Nancy Corinne Prowda, born September 28, 1964, and Christine Pelosi, born May 5th, 1966. The oldest of the Pelosi brood, Nancy Prowda works as a sales and marketing professional in Fountain Hill, Arizona. She is married to Theodore Jeffrey Prowda.

Christine, on the other hand, is an author and a Democratic Party Political strategist from California. She married Peter Kaufman in 2008 and shares one kid with him.

Paul is a businessman who has served on the advisory board of countless Fortune 500 companies. Meanwhile, Alexandra is a journalist and a filmmaker. She is a mother of two kids whom she shares with her husband Michiel Vos, a Dutch-American journalist.

Safe to say, all five of Pelosi’s siblings have made a name for themselves without any particular aid from their parents.

What does Jacqueline Pelosi do? She is an Art Teacher

Since January 2005, she has been serving as the Owner/Director/Teacher at the Art Mix Creative Learning Center. The art studio focuses on teaching toddlers, teens, and adults alike. It has classes year-round with multiple art camps. The whole concept first came into Jackie’s head back in 2005. She always dreamt of opening an art school, for normal or specially-abled students.

Prior to opening this school, Jackie worked closely with kids during her time at the M.D. Anderson Cancer Center. Moreover, she also worked with numerous children’s organizations as well. Back in the 90s, she also worked as a promotions coordinator at Gourmet Magazine in New York.

Jacqueline married her college sweetheart in 1993

On June 19th, 1993, she exchanged vows with Michael Terence Kenneally, an Irish-born American businessman. The holy ceremony took place at the Catholic Church of St. Helena and Rev. Royden B. Davis officiated the wedding. Both sides of the families were present in the matrimonial.

Talking about Jacqueline’s husband, Michael, he currently works as the Business Unit Manager at his dad’s firm, BS&B Safety Systems. He has been working at the company since February 2003. He graduated from Cornell University with a Master’s Degree in Business Administration back in 1993.

The pair lived in California up until their marriage and then moved to Houston, Texas in 1993.

The lovebirds are proud parents of three adult children, Liam, Sean, and Ryan Kenneally. Let’s talk in-depth about their lives.

Liam Kenneally works as an Analyst and Innovation Strategist at United Airlines in Illinois. As for his education, he is studying at Georgetown University, his parents’ alma mater, and studying Bachelor of Science in BSFS, Culture, Politics, and Economics. Initially, he received an Advanced Placement Diploma from Strake Jesuit College Preparatory.

Jacqueline’s second child Sean Kenneally, well, he is a rather fascinating young man. Not only did he excel in sports, but he is also a well-versed singer. He played football for his college, Strake Jesuit High School. In addition, the 21-year-old has also recorded a few songs as well. Moreover, he is also a budding actor and model.

The third one of the Kenneally brood, Ryan, like his brother Sean, also played football for his college, Strake Jesuit High School. Furthermore, he is pursuing a Bachelor of Science degree in International Business at High Point College in North Carolina. He also helps out his mom as a studio assistant at her art school, Art Mix Studio.

How much is Jacqueline Pelosi Kenneally’s net worth?

As of 2022, her net worth stands at $400,000. Apart from herself, her husband also earns big bucks from his business. On the other hand, Jackie’s mom Nancy has a staggering net worth of $120 million.