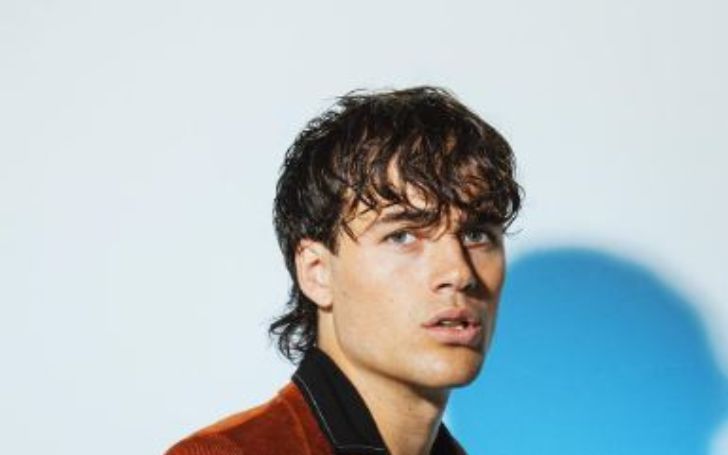 Jamie Flatters is a raising British actor. Although the emerging actor has a few credits under his name, Jamie has already appeared in some big-budget movies. Yes, Flatters has been in the light for his role in the much-awaited movie Avatar: The Way of Water (2022). He played the role of Neteyam, the eldest son of Jake (Sam Worthington) and Neytiri (Zoe Saldaña).

With the release date of the movie coming closer, many people are also curious to know who is actually Jamie. Has the promising actor also appeared in other movies and TV shows? To find the answers, let’s explore everything about him in the following article.

When Was Jamie Flatters Born? Details On His Age, Parents, & Siblings

Jamie Flatters was born on July 7, 2000, in London, England to Paul Flatters (father), and Anna Grey (mother). As of 2023, Jamie is 22 years old. Talking about his siblings, the actor has two siblings named George Flatters and Matthew Flatters.

Talking more about his family roots, Flatters is the grandson of Eleanor White and Alexander Grey. Furthermore, his great-grandparents are Eglantine Ellice, Francis Temple Grey, and Leonard White.

Besides, his zodiac sign is Cancer and Jamie is British by nationality.

Academics Qualification: His School and College

The 22-year-old actor attended the Lambeth Academy in London, England. At the age of 15, the academy also declared him the winner of Jack Petchey’s “Speak Out” Challenge. At the time, Flatters gave a speech on the topic “Success.”

Take a look at the video below, where Jamie looked very confident while giving a presentation.

What Role Is Jamie Flatters Playing In Avatar: The Way of Water?

Jamie Flatters is playing the role of Neteyam in the upcoming film Avatar: The Way of Water. His character Neteyam in the movie is the eldest son of Jake (Sam Worthington) and Neytiri (Zoe Saldaña).

Furthermore, in the film, Neteyam is also described as the “golden child” who can do no wrong. Instead, he protects his siblings. But, how did Jamie get to star in Avatar 2? Well, Jamie was 16 years old when he was chosen to play the character Neteyam by the director James Cameron in the movie.

He was picked from an audition for his role in the movie. Initially, the actor was unaware of which character he was going to play. Moreover, he was even provided the liberty to pick any text or scene from any movie for the audition for Avatar. Thus, Jamie picked his own text to audition from the 1985 teen coming-of-age comedy-drama film The Breakfast Club.

Jamie has achieved a lot of experience after working with the crew members of Avatar 2. After finishing the project, he also watched the film with audiences at its Premiers. Well, he says he quite liked the movie.

It doesn’t matter whether other people liked it or not, because, Jamie was waiting for the movie to be released for years and years. Jamie feels pleasure that Avatar 2 is finally going to feature on some big screens. He even wanted to watch it again.

While the project was still filming, he had many weirdest and hardest parts. The weirdest moment was when they started doing motion capture in the tank. There was one guy’s idea to put goose fat on their body to get into the wet suit.

The hardest part was to hold his breath. Furthermore, Jamie admires the director James Cameron saying,

“He makes a film epic like no other and he’s making films for the enjoyment of making the most transcendent visual possible and to be able to be part of that team. I’m extremely grateful. This was me, my, and other people, like the other young cast first of a film.”

Prior to Avatar, the promising actor has a couple of other acting credits to his name. Jamie made his acting debut after starring in the TV miniseries Flat TV in 2016. The same year, he also appeared in the Children’s BBC sitcom So Awkward.

Furthermore, in 2017, Flatters starred in the thriller TV series Liar. He is also known for appearing as Tedros in the Netflix film The School for Good and Evil.

Jamie also has a few more acting credits in TV shows like Silence, The Forgotten Battle, Close to Me, and Tuesday.

Besides, before acting, did you know Jamie used to work at a car dealership? He also had many other odd jobs before dabbling into the world of acting.

After the biggest premiere of Avatar 2 in London, Jamie has surely earned the enormous attention of both media and the public. He could have taken advantage of that, but, instead of that, his wish was to stay unknown.

‘You don’t have to take the consequences of Press attention or fame, because I didn’t go into this for the attention, but for the acting,’

How Rich Is Jamie Flatters?

Jamie Flatters has successfully accumulated a net worth of $500,000. He mainly makes money for his family through acting. But, before recognizing as an actor, the actor used to have several odd jobs.

Is Jamie Flatters Dating Anyone?

Jamie Flatters has kept all of his personal details to himself. He has yet to come forward about his relationship so far neither the actor has given any hints on his social media. So, as of 2023, we can’t say anything about whether or not Flatters is dating a girlfriend.

Some sources say, he is single at present.

Jamie Flatters is only active on Instagram. He has created an account under his real name with over 70k followers. Most of the time, Jamie shares posts regarding a different kind of art piece, but has never come up with posts that relate to his family.

How Tall Is He?

Do You Know Jamie McShane Wife? Story Of His Marriage, & Relationships