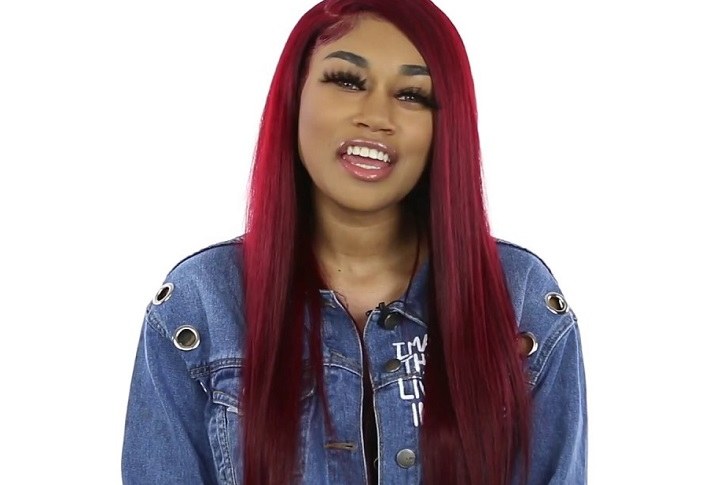 Jania Meshell is one of the recognized faces on social media. She has amassed over 2.9 million followers on Instagram, which mostly features promotional photos. The social media icon also runs a popular eponymous YouTube Channel which has clocked over 602k subscribers as of 2021. Her channel mostly focuses on personal vlogs and beauty product reviews.

Besides, Meshell attracted huge media and public attention after her tumultuous relationship with her ex-boyfriend, Kentrell Gaulden, a rapper (known as NBA Youngboy). The now-former flames, who dated for a few years shared a son, Kacey Alexander Gaulden.

After their nasty break-up, Jania moved on with Dejounte Murray, a professional basketball player. Jania has inscribed a secret tattoo on her shoulder that reportedly features Dejounte’s name. But the question is are Jania and her one-time beau Murray still together?

Let’s know all the details about Jania, from her unpleasant split with NBA Youngboy to her botched plastic surgery experience.

Who is Jania Meshell? Her Relationship With Her Dad

Jania is a social media star and a model. She was born on 11th Jan 2000, in the United States. And her age is 21 as of 2021. She became a cheerleader at the age of 10. She used to play school volleyball as a high school girl.

Besides, talking about her parents, the Instagrammer opened up about her relationship with her father in her YouTube video titled, “MY DAD DOESN’T LOVE ME….”

“Me and my dad never really had like a close relationship.”

Here is the full clip,

Jania is an American as per her nationality and belongs to a mixed ethnical background.

Meshell began her amateur modeling career at 14. She also appeared in the XXL magazine campaign, Freshmen Class in 2018. Furthermore, the model often shares promotional posts on her social media handles, especially on her Instagram.

Is a Brand Ambassador of ‘Fashion Nova’

If you have a good fan following on social media, various brands and companies approach you to promote their products. Jania, who has +2.9 million Instagram followers endorse several brands.

For the past few years, many young stars have been embarking on the Youtube scene professionally. Jania Meshell is among one of them. So far, the young lady has racked 614k subscribers on her self-titled channel.

Jania often posts her personal videos on the channel, some of them are titled ‘I HAVE A SECRET TATTOO’, ‘I ALMOST DIED’, and ‘UNTOLD CONFESSIONS’ as well.

In addition, Meshell runs her self-titled fashion line that comprises eyelashes, hair shampoo, lip gloss, and more other items. It also has an Instagram account with thousands of followers.

What is Jania Meshell Net Worth?

Meshell has earned a good amount of money from her multiple roles. As of 2021, her estimated fortune stands at $1 million. She mainly makes money from her Instagram account and YouTube channel.

Besides, the model currently reises in Baton Rouge, Louisiana with her son.

The couple never revealed when they first crossed paths and how it all began. But, their relationship went on to become the subject of media when the rapper got caught on the camera, slamming his girlfriend in a hotel hallway room, in Waycross, Georgia.

On the surveillance footage obtained by TMZ, the rapper was seen viciously throwing his girlfriend down on the floor of a hotel.

A few hours after the incident, NBA Youngboy was arrested in Tallahassee for kidnapping and other alleged crimes. Despite the violent moment caught by the camera, YoungBoy’s girlfriend Jania told that they were just engaged in horseplay. She also never appeared in court until the case was finalized in Dec 2019.

NBA Youngstar scored a plea deal instead of a Jail term. The court ordered him to spend 12-month on probation and penalized $1,500.

Meshell has a kid, Kacey Alexander Gaulden with her ex-beau Youngboy. She gave birth to a baby boy in late 2018. NBA Youngboy was not allowed to visit his ex-girlfriend and their child after the rapper was charged with aggravated assault. But, Youngboy was able to meet his son after his plea deal in 2019.

Sources address Jani and her boyfriend Youngboy split when she was pregnant with their first child.

According to some authorized online sources, soon after her messy break-up with her former beau, moved on with her reported-new boyfriend Dejounte Murray, a San Antonio Spurs player. Their dating rumors surfaced after the two frequently appeared together back in 2019.

They both have kept their romance away from the public eye. On 18th March 2020, Jania tweeted something about her beau and her son. She said,

“Son healthy, My man the best and I’m blessed. Why must I embarrass myself on here fw these clown as mad hoes.”

But, for the past several months, it looks like their relationship became over as neither Jania nor her alleged beau Murray have yet to share a single photo, instead, the NBA player removed the link to Jania’s website from his Instagram profile.

The former NBA Youngboy’s girlfriend has inked a tattoo on her right shoulder that reportedly features the name, Dejounte Murray, her alleged boyfriend partner. She blurs it out completely and often covers it up with her blonde hair.

Back in 2020, Jania was in a relationship with her ex-boyfriend YBN Almighty Jay. She first opened up her relationship with YBN on an Instagram session posted in June 2020. Since then, they were also regular on their respective social media handles.

Despite their initial smoldering romance, the ex-duo gradually faded away from the media and never revealed when did they break up and why?

Jania Meshell is Dating Her Boyfriend Devin Haney in 2021

The Instagram model is in an on-and-off relationship with Devin Haney, a professional boxer from San Francisco, California. Sources say the couple started dating back in early 2021. In March of the year, the two reportedly got engaged.

But, in May, Jania and Devin announced they both are single on their Instagram stories. In fact, they are yet to separate but they seem they are in an on and an again-off relationship. Meshell shared a romantic photo with her new boyfriend, Devin, on her Instagram on 2nd June.

Jania Meshell underwent cosmetic breast surgery in 2019. In an exclusive interview with DJ Smallz Eyes, Meshell shared the horrific experience with the surgery. She said,

worst experience ever, I hate them, I almost died.

The Instagrammer said that one of her breasts caused a fatal blood clot,

I got a blood clot, and they were like, you know… If I didn’t get it fixed, It could cause more problems. They had the whole implant upside down, so I felt it in my armpit and couldn’t really lift this arm, it was just the worst experience. When I went back to get it fixed it was still messed up

The surgeons also messed up during surgical procedures that resulted in some serious pain. She even lost her mobility. Jania paid $700 for the botched surgery.

Who is Dejounte Murray Girlfriend? Reportedly Tattooed His Name

Who is Jania Meshell? Details on Her Son, Tattoos & Plastic Surgery