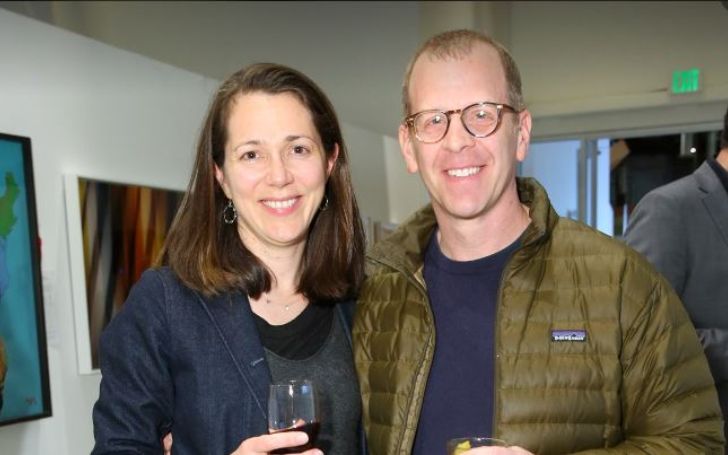 Janine Poreba is a Harvard graduate and an English instructor at Santa Monica College who is better known as the longtime partner and wife of The Office actor, Paul Lieberstein (Toby Flenderson). Janine’s partner, Paul was also the NBC sitcom’s writer and executive producer in addition to being a co-showrunner on Aaron Sorkin’s HBO political drama series, The Newsroom.

Poreba and Lieberstein have been together since the late 2000s and now are also parents to a daughter. Just as much as Lieberstein’s life is open to question, the biog of his wife is a tough proposition too. And it has been so since she started dating Paul.

There, nonetheless, have been few detailings on her regardless. Well, there have been a lot of questions regarding Janine Poreba, including her relationship with Lieberstein, her reported appearance on The Office, and more. So, let’s try to tick all the boxes here.

Both Of Janine Poreba Parents Were Academically Adept

Janine comes from a family of academics and educators. Janine Serafin Poreba who was born around the year, 1973 is the daughter of Elizabeth Poreba and John Poreba.

Janine’s father taught science at Columbia Grammar and Preparatory School in New York during the late 2000s. Her mother too was reportedly a teacher at Bard High School Early College, New York. Though it is unclear if Lieberstein’s wife, Janine’s parents are still holding on to their aforementioned jobs.

Poreba Is A Native Of Manhattan

The wife of the Mindy Project director likewise did her master’s from the Monterey Institute of International Studies in Monterey, California.

Poreba and the Newsroom director, Lieberstein married on Saturday, July 17, 2008. The evening wedding had the Rev Dr. James G Speer, a Presbyterian minister as their officiator, and Battery Gardens, a restaurant in New York as the venue. A few days after the nuptials, The New York Times reported Poreba would be keeping her name.

Poreba’s mother-in-law is a clinical psychologist while her father-in-law is a partner in the Stamford law firm St. Onge, Steward, Johnston, and Reens. There, Lieberstein’s father apparently specializes in intellectual property law.

Meanwhile, Janine is the second wife of the writer/director, Lieberstein. She and the West Hartford native apparently started dating in 2007. As such, Lieberstein once revealed it was the year when he had just started going out with the Hamilton College graduate.

They are now also parents to a daughter.

Poreba Career As A Language Instructor

Since the point she came to public attention, Poreba has been defined as an instructor in English as a second language at several institutions.

During the time of her marriage to Lieberstein, Janine was a mentor at Santa Monica College in Santa Monica, California. As per some sources, the mother of Lieberstein’s daughter is still sticking with her aforesaid profession.

Did Janine Poreba Appear In The Office?

Janine was in her husband’s career-defining show, The Office indeed. In the Emmy-winning NBC series, Poreba appeared as Amy at Phyllis’ wedding in the 15th episode of the third season of the American show.

Janine played Lieberstein’s character Toby’s ex-girlfriend in the show. In the show, she sits next to him and Kevin (Brian Baumgartner) at Phyllis’ marriage to Bob Vance. In the first episode of Janine, Kevin becomes very skeptical about how Toby landed such an attractive lady as Amy.

In the episode, Toby reveals he met Amy at the gym. Jeanine’s second appearance in the Office comes in the show’s 4th season, episode, “Dunder Mifflin Infinity.” This time she reprises her role of Amy whom Toby brings into the office to meet everyone.

The on and the off-screen couple even makes out a bit in front of everyone. Though the show apparently deleted the make-out scene of Toby and Amy.

As a matter of fact, Janine was just Lieberstein’s girlfriend when she made her appearance on the show.

The Show Presumably Named One Other Character After Poreba

One another Easter egg related to Janine is the show took inspiration from her name to label one of their other cameo faces, Isabel Poreba (Kelen Coleman), Pam’s cousin and Dwight’s future lover. Isabel and Dwight hook up during Jim’s (John Krasinski) and Pam’s (Jena Fischer) wedding.

Though the connection between Isabel and Janine is their last name which was pointed out by a random Redditor back in Feb 2022. Although not officially confirmed, the user claimed the show happened to name Isabel’s character after the real name of Lieberstein’s wife.

Not to mention, the series has the occasional custom of dropping the names of the actors’ spouses and their children as well or sometimes even bringing them in front of the camera.

Janine somewhat helped her husband get rid of his lifelong back pain and in turn, also inspired him to make a movie about his experience. It was Paul’s 2018 comedy film, Song Of Back and Neck. When asked about the film and how he came up with the idea of making it, the 55-year-old actor told The Observer,

“I had this awful back pain for over 20 years, and I saw everybody and did everything about it.”

Paul added it was his wife, Janine who then gave him a book to read after which the situational comedian said his back pain wasn’t there anymore.

Lieberstein explained his pain was more of a psychological than an actual health issue. He said the ache had been troubling him mostly because of his past issues. The Togetherness actor claimed that it was a mind-body connection thing. As for the movie, Song Of Back And Neck, Paul said the film focused on suppressed anger which the book dealt with.

Is Poreba On Social Media?

While her husband, Lieberstein started his own journey on Instagram, Janine still remains to be seen on such hangouts.

To say more, Poreba hasn’t been around social media as much; in fact, the now 49 years old is virtually a nobody on so forth extensities. Further, even her husband seems to respect her privacy as he is yet to share even a sighting of his wife, Poreba considering all his overtness with his behind-the-scenes doings on his Instagram.