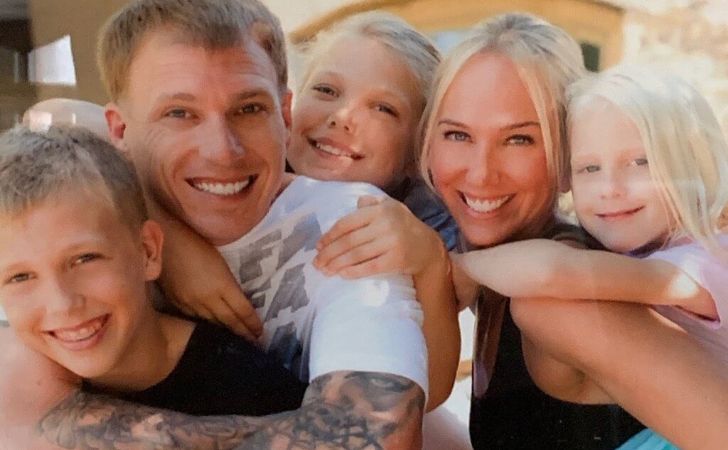 American former basketball player Jason Williams has had massive success as a professional. And the case is the same with his love life. He is married and leads a pretty decent marriage with his wife. Moreover, the former NBA player, Jason also has three children.

Well, like him, his spouse Denika, daughter Mia and his elder son are also into sports. Here is a comprehensive account of Jason Chandler Williams’ married life and children.

Jason Williams is married to the University of Florida alumna Denika Kisty Williams. They got married in 2003 and are together ever since.

Needless to say, he shares an incredible bond with his wife. Though the basketballer is not much into revealing his personal life in the media, he does have immense love for his family members.

In fact, in his NBA profile, Williams listed his family as his “most treasured possession.”

Denika often accompanies Jason during games and sports events. Check out this post from March 17, 2007, when the two arrived together at the “A Knight With The Champions” event in Miami Beach, Florida.

In a marriage that has exceeded 18 years, he has also welcomed three children.

Jason And wife Denika Are Parents to Three Children

As we have mentioned, Jason Williams has three children with his partner Denika Williams. And to your surprise, all their kids, Jaxon, Mia, and Nina, are already into sports.

Their eldest son Jaxon is 18 years old and was born on September 23, 2001. Like his father, Jaxon is also a basketball enthusiast. Likewise, their daughter Mia is 16 and is a softball player. As of 2020, Mia is an infielder from Windermere, Florida, and was the #1 overall player in the 2023 Extra Elite 100.

Nina is so good at tennis. She plays basketball too and trains a lot with Mia so she’s around softball. Nina is definitely the best athlete of all of us.

Both Jason and Denika Are Pretty Close to Their Kids

Like any parents, Jason and his beautiful spouse Denika share a close relationship with their children. They are both enjoying their life as parents and often share their kid’s photos on their respective social media handles.

My son @jaxonwilliamss!!! Happy birthday Chubbs!!! 🎉🔥🙏🏼 What a wonderful 18 years it has been!! I know there have been ups and downs but I wouldn’t change any of it!!! You mean more to me than you even know! I hope you have a great day!! I love you!! 💙 #familyovereverything

Likewise, Denika, too, is pretty close to her kids and is often out assisting her daughter with all the sports activities. Not only this, but she is also up with appreciation and encouragement about her daughters. The below Twitter post tells a lot about the relationship she shares with Mia and Nina.

One of the best players and teammates my kid has ever played with! Her ride or die. Love her like my own. My Shorty girl!!! https://t.co/0clsPdILKa pic.twitter.com/Ws2dEQxvyr

Jason Has Tattoos of His Children’s Name

Jason is a huge tattoo lover and has inked several tattoos on his body. Along with having a tattoo of a panther on his right arm and an eye on his chest, he also has tattoos of his children’s names on his forearms.

Well, regarding the tattoo of the eye on his chest, he often says, “It’s why I pass so good, I have a 3rd eye”.

Likewise, he also has inked “WHITEBOY” across his knuckles and a picture of a dragon on his left arm.

Like her NBA husband, Denika also has an appetite for sports. A University of Florida alum, Denika is a former member of the Florida Gators track and field team. Not only this, but she was also an All-American Javelin thrower.

While she doesn’t physically involve in sports at present, she gladly helps her kids out with sports.