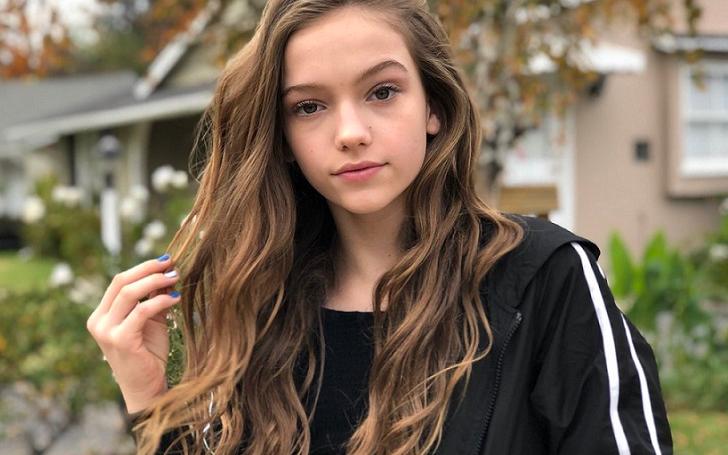 Jayden Bartels is one of the quickly-established social media stars. She has already made quite a name on several respective online platforms like TikTok, Instagram, and YouTube. She has +8.6 million followers on her TikTok as of 2021.

In addition to her mega-fan following on social media, Bartels has also an innate gift for acting and dancing. The actress played Peyton in the acclaimed TV series Coop and Cami Ask the World (2018-20).

Who Are Jayden Bartels Parents?

Bartels was born on 1st November 2004 in Los Angeles, California, to American parents. Bartels rarely shares photos of her father and mother on her social media accounts.

One of these rare occasion came on 15th May 2017, Jayden posted a photo with her doting mom in the honor of Mother’s Day.

Happy Mother’s Day to the most amazing mom I could ask for!☺️💘 I am forever grateful to have you as my mom!💞 Ily💛

Furthermore, Bartels once uploaded a video with her dad titled ‘Dancing with my Dad‘ on her eponymous YouTube Channel.

As for her education, Bartels attended Pine crest School in Florida. She currently studies at a private school.

Jayden grew up in Los Angeles with her two older brothers. One of her rarest pictures with her siblings is,

In the picture, she also mentioned that her brothers moved away when she was quite young. Maybe that is why we don’t usually see them in her Instagram posts. Nevertheless, the three of them still share a deep bond.

Passionate Dancer Since an Early Age

Although it is really a daunting task for everyone to lead a successful career in various fields hand in hand, Jayden has proved it. The lady with many talents developed a strong passion for dancing from the age of 9.

Bartels gradually involved in many school talent shows. Hip-Hop is her favorite style of dance but can also perform in a variety of styles including ballet, jazz, contemporary, tap, and lyrical.

She Is a Model

Jayden Bartels did her first commercial at age 11. She subsequently appeared on television and she is famous for her Toys-R-Us, El Monterey, and Pizza Hut ads.

Besides, Bartels is also a long-time Nike promoter who has already shared plenty of photos promoting the brand on Insta.

As we mentioned above, Jayden Bartels is one of the youngest social media influencers with millions of fan following.

As of 2021, Bartels’ TikTok account has over 8.6 million followers. She makes videos under The Hype House, an LA-based space for content creators. Other members of a collaborative TikTok group are Alex Warren and Kouvr Annon.

The multi-talented young star Jayden has a mega-fan following in almost every contemporary social media platform. While talking about her YouTube channel, Bartels has 790k subscribers in 2021.

Bartels mostly uploads the videos of her singing and dancing to her self-titled channel.

Jayden, apart from her aforementioned endeavors, is an emerging talent in the acting world too. The young actress gained wide recognition after her breakthrough performance in the hit comedy TV series Coop & Cami Ask the World. She portrayed Peyton, Coop’s girlfriend, and gaming partner in the series (2018-20).

Kicked-Off Acting By Performing in Plays

Jayden Bartels became interested in performing from her childhood. She initially worked in productions like Little Mermaid, Alice in Wonderland, Newsies, Mary Poppins, and Little Shop of Horrors.

Bartels’ other successful projects quickly followed, which include works like Criminal Minds: Beyond Borders (2017), Kidding (2018), and Grand-Daddy Day Care (2019).

In 2020, the actress became part of many other high-profile TV shows like Side Hustle and Family Runion.

Jayden also has a gifted soulful voice. The multifaceted teenager has released numerous hit cover songs. Some of them are Meghan Trainor‘s song “NO”, Laura Marano‘s song “Boombox”, “Sit Still, Look Pretty” by Daya, and more.

After making a successful audition at the Purpose Tour Children, Bartels also performed on stage with Pop star Justin Bieber to “What About The Children”.

Is Jayden Bartels Dating Anyone? Who Is Her Boyfriend?

Jayden Bartels is currently dating her boyfriend Armani Jackon. Her beau Jackson is an actor who has worked in many big-budget movies like Cooties, The Last Witch Hunter, and more.

The couple started dating in 2018 and are still together. They both have posted a number of photos of themselves on their respective social media accounts.

On 15th Feb 2020, the actress also posted a photo with her boyfriend, Armani, on the occasion of Valentine’s Day.

The two are also avid travelers. In July 2019, the two were spotted enjoying their time at Santa Monica Beach, California.

The stunning actress has an outgoing personality, so it only natural she has a lot of friends. However, every person has that special friend whom they can rely on when things go astray.

Likewise, Jayden is quite lucky in this aspect. Her best friend forever, another actress Annie LeBlanc is always there to support her no matter the odds. Bartels shares a lot of photos with her bff, depicting their strong friendship.

Annie, who was once dating Asher Angel, and Jayden most recently graced the front cover of the Girl’s Life Magazine.

What is Jayden Bartels Net Worth?

Jayden Bartels has a $1 million net worth as of 2021. She has collected the majority of her wealth from her work in multiple professions.

As per estimation made by Socialblade, Bartels’ earnings from her YouTube channel ranges from $3.7k to $58.7k a year.

Jayden Bartels Runs Her Own Merchandise

Jayden has also been embarked on online business for the past few years. She runs one of her merchandise under the name MissJaydenB.

Bartels announced her other self-titled merchandise via Twitter on 10th Feb 2019. The clothing line also features almost all the above-mentioned items.

Jayden used to play soccer who became a member of the school’s team for four years. She also won the championship for two consecutive years.