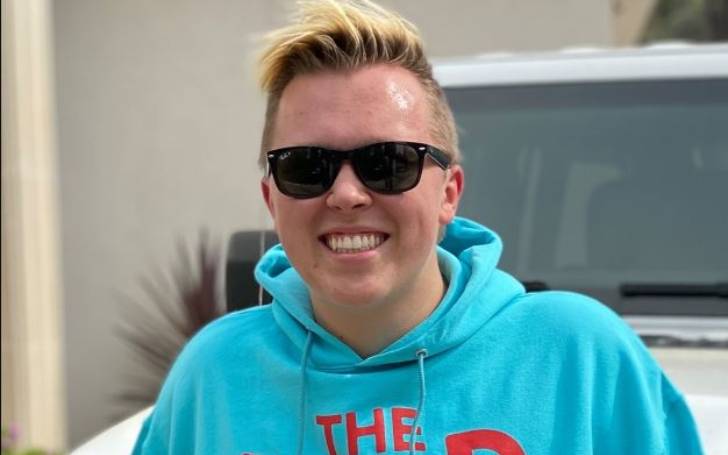 Jayden Siwa, 22, is an American social media influencer and real estate agent by profession. Though Jayden is a star on his own, he is most popular as the older brother of YouTube sensation JoJo Siwa. She is also a Youtuber and internet sensation with over 11.6M followers on Instagram and over 12.2M subscribers on YouTube.

Apart from social media, Siwa has made a strong portfolio in the real estate world as well. So far, he has sold four houses costing around hundreds-thousands of dollars. In this article below, we will talk more about his career achievements, early life, rise to fame, and dating his girlfriend. Are Jayden and Abbie Crandal still together?

The real estate agent Jayden Thomas Siwa was born on 20th May 2000, making him 22 years old in 2022. He was born in Omaha, Nebraska, USA under the birth sign Taurus.

He is the older child of Tom Siwa and Jessalynn Siwa. His mother is a dance instructor and his father is a chiropractor by profession.

Likewise, he is the older brother of Joelle Joanie ‘Jojo’ Siwa. She is a popular dancer, singer, actress, Youtuber, and social media influencer.

As for his education, Jayden finished high school at Roncalli Catholic High School on 22nd April 2019. He then took real estate and mortgage courses online with The CE Shop. It is an online E-Learning platform that provides online professional education about real estate. Their company is based in Denver, Colorado.

Not to forget, Siwa was on the school baseball team and even helped the team to win a tournament championship.

The 22-year-old is currently working as a full-time real estate agent working at Compass. Before this, he was a social media influencer who began his journey in 2017.

He started his Youtube journey on 10th Jan 2017 with his self-titled YouTube channel. As of September 2022, his channel has over 94.8k subscribers and over 7 million total views on his 468 videos.

Looking through his videos, it looks like he often does food reviews, especially fast foods. Similarly, we can spot Jojo on his videos like Siwa Family’s Mores Cook Off,

Later in 2022, Jayden forged an interest in real estate and began his journey with Compass. According to his bio, he grew fond of the real estate business after he fell in love with the L.A. lifestyle. Who wouldn’t fall in love with Los Angeles City, right?

Jayden Siwa’s Sister Jojo Is An Influencer Just Like Him

Born Joelle Joanie Siwa on 19th May 2003, Jojo is 19 years old in 2022. She first rose to the limelight as a top-5 finalist in the second season of Abby’s Ultimate Dance Competition. Also, she was the youngest contestant in the show.

Similarly, she also competed in the fifth season of Dance Moms alongside her mother Jessalynn Siwa. They even guest appeared during season eight.

In 2016, her fame grew when she released her debut single Boomerang as a digital single. The song addresses online bullying and has over 950 million views and over 5M likes.

In 2018, Siwa announced her first major concert tour in 2019 called D.R.E.A.M The Tour. So far, she has released albums like Celebrate and Jojo’s Rockin’ Christmas released with Viacom International. Likewise, her popular songs are Kid in a Candy Store, Hold the Drama, Every Girl’s a Super Girl, Only Getting Better, and Nonstop.

Moreover, Jojo is also an actress and has a handful of acting credits like The View, God Day L.A., Make It Pop, Bizaardvark, Celebrity Family Feud, So You Think You Can Dance, and High School Musical: The Musical: The Series.

The 22-year-old made a big name for himself using social media platforms in the right way. As of Sep 2022, he has over 143k on Instagram, over 2k on Twitter, and over 94.8k on YouTube.

Moreover, he is most popular on Tiktok where he has over a million followers with over 14 million likes. He uses his fan following to promote his work as well.

On the other hand, his famous sister Jojo has over 11.6M followers on Instagram, over 12.2M subscribers on YouTube, over 678.1k on Twitter, and about 43.6 million on Tiktok.

In addition, Jojo has over 1.7 billion total likes on Tiktok, whereas, she gets around 83k average likes on her IG posts.

Jayden posted a four-series post on his IG wishing his girlfriend a happy anniversary. He wrote,

“Happy anniversary to the best girlfriend ever. It has been the best 2 years of my life! Here’s to 2 years and many more”

Ever since the pair went public with their relationship in 2020, they often appear on one another’s social media profiles.

Similarly, in April, Jayden and Abbie went on a double date alongside Jojo Siwa and her girlfriend Kylie Rock. The four went on a drive-in concert in Jojo’s custom rainbow-painted BMW convertible.

Prior to dating Abbie, Jayden was romantically involved with his Youtuber-girlfriend  Lily Kate Cole. The former couple even made a youtube video titled ‘How We Met’ which was shared on Lily’s channel.

In the video, we can see the formers talking about their first meeting prior to a meet-and-greet session and more.

Lily even calls their first meeting a ‘destiny’ as both of the parties were not supposed to be at the same place on the same day. Kate also reveals that she fell for Jayden after seeing him drink coffee as she is an avid coffee drinker.

They were together from early 2019 until early 2020. While Jayden has already moved on with Abbie, Lily is reportedly single as of 2022.

How Rich Is Jayden Siwa Now? Details Of His Earnings And Net Worth

As a social media influencer, YouTuber, and real estate agent, Siwa surely earns a decent amount of money. According to various online sources, his current net worth is around $1 million as of Sep 2022.

Apart from this, he also earns from sponsorships and endorsement deals with big brands. As per a reliable source, Siwa’s IG post can make between $4219.75 to $716.25 per sponsored post.

On the other hand, his famous sister Jojo Siwa has a net worth of $20 million now. She mostly earns from youtube, acting, TV shows, and her own product sales. She also owns a 6,000-square-foot mansion worth $3.5 million in Tarzana, California.