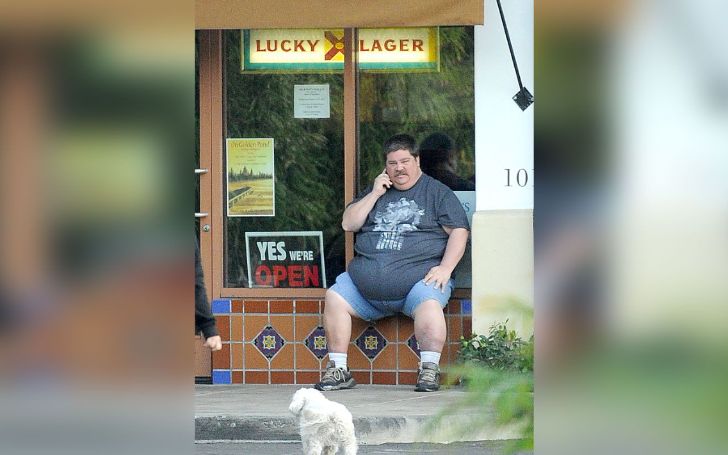 Jess Brolin is the younger son of the Emmy Award winner, James Brolin, and his former late wife, Jane Cameron Agee. 50-year-old Jess’s older brother, Josh Brolin, is also a famed actor in Hollywood like their father. So, what is Jess famous for? Jess is an infamous member of the famous Brolin Family.

Brolin is famous for reasons that do not fairly match his family’s great reputation. Did you come across the rumor of him being homeless in 2014? Well, he apparently was, despite being the son of a legendary actor. The rumor broke out 8 years ago, so where is Jess today? We will know the answer soon.

Thus, in this article, we will take a closer look into the life of Jess Brolin. Despite his family’s legacy, what identity does he hold? Did his obesity almost kill him? Let’s know together!

Jess Brolin is One of the Younger Sons of the Westworld actor, James Brolin

Jess Brolin’s exact date of birth is unknown, but he was born somewhere around 1972 in California. His father, James Brolin, was already a renowned actor since his career began in 1960. Similarly, his mother, Jane Cameron Agee, was also in showbiz and active as a wildlife activist. Moreover, with enough fame and fortune, Jess grew up in Templeton, California.

However, Jess surely did not seem to have a smooth childhood. When he was just about 12 years old, his parents got divorced. This must have had a serious impact on little Jess. On top of this, his father’s multiple relationships after the divorce didn’t really help either.

Two-years after the divorce from Jess’s mother, James married Jan Smithers. From their relationship, they welcomed a lovely daughter together, Molly Elizabeth.

Unfortunately, this relationship was also short-lived, and later in 1998, the Brolin family patriarch exchanged vows with his current wife, Barbara Streisand. The three different marriages of James Brolin blessed Jess with three siblings; Josh Brolin, his one and only biological sibling, Molly Elizabeth, his half-sister, and Jason Gould, his step-brother.

His mother died in an accident

In 1995, Jess lost his mother, Jane Cameron Agee due to a horrible car accident. Jess was in his mid-twenties at that time and had already gone through enough instabilities in life.

The passing away of his mother brought him a massive inheritance, using which Jess moved away from his family. But still, any type of inheritance can possibly never replace

Jess Brolin is a Member of The Famous Brolin Family

50-year-old Jess Brolin is the only member of the Brolin family who is not in the entertainment business. Besides him, almost everyone has some sort of connection to the industry.

Starting with his father, James Brolin; he is one of the most renowned celebrities in Hollywood with two Golden Globe Awards and an Emmy. Brolin has been in the industry for six decades and is famously known for his roles in Westworld, Traffic, and Catch Me if You Can. Similarly, his mother, although not as renowned as his father, was an American actress/wildlife activist.

Second in line is Jess Brolin’s older brother, Josh Brolin. Josh followed in the footsteps of his father. He is best known for his role as Thanos in the Marvel Cinematic Universe.

Not only Jess’s own sibling, Josh but even his half and step-siblings have contributed to this industry of entertainment. As well as that, both of his stepmothers are also in this sector.

After the death of his mother, Jane Cameron Agee, Jess Brolin inherited a 6-figure inheritance. With all this money, he moved to an $800/month apartment in Ventura, California. So, how exactly did Jess become homeless?

As it turns out, Jess quickly ran out of all the inherited money, and in 2011, got evicted from his apartment. He was then reported to be living in his truck but was slowly seen living in the streets too.

Moreover, in 2014, a paparazzi caught him searching through trash cans in Ojai, California. This photo immediately went viral and the rumor of Jess being homeless spread across the country. He was less than 80 miles from the Brolin home, but, was sleeping in parking lots.

Following this news, a source close to Jess Brolin said,

“He will sometimes be sleeping in a field behind shops, basically ­wherever he can bed down. It can be very cold at night as it’s in the valley.”

This really is very heartbreaking.

Jess Brolin’s family, on the other hand, reported that they were in fact trying to help him get out of this condition. His father, James Brolin also released a statement saying that the news “misinterpreted” the photos.

It is obvious from Jess’s pictures that he is an obese man. Who knew that the unhealthy lifestyle that Jess followed in California after the death of his mother will take a toll on his health? Well, apparently it did.

In 2018, people from RadarOnline found Jess with unusually unhealthy feet. They described his legs to be “lumpy with sores”. Moreover, he was suffering from Venous Stasis Sores. These are normally caused due to damaged or abnormal veins. This diagnosis was given by Dr. Charlie Seltzer. He even speculated about the need for amputation if Jess did not take care of himself properly.

It is only a guess, but we believe that this situation was taken under control on time.

Where is Jess Brolin Today?

Jess is not available on any social media sites. He has been a private person since the very beginning. Hence, it is hard to know his exact whereabouts. Similarly, we also do not have concrete information on his love life. Therefore, we can only theorize whether he is married or single today.

However, In a 2021 interview with Parade, James Brolin stated that Jess was living somewhere in “a mountain town”, running a charity organization. We do not know how true this statement is but hope that wherever Jess Brolin is today, he is safe and healthy. We also hope that he is far from his trash-can diving days and living a life with dignity.

As we mentioned above, Jess inherited a huge chunk of money after his mom’s death. Unfortunately, he forsakes all the money in vanity and became homeless. This is why, as of now, his net worth is currently unknown.

On the other hand, his brother Josh is worth a staggering $45 million.