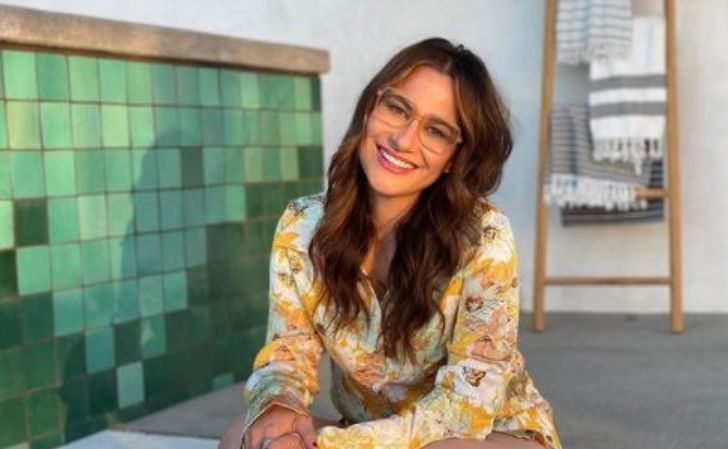 Jessie McLaughlin fully Jessie Lane McLaughlin is the creator and designer behind Jessie Lane Interiors in LA. Her work includes bold colors and original multipurpose furniture. She though is better known as the wife of Youtuber, Rhett McLaughlin. They have been married for over two decades with two sons.

Jessie’s husband, Rhett is an Internetainer who along with his partner Link fully Link Neal is famous for creating and hosting the YouTube series Good Mythical Morning or GMM. Mrs. McLaughlin’s spouse’s joined Youtube alongside Link on Sep 18, 2018. Their channel Good Mythical Morning since then has close to 8 billion views and more than 17 million subscribers.

As for Jessie herself, her passion and conviction for design create more than just an aesthetically pleasing configuration of furniture and soulful spaces.

Ever since getting free of full-time motherhood, Jessie, a southern native now living in Los Angeles, has been exploring her love of interior design on her blog and Instagram channel. Know more about her in the article underneath. Get an unedited version of her life; starting from her upbringing to how she met Rhett to her current endeavors.

Jessie McLaughlin Is A North Carolinian

The Good Mythical Morning co-host’s wife Jessie McLaughlin was born in California but grew up in the rural mountains of North Carolina. Jessie spent her childhood in From Fuquay-Varina, a small town in North Carolina.

Mrs. McLaughlin is the daughter of a dentist father and a mother who loved to design. From her childhood, she was mostly under the guardianship of her mother who also used to design unique, glamorous, and inspiring spaces. She first stepped into the career of designing at age 12, her first personal project was her bedroom.

What Inspired Jessie McLaughlin To Become A Designer?

Jessie’s interest in designing grew when she saw her mother designing her father’s dental office.

“My father had multiple offices and my mom would love to decorate and design them all. Every time I visit my dad’s workplace there would be wonderful pieces of art,”

said the wife of Ear Biscuits host explaining the driving force behind her designing career.

Since her childhood, she has been a fan of Waverly Fabric star motif bedspreads and fleur-de-lis pillows. Jessie studied music and communications at the University of North Carolina.

While still back in North Carolina Rhett’s wife had also taken Bible courses under agnostic biblical scholar Bart Ehrman. It was once reported those studies still have impacts on her and her family’s lives.

Jessie McLaughlin As A Designer

Because of her dad being a dentist, Jessie says dental office designs were influential in her design career. She had even filled her college dorm with true creative outlets, punctuating it with leopard, toile, and vintage finds. Ironically though Jessie didn’t attend any designing course while in college.

The Youtuber/Podcaster’s wife’s passion for design followed her to the West Coast after her young family relocated for her husband’s Youtube pursuits. Jessie realized that interior designing was her true calling after she had completed her long stint as a homeschool mother that included innumerable coats of paint to her Craigslist dining room table.

She once admitted to finding joy in making spaces warm, joyful, livable, and as unique as the people that inhabit them. She also believes spaces have souls.

Jessie likewise says artful tension and resolution in a dynamic space—like in a good story—spark curiosity and create a human connection.

Mrs. McLaughlin doesn’t take herself too seriously, and she’s not afraid of color. The mother of two believes in design that’s hospitable, works for people, and that ultimately, brings them home.

How Jessie Started Her Relationship With Rhett McLaughlin?

Talking about the first time he met his wife, Jessie, the now 45-year-old Rhett in his book, Rhett & Link’s Book of Mythicality: A Field Guide to Curiosity, Creativity, and Tomfoolery writes,

Even though Jessie’s father was my dentist growing up, I had no idea she existed. It wasn’t until my junior year in college, during a trip back home, that I met her.

Rhett says he found Jessie mesmerizing from their first meeting. The Youtuber with close to 18million subscribers felt an instant intense connection with her. Jessie was then a senior in high school.

Speaking of their early relationship, Jessie, on the other hand, said she couldn’t get the tall almost skinny picture of McLaughlin out of her head. In the Oct 2021 podcast of Ear Biscuits, Rhett said Jessie and he was comfortable with each other from the very beginning and shared all kinds of things with each other.

Jessie and Rhett married in 2001 and became parents for the first time in Feb 2004 when they welcomed Locke McLaughlin. They had their second child, Shepherd in 2008. Jessie and her husband waited to get physical up until their wedding.

In addition to two sons, they also have a Maltipoo named Barbara Mandrell McLaughlin. The moniker is because of the couple’s tradition of naming dogs after country singers.

Rhett credits his wife, Jessie for encouraging him to pursue his passion for creating and also says she has been the lynchpins of their family throughout his YouTube journey.

Her husband’s internet partner, the 43-year-old Link Neal, on the other hand, is married to Christy Neal; they tied the knot in 2000 in Kinston, North Carolina.