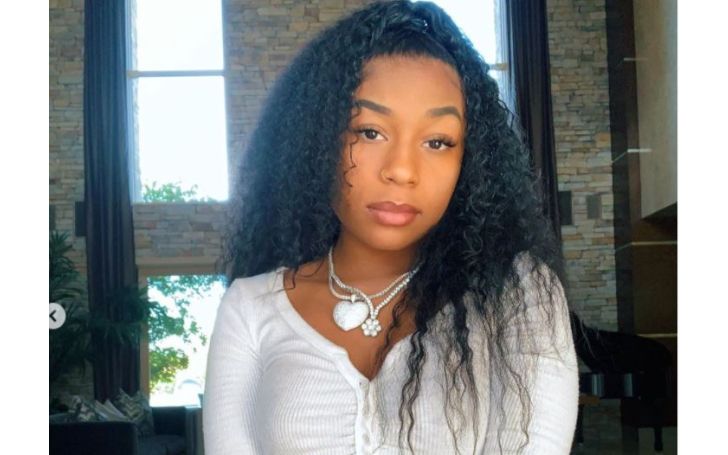 Jirah Mayweather is famous as the daughter of Floyd ‘Money’ Mayweather. The legendary boxer shared Jirah with his late girlfriend, Josie Harris.

The father-daughter duo has their own share of battles between them. In 2020, Jirah called out Floyd for looking after his own happiness as opposed to his kids.

Besides, it looks like Jirah and Floyd have since called a truce and are in a great relationship with each other. Today in this article, we shall discover some interesting facts about the star kid, including her wiki, education, and more!

Jirah Mayweather Wiki-Bio: Who is her mother?

She was born on June 25th, 2004, in Las Vegas, the US. Talking about her ethnicity, well, she belongs to the African-American ethnicity.

Her mother Josie Harris was a multi-talented individual with her hands-on acting and business. She had small acting gigs on Exit 38 (2006), Starter Wives (2013), and the Starter Wives Confidential TV series.

On the other hand, her father is a well-known boxer. Floyd started out his career in 1996. Throughout his career, he has had 50 fights out of which he has won each and every one of them.

How many siblings does Jirah have?

In total, she has four siblings. She is one of four biological kids of Floyd Mayweather. He shares three kids with his late girlfriend Josie. Their oldest kid, Koraun was born on November 17th, 1999. Then Zion Shamaree was born on March 28, 2001.

Further, Floyd also became a father of one more kid, Iyanna aka Yaya Mayweather, born May 20, 2000. Aside from these three, Jirah also has one sibling named Devion Cromwell, who is Floyd’s ex-girlfriend Melissa Brim’s son from another relationship.

It wasn’t all sunshine and rainbows at the Mayweather household. Many of you might already know that Floyd has a history of domestic abuse.

Likewise, his former partner and Jirah’s late mom Josie also became a victim of one of his tirades, not just once but twice. At first, Harris filed a domestic violence charge against her partner in the early 2000s.

Back then, he was suspended for six months including two days of house arrest, and had to perform 48 hours of community service. The charges were later dropped in 2005 when Josie herself confessed she lied about the domestic assault.

But the abuse didn’t stop there. Josie again filed a domestic battery against him. He was taken into custody in September 2010, however, he got out of prison after posting a $3000 bond.

As if all this wasn’t enough, Josie once slammed a $20 million defamation charge against her boyfriend after he publically called her a drug abuser during an interview with Katie Couric.

Jirah’s mother Passed away in 2020

In a tragic turn of events, Josie Harris passed away at the age of 40 in March 2020. Local authorities found her unconscious body in a car outside her residence in California.

There was no suspected foul play. An autopsy, later on, revealed her exact cause of death was a drug overdose.  Despite his personal battle with Josie, Floyd paid a heartfelt tribute on her 41st birth anniversary in 2021.

He wrote in his caption, “I had to come see you for your birthday Josie. R I P my angel.”

Jirah called out her father for being selfish

In August of 2020, a couple of months after her mom’s death, Jirah publically lashed out at her father. She vented out her frustration on her Twitter account and wrote,

“@jirahmilan, I will always love you unconditionally and always know that you can accomplish anything you set your mind to. There is no limit to how far you can go in life. Always put God first and everything else will fall in place.”

Fans understood that it was a traumatic event for Jirah as she lost the only person in the world who loved her the most. Moreover, Jirah also scared us all when she shared a TikTok video while singing along the Logic’s song ‘1-800-273-8255 (Suicide Hotline). Fans started pouring their support towards Jirah for which she is forever grateful.

What is Jirah Mayweather doing nowadays?

Well, as of now, Jirah is busy being a social media celebrity. She is active on Instagram and YouTube.

Jirah shares vlog-style videos on her YouTube channel. She has so far more than 5k subscribers. In addition, her Instagram boasts more than 280k followers.

Well, the youngest of the Mayweather brood is currently studying college. She formerly finished her high school at West Ranch High School. She majored in Health and Physical Education/Fitness.

When Jirah graduated from high school, she shared it on her Instagram account. In the caption, she paid a heartfelt tribute to her late mom and wrote, ‘Mama I did it.’

Does Jirah Mayweather have a boyfriend?

As of now, she doesn’t seem to have a boyfriend. At the moment, Jirah is giving time to herself. Jirah is currently enjoying her new college life with her friends.

How much is Jirah Mayweather’ net worth?

Well, Jirah is trying to carve out a name for herself in the social media world. As we all know that social media personalities these days earn a lot of money so it is highly possible Jirah will also earn a decent amount of money from it.

As of now, her career is just booming so any take on her net worth would be foolhardy. On the other hand, her father is the richest boxer of all time with an astonishing net worth of $1.2 billion.