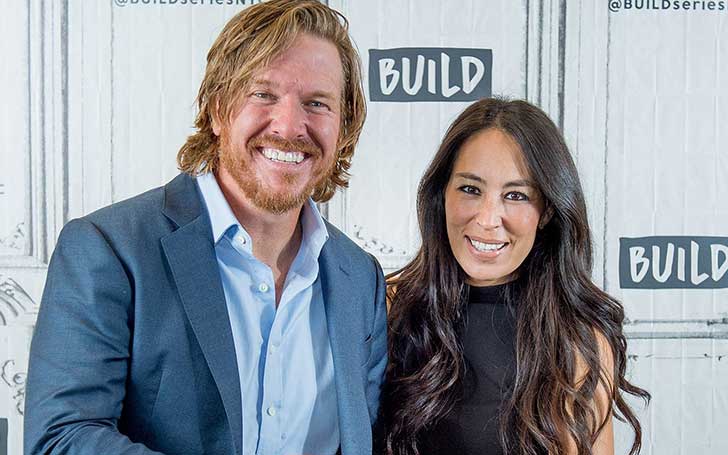 Television stars Joanna Gaines and Chip Gaines started their married life in 2003. The husband-and-wife faced several ups and downs in their nearly two-decades-long journey as a married couple. However, they always found a way through it, which makes them one of the most adorable couples in the industry.

Besides, the former Fixer Upper stars have five children together and are leading a happily married life together. But, how their love blossomed? Were they connected at their very first meeting? We have all the answers here:

Chip and Joanna Gaines Met in 2001 in Waco, Texas

Even before Chip and Joanna Gaines met in person, Chip had thought of marrying her while he saw a picture of her at her father’s shop. Talking to PopSugar, Gaines, 45 told he knew he would marry Joanna just seeing “the picture on the wall.

Chip Gaines went to Joanna’s father’s automotive business shop another time to get his car’s brake fixed. Luckily, her father wasn’t there and Joanna was working in the office. Joanna was mesmerized by Chip’s personality in their first meeting. She told PopSugar that:

“We met in the waiting area and hit it off immediately. He was genuinely engaging and he had such a sincere smile.”

Joanna further told the outlet that she took a couple of months to open up to Chip. She said she liked his kindness and she knew he was the one whom she could trust.

Chip and Joanna Gaines started dating in 2001. The lovebirds spent their first date sitting on a porch of a restaurant in Waco. The pair also enjoyed fried chicken at the restaurant.

Meanwhile, Joanna described Chip as an entirely different man on that day than she had seen at her dad’s shop. She said Chip was bald and had worn a baseball cap, and his face looked like he had work outside “in the hot sun all day long.”

Later, it turned out that Chip had shaved his head to support his friend who was battling cancer.

Months passed by before Their Second Date

After their first date, Chip and Joanna Gaines didn’t meet again for months. Chip explained that he had made a bet with his roommate John on “who could go longer without calling their dates back. Chip said, he really wanted to win the $50 bet with John so he didn’t call Joanna.

After that, they started going out frequently and the two found some similarities between them including that they both grew up in a similar “religious environment.” The fact helped them get connected soon.

While Joanna and Chip are polar opposite in their personalities the pair shares some coincidental similarities. Both being born in different states ended up moving to Texas.

Chip was born in 1974 in New Mexico and he was eight years old when he moved to Colleyville, Texas. On the other side, born in Kansas in 1978, Joanna relocated to Austin, Texas with her family at the age of 12.

Furthermore, Chip and Joanna both graduated from the same college, Baylor University, Waco three years apart. Chip graduated in 1998 with a Marketing degree where Joanna graduated in 2001 with a degree in communications.

They Became Engaged after a Year of Dating

Chip and Joanna continued a year before the former decided to pop the question to his then-girlfriend in 2002. That day, Chip had said Joanna that they were going to a private concert. However, he took her to a shopping center close to his parents’ hometown.

There Chip got kneeled down and proposed her to be his wife. Chip proposed Joanna with no ring. Instead, he took her to visit a jewelry store in the shopping center where Joanna could design her engagement ring.

There in the jewelry store, Joanna picked a round diamond and an antique-looking platinum setting. Joanna explained her engagement ring in her new book The Magnolia Story as:

“I had a blast sitting there with Billy, designing the perfect ring. Chip just sat there, patiently observing every second of it.”

The designer, Billy Holder, who was the friend of Chip’s father since high school days, said the newly engaged couple that the ring would take some more time to complete. So, he gave Joanna a substitute ring to wear for that day.

Chip put the ring on her finger and take her to a small Archer City hotel where her parents, little sister, and Chip’s parents and his sister all were waiting to celebrate their engagement.

Chip and Joanna Married in Waco, Texas in 2003

The lovebirds of two years, Chip and Joanna Gaines tied the knot on May 31, 2003, in the Earle Harrison House in Waco. The place was pretty close to where they went on their first date, Joanna told Us Weekly.

The newlywed couple went to New York City for their honeymoon where they stayed at the Drake Hotel.

They Had Moved in Together a Year Before their Marriage

Shortly after their engagement, Chip asked his fiancee to moved in together with him, which apparently was against their traditional Christian values. Chip admitted it wasn’t appropriate at that time in an interview with Jefferson Bethke.

In August 2015, Joanna reminisced the day Chip asked her to move-in in a sweet Instagram post. There she said: “I remember crying when Chip said we were moving in.” Here is the post:

Chip and I were going down memory lane today and we stopped at one of our first houses. I remember crying when Chip said we were moving in- it was dumpy and it smelled bad. We fixed it up and fell in love with it. To this day, if you ask us what our favorite house we ever lived in we both go back to this little white 800 sq ft home. We were broke and were forced to be creative with our resources and we were proud as punch about this place. Most of what I learned creatively stemmed from this little fixer upper. Small house or big, rich or poor- own the space you live in and love what you have. ❤️

They moved in into one of Chip’s rental properties, an 800-square-foot cottage. Joanna said the house was dumpy and smelled bad but “we fixed it up and fell in love with it.”

Chip and Joanna Gaines are Proud Parents of Five: Names and Ages of Their Kids

Besides being an adorable married couple, Joanna and Chip Gaines are proud parents of five children. They became parents nearly a year after their marriage. On May 4, 2004, they gave birth to a son, Drake Gaines (16). The Gaines named their first child after the hotel where they stayed for their honeymoon.

Chip and Joanna welcomed their fourth kid, a daughter Emmie Kay Gaines on February 1, 2010. And the pair gave birth to their fifth child, a son, Crew Gaines on June 23, 2018.

The Secret of Chip and Joanna Gaines Happy Marital Life

Talking to People, the husband-and-wife of 17 years admitted their married life is not perfect. However, Chip added, for him and Joanna, it is the bond they are “extremely proud of.”

Chip said: “our secret ingredient to our marriage and working relationship is solid mutual respect.” He added,

“We definitely disagree. It’s not perfect. A lot of hard work goes into this but if you can get to a mutual place of respect, you can change the world.”

Furthermore, Chip said that they had realized their strength as a couple in their early days of married life. He said, the pair loved spending time together and taking new challenges often.

He said they realized that they were stronger when they’re pulling together than pulling against each other early which indeed is the secret of their married life.

The pair are just days apart from their 17th wedding anniversary. Happy Wedding Anniversary in advance!!!