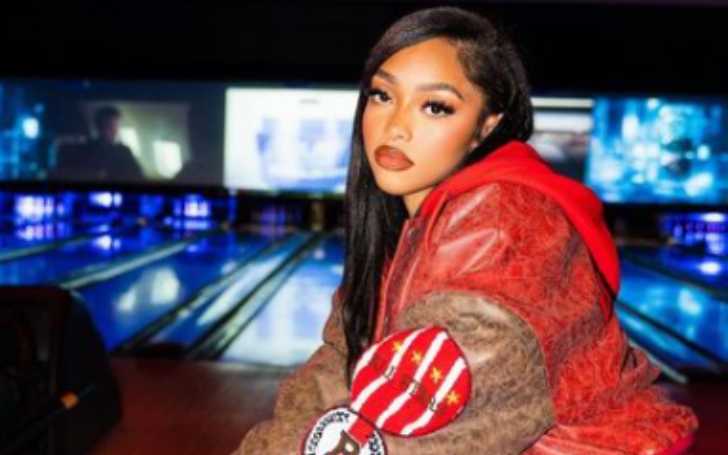 Jodie Woods is mostly popular as the sister of Jordyn Woods, a model, socialite, and former best friend of Kylie Jenner. Apart from being a celebrity sister, she is also an Instagrammer like her elder sister. She has millions of followers and is also associated with many clothing brands.

Woods was raised by her single mother Elizabeth Woods alongside her brothers and sister. She is very close to her mom but unfortunately, her dad is no more in the world. While the two sisters are immensely close, they even look alike which leaves many people with the question of whether Jodie and Jordyn are twins. So, are the two sisters twin? Does she have any other siblings? What happened to her father?

Let’s sneak-peek into the teenager’s life to find out every detail about her. Look into the article below to find out Jodie’s age, parents, boyfriend, sister, net worth, and more!

How Old Is Jodie Wood? Her Early Details

She was born in 2007 and is 15 years old in 2022. The young social media star was born in California and celebrates her birthday on 6th of January. She holds American nationality and belongs to African-American ethnic background. Her zodiac sign is Capricorn.

As a child, Jodie was homeschooled along with her other brothers and sisters. Looking at her age, she must be in high school now. However, the information regarding her high school or graduation is still under wraps.

The 15 years old was raised by her mother Elizabeth Woods as her parents divorced when she was very young. Talking about her mom, she is also a social media star with thousands of followers on Instagram. Yes, she has 360K followers on her Insta. Furthermore, she is idolized by her fans and younger generations as a “cool mom.”

Apart from being a popular Instagrammer, she is a businesswoman who too owns a company. As a working mom, she has been successfully able to handle her kids and professional life like a piece of cake.

Do Jodie And Jordyn Have The Same Dad?

Yes, Jodie and Jordyn have the same dad. They both were born to John Woods who was a television sound engineer. He reportedly used to work on The Fresh Prince of Bel-Air and was also a good friend of the actor and rapper, Will Smith.

Despite the separation of Jodie’s mom and dad, she had a good relationship with both of them. In fact, her mother considered her father a good friend and a partner even though they weren’t together as a married couple.

But unfortunately, her father passed away on January 19, 2017, when she was only 12 years old. He died just two weeks after he was diagnosed with cancer.

Does Jodie Woods Have a Twin? All About Her Siblings

Jodie Woods has three siblings; two brothers and a sister, however, she isn’t a twin. Having said that, she and her sister Jordyn Woods, being biological sisters, looks similar. As the matter of fact, both sisters have similar features to their mother Elizabeth.

Besides a twin-like-looking sister, Woods also has two brothers; John Woods III and Joshua Woods. Though their profession is not clear yet, according to sources, John is an artist as well as a manager of Woods Management Group. Similarly, her other brother Joshua is a photographer and a  filmmaker.

Do Jodie Woods Have a Boyfriend?

Jodie is only a 15-year-old teenager currently concentrating on her education. She is too young to be married or have a boyfriend now. Therefore, she is single at the moment and focusing on her study and flourishing career.

Nevertheless, Jodie was once rumored to be engaged to P Diddy’s eldest son, Quincy, as they were seen together in a photo on the internet. However, it was proved to be baseless talk when Jodie’s mom Elizabeth stated that they are like brother and sister to each other.

Meanwhile, her elder sister Jordyn Woods is dating Karl-Anthony Towns; a Dominican-American professional basketball player. He has a good relationship with Woods’ family and is often seen on their newsfeeds.

Many people are curious to know about the weight loss journey of Jordyn’s sister Jodie but the fact is she never intentionally lost weight. Maybe they were confused between the sisters as it was Jordyn who lost significant weight for Teen Vogue, yet she also didn’t do it purposely.

“When I first started losing weight, I wasn’t doing it to lose weight, and I think that’s why it worked out so well. For me, working out became my therapy. It’s all for your mind, really. When I realized I focused on my mind more than the goals in my body, I lost more weight.”

On the other hand, Jodie likes to work out and does it along with her sister but has never done it to lose weight.

The news of Jordyn and Kylie becoming distant as a friend was not hidden from the public eye. When it was all over the media, many speculated that they parted for life but according to PEOPLE, the two are still texting each other and haven’t completely cut off. Their friendship is not 100% over, regardless, the one-time best friends are not that close anymore.

Initially, Jordyn and Kylie were introduced by the son of Will Smith, Jaden Smith. They shared a strong bond once which was broken after Jodie’s sister hooked up with Tristan Thompson.

He was Kylie’s sister Khloe Kardashian’s on-and-off boyfriend with whom she also shared a daughter named True. She was found “making out” with him at a party which ruined her relationship with Kylie and her family.

Jodie Woods Hanging Out With Alabama Barker Made Controversy

Alabama is the step-daughter of Kylie’s sister Kourtney with her partner Travis Barker. While the Kardashian family had allegedly completely cut the Woods family, the two teenagers seem to have no problem hanging out with each other. Also, some fans even said they give BFF vibes like Kylie and Jordyn.

It looks like Jodie and Alabama fondly enjoy each other’s company. They often hang out together and also went on for dinner. Their then shared selfies on social media became the talk of the town. After the photos were uploaded, the Kardashian fans were confused about what is going on, flooding the comment section. Yet, the besties seem unbothered by what people have to say.

As mentioned earlier, Jordyn’s sister Jodie has millions of fans on her social media just like her sister. She is a verified user on both Instagram and TikTok by the name Jodie Woods.

What Is The Net Worth Of Jodie Woods In 2022? Her Career

The celebrity sister has a net worth of $1 million. Jodie, despite being 15 years old little girl has achieved a lot in her life. Though she is well known for being a sister of Jordyn woods, she has also made her own identity.

She is a fashionista who has millions of fans on her social platform and calls herself an entrepreneur. She simultaneously helps the family business at Woods Management Group and is a Brand Ambassador @prettylittlething. So, having talent in many fields, there is no question she is earning millions.

How Did Jordyn Woods Get Rich?

Jodie’s sista Jordyn has a flourishing career in media and modeling. She officially started her career in 2015 after she was signed to Wilhelmina.

She then got an offer to work with various brands and also started her own athleisure line named SECNDNTURE. Jordyn is doing great in her profession and has total assets of $6 million.

Miller McCormick, Mac Miller Brother: Where and What is he doing now?