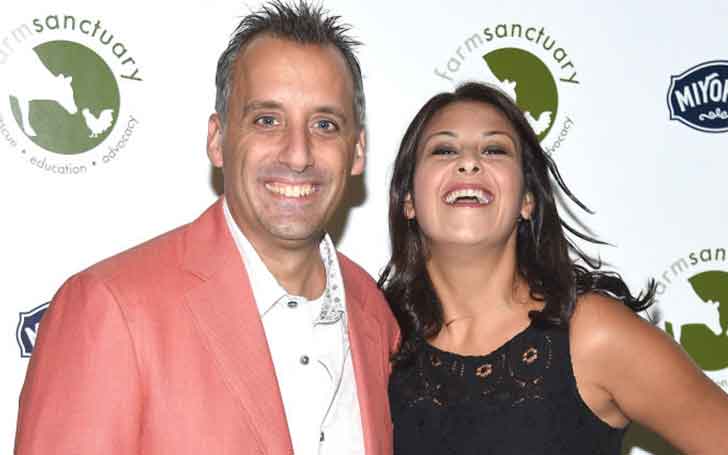 The accomplished comedian and a member of The Tenderloins, Joe Gatto is happily married to his wife. Now the big question is, does the blissful couple share children together? Joe is widely recognized for his work in Impractical Jokers but what do we know about Joe Gatto’s wife and their married life.

With a relationship spanning over eight years, the couple is still going pretty strong. In fact, Joe also has children together with his spouse Bessy.

Let’s take a sneak peek at the adorable love story of one of the happiest couples and find out more here today!

Joe is in a marital relationship with Bessy Gatto. The duo tied the knot on 2nd September 2013. The comedian exchanged the vows with his life partner in a low-key outdoor wedding ceremony that was attended by their family members and close friends.

Reportedly, they dated for several years before their nuptials.

The power couple is leading a successful matrimonial relationship ever since.

How it all began: Joe and Bessy are together since 2009

A very few are aware of the fact that Joe and Bessy are together since 2009. His life partner Bessy once shared a beautiful photo of themselves on her Instagram with the caption “First picture we ever took, 4 years ago” on 11th April 2013.

Moreover, Betty doesn’t refrain from sharing pictures with the love of her life. They usually share romantic pictures on their respective social media handles.

How Many Kids Do They Have?

Joe has two amazing kids with his wife Bessy. The two welcomed their first child, a daughter, Milana Gatto on 7th May 2015.

Bessy announced her pregnancy news with an Instagram photo showing her baby bump on 17th November 2014.

Expanding the Gotto family, the two became parents of their second kid, a son, Remington Joseph Gatto on 31st of July 2017. Following the birth of their son, the doting father told Touch,

“I’m excited he’s finally here. [My daughter] Milana made me love being a dad so imagine it’ll now be twice as fun”

The two announced their second pregnancy via Insta on 9th Feb 2017. The comedian captioned the photo, “Make room girls! Baby brother Gatto will be crashing our tea party this summer” with the hashtag babynumber2.

Judging by their social media, the couple spends most of their leisure time with their kids. The two also document every moment they share with them on social media.

The two are great supporters of animals especially dogs. The duo has played parents for several puppies.

Joe named his first pet Cannoli. The two also have many other pooches that include Spumoni, Biscotti, and Tartufo.

Feeding time at the Gatto zoo

Furthermore, Joe advocates for the “Adopt, Don’t Shop” movement, motivating people to adopt pets instead of buying from the breeders.

In early 2018, the couple together also attended the dog fashion show of SocialTeesNYC.

They love to attend Music Concerts

In addition to their love for the animal, Bessy and Joe are music lovers also. They even celebrated their first family date night watching Colbie Caillat‘s concert organized in New York City back in July 2015.

On 30th July 2018, the comedian posted a photo with his wife from Zac Brown Band’s event held at CitField.

Besides, Bessy featured in a few videos of the reality show Impractical Jokers that stars her hubby Joe Gatto, James Murray, Jenna Vulcano, and other members of the show.

Is Joe Gatto Vegetarian? What about His Spouse?

Joe Gatto isn’t a vegetarian but a pescatarian since 2016. He also lost a considerable amount of weight following his journey as a pescatarian.

On the other side, his spouse Bessy is a vegan.

Untold Story Of Bessy Gatto’s Life: A Bio With Details on Marriage, Career