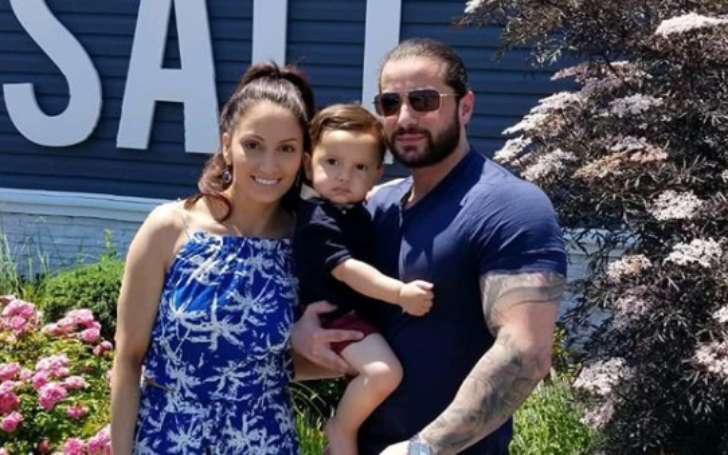 John Gotti Agnello is the grandson of the infamous mobster John Gotti Sr. The handsome hunk also became famous after appearing in the TV series, Growing Up Gotti. He featured in the series alongside his brothers and mom, Victoria Gotti.

Moving on, John, along with a successful professional life, relishes a beautiful personal life. Since 2015, he is in a marital relationship with his college sweetheart Alina Sanchez.

Today let’s take a look at his personal life and find out what is he up to in 2022 and how is his life with his wife and children? Also know, who is John Gotti Agnello’s wife? What does she do for a living?

John Gotti Agnello Is Married To Alina Sanchez Since 2015

When you are a member of a big crime family, many often assume you have got it all, money, power, fame, etc. John here did have all those, however, he completely moved away from that life.

We can say his wife has a big factor in helping John become a better man. He often shares pictures of his wife on his social media account, showering love and affection. Though we do not know how their life goes behind the scene, on-screen they look like a happy couple.

Now that you know about their beautiful marriage life, many of you might be curious about how it all started. Well, find the answer in the section below!

How And When Did John Gotti Agnello Meet His Future Wife?

Rarely do we see college sweethearts take their romance all the way to the end. John and his wife, Alina are prime examples of those rare couples. The pair have been dating before they started college.

It was John’s mother Victoria who first revealed John and Alina’s love. In an interview with Radar Online, while talking about their relationship, she said,

“They met just before college and kind of saw each other through all of the academic years and they were always good for each other.”

Their affection for each other can be clearly seen in the posts that John shares on his Instagram account. In many of the pictures, the caption clearly indicates how much he loves his wife.

John and Alina tied the knot with his girlfriend turned fiancee Alina on September 25th, 2015 in a nuptial held at the extravagant Oheka Castle, Long Island, NY.

My handsome son john and his beautiful new wife Alina!! Congrats! I love you son. -more than life! And my daughter pic.twitter.com/Cf8yT3KyMp

At first, the tabloid Page Six revealed that wedding guests to give at least $5,000 worth of gifts. The ceremony was attended by around 500 guests and at the end of the marriage, John and Alina raked in $2.5 million. Not bad for Teflon Don’s grandson. The amount also puts John’s uncle John “Junior” Gotti’s $350,000 to shame. However, later the tabloid itself stated the representative for the family blatantly denied all the claims.

Aside from the money, the matrimony in itself was a big and quite long affair. Starting from 5:00 pm on Friday it lasted until 1:00 pm on Saturday.

Besides, guests included the likes of John Travolta, his late wife Kelly Preston, Goodfellas star Debi Mazar, and Robert De Niro‘s daughter, Drena De Niro. Moreover, many of the big names from the mobsters were also in attendance, though their identities remained confidential.

It was John’s mother who took full responsibility for the whole preparation. In the interview with Radar Online, she talked about how hectic the whole process is and said,

“It’s so hectic. What we perceive as little details become major decisions. So, it’s hard because I think of these things as tedious and not that important in the grand scheme of things, but then again, I think back to when I was the bride-to-be and I realize that they were so important. So, I give that leeway.”

Well, the wedding was certainly exceptional, to say the least.

Do John Agnello & His Partner Have Children?

Yes, the pair is a proud parents of one son, Johnny Agnello. Their only son was born on November 25th, 2016. The kid holds mixed ethnicity of Italian and Hispanic.

John often shares photos of his son, be it on his birthday or any other occasion. In one of the birthday posts John made for his son, he opened up about how becoming a father changed his life.

“Happy 3rd Birthday to my bestfriend. You have taught me how to be a better man and outright just a better person. You light up daddy and mommys world everyday. We love you so much.”

Judging by the photos John shares, it looks like his son is quite close to him. Find out why!

I love you too big boy.

Safe to say, the family of three lives a rather peaceful life. Now, before you go, we’ve one more thing to cover and that is, what does John’s wife do for a living?

Alina Sanchez is a certified Physician assistant based in East Hills, New York. She is a Long Island University Biology graduate. Apart from that, she also studied Biology and General at Siena College as well.

Since 2017, she serves as the Physician Assistant at the St. Francis Hospital, The Heart Center. Previously, she worked at the New York-Presbyterian Hospital. In addition, Alina is also a baker and loves to cook cakes as well.

We can say John really hit himself a big jackpot with the likes of Alina coming into his life.

What Is John Gotti Agnello’s Net Worth?

American TV personality Victoria Gotti’s son John Gotti undoubtedly is rich and lives a beautiful life. But when it comes to his net worth, he has been silent.

Unlike him, his mother Victoria is pretty open about her wealth and has a total net worth of $2 million as of 2022.

In case you didn’t know, John is the son of Victoria Gotti and Carmine Agnello. While his mother is an American writer, and reality television personality, his father is infamous as a New York mobster from the Gambino crime family.