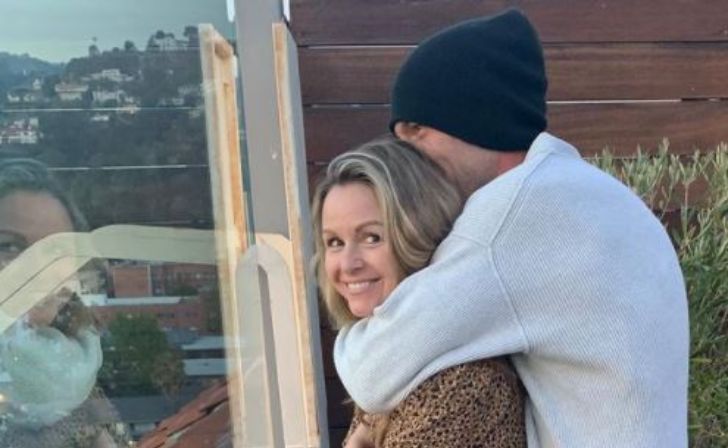 Erin Angle is a registered nurse and an anesthesiologist; better known as the wife of Jon Bernthal, an actor who rose to prominence for his role of Shane Walsh on the AMC horror series The Walking Dead (2010–2012; 2018).

Angle’s husband further gained ground as Frank Castle/The Punisher in the Marvel Cinematic Universe (MCU), originating the role on the second season of the Netflix action series Daredevil (2016) and headlining an eponymous series from 2017 to 2019.

Erin and Bernthal have been together since the early 2000s and now are parents to three children. Read all about the latter’s story; her life prior to meeting her actor husband, the commencement of their relationship, afterward, and so on.

Erin Angle Is A Pennsylvanian And Related To Former WWE Star

Mrs. Bernthal, Erin Angle was born in 1977 in Pittsburgh, Pennsylvania where she also spent most of her early childhood. The wife of the Wolf Of Wall Street actor though is yet to reveal her exact birth date despite some reporting the day falls on the month of February.

The only time Erin has ever mentioned her father was when she shared a picture of him on her Facebook in April 2014. The Snitch star’s wife however apparently is the daughter of Cindy Abbondanza Angle.

Angle furthermore also has four sisters – Cassidy, Jackie, Kristen, and Lea in addition to a brother named Mark Angle.  She comes from the family of wrestlers, something that her husband, Bernthal, himself confessed in an interview.

Truth to be told, she in fact is the niece of the former WWE superstar, Kurt Angle.

Erin Angle Is A Nurse

The former student of Canon McMillan High School completed her college education at the Indiana University Of Pennsylvania where she obtained her Nursing degree in 1998.

She later pursued a Master’s in Anaesthesiology from the University of Southern California in 2008.

After becoming an anesthesiologist, Angle went on to work for institutions such as Georgetown University Hospital, Mass General (Boston), and Stanford University Medical Center as well as the Harbour-UCLA Medical Center.

The couple had Sarah at Engaging Affairs as their wedding planner while Occasions caterers overlooked the catering. The officiant was the MCU star’s acting teacher, Alma Becker.

After the marriage, Erin and Bernthal became parents to three children. They had their first child, a son, Henry in Aug 2011. After that, the couple welcomed their son no 2, Billy in Jan 2013. The nurse and the actor pair became parents for the third time when they had a daughter, Adeline in Feb 2015.

The family resides in Ojai, California.

How Did Erin Angle Meet Jon?

Bernthal has just returned to DC from Russia having studied theater when he met his wife, Erin.

Prior to that, Jon, after leaving Skidmore College in 1999, Bernthal had joined the Moscow Art Theatre in Russia. While there, he boxed, took ballet, played catcher on a pro baseball team and lived in squalor, and listened to a lot of Willie Nelson and Waylon Jennings.

On the night he returned to D. C., the following year, the Walking Dead actor’s friends threw him a welcome-home party at a local bar. There he noticed one of his pals talking to two women, so he went over to tease him.

“I came over and was just rudely messing around, and I know this is the corniest thing in the world, but when I actually saw Erin, it was literally like angels were singing. I had never seen anyone so beautiful,”

described the very first moment when he saw Erin. After that, Erin, who was then the young Georgetown University Hospital trauma nurse, and Bernthal wound up talking for 45 minutes.

Soon, they started dating, but Jon admits, at the time, he was only in his early 20s and had no idea where it would go. When the Ford v Ferrari star moved to Boston to study acting at Harvard, Erin followed him, taking a job as a nurse at Mass General.

Following their relocation to L. A., they broke up briefly owing to Bernthal’s committing a bunch of dumb stuff. After dumping Jon, Erin moved to San Francisco. Bernthal post the split would drive up to the Bay Area and put flowers and poems on Erin’s car, whenever he didn’t have auditions.

Singer Willie Nelson Helped Them Get Back Together

On The Road Again singer, Willie Nelson turned out to be a huge cause in reuniting the Harvard graduate and the anesthetist.

The two hadn’t still patched up their romance; then one day when he thought she might be softening, he bought him and Erin two tickets to see Nelson at the Fillmore. After reaching the concert, he snuck backstage and found a postcard and wrote a long letter to Willie with a joint and told him the situation with his and his girlfriend.

Bernthal told the Scientist singer how much of a good-hearted woman Erin was and thereby asked him to play the song Always on My Mind for them. Nelson agreed and that night they got back together for good.

Erin’s line of the profession has helped not just her patient but her husband as well.

In 2008, when Bernthal thought he’d finally made a breakthrough and showed up at his audition for the bro comedy I Love You, on the first day of rehearsal, the casting directors treated him like he didn’t exist. Shortly, Bernthal would lose the role to Andy Samberg.

After that, Jon says it was his wife being a trauma nurse who helped him cope with the disappointment.

Erin once again was strong and inspirational to her family, especially her husband, Jon Bernthal when the couple needed to stay strong during the time their daughter went to coma in 2018.

Opening up about the unfortunate turn of events, The Punisher actor once revealed the time when his daughter Adeline had an unexpected seizure, following which she entered a coma. Despite the tough time, Bernthal said his wife Angle handled the situation in the best way possible.

“People talk about bravery like fake macho bravery, but my wife didn’t flinch,”

He added the courage he had seen in his wife was something he had never seen. Angle and her husband’s little girl had contracted encephalitis, a viral infection that causes inflammation in the brain.

Adeline remained in a coma for three days straight and when she did wake up, Jon and Erin’s daughter was unable to recognize her family. She though has since made a full recovery.

Bernthal later revealed the sickness also led him to exit the Ryan Gosling starrer Neil Armstrong-centered movie. He was all set to play the role of astronaut David Scott in the movie. The role, henceforth, went to Christopher Abbott, whose past credits include Vox Lux, Sweet Virginia, and James White.

Jon Says His Wife Helped Him Change His Perspective

Erin’s profession has also helped Bernthal to deal with the constant barrage of criticism, the actor himself admits.

The Washington DC-born actor says his wife’s career made him think about his problems differently.  He states whenever he’d come home “with tears in my eyes of frustration,” he would also hear about his wife’s challenging days as an I.C.U. trauma nurse and realized the rejection as an actor wasn’t as emotionally taxing.

Bernthal says his wife’s real story of her holding somebody’s hand as they were passing was something of a mind-changing perception for him. The now 45-year-old star also said how Erin telling him the hospital actions of letting somebody know that they weren’t going to ever see a family member again—put a clear perspective for him.

Jon And Erin Angle Almost Didn’t Marry Each Other

The union of Bernthal and Erin almost didn’t happen.

As such in July 2009, when the Walking Dead alum was walking his pit bull in Venice Beach, a drunk man called to the dog and allegedly began following Bernthal home.  Bernthal told the man to back off and when he didn’t, the actor clocked the man in the face, consequently making him unconscious.

An hour later, the Skidmore College graduate found himself in a police station where he says cops warned him, “If that guy doesn’t wake up, you’re going away for life.” Bernthal recalling the incident in Esquire’s winter issue said he hoped to whatever is above that if he woke up, he’d change things, get married, have kids, and stop with the anger.

The former theater actor kept his word, marrying Erin Angle, and raising three children with her. Before that, Erin’s husband had several other run-ins with the law, including the incident where the police busted him with small amounts of marijuana as a teen.

Is Erin On Social Media?

Erin albeit absent on Instagram and Twitter has a moderately active Facebook handle where she has only a handful of pictures and snapshots of her family.  On her socials, she also often conducts fundraising activities in addition to giving shoutouts to her husband and children.

What Is Erin Angle Net Worth?

Erin’s husband, Jon Bernthal, in recent years, has been quite a busy actor with hoards of TV works; the father of three has been reported to pull in the domain of $300k to $400k per episode from his recent hits, Daredevil and The Punisher.

There are also the paychecks from all those movies he’s appeared in since the early 2000s. Taking those into account in addition to his TV fame, it’s pretty understandable he is worth over $10 million.

Then again, in any case, the like manner maths are difficult to conclude for his significant other, Erin Angle. There simply could never be a situation where either Jon or Angle herself shares the latter’s net worth considering the way she appears to be more averse to show up for interviews much less reveal her monetary standings.