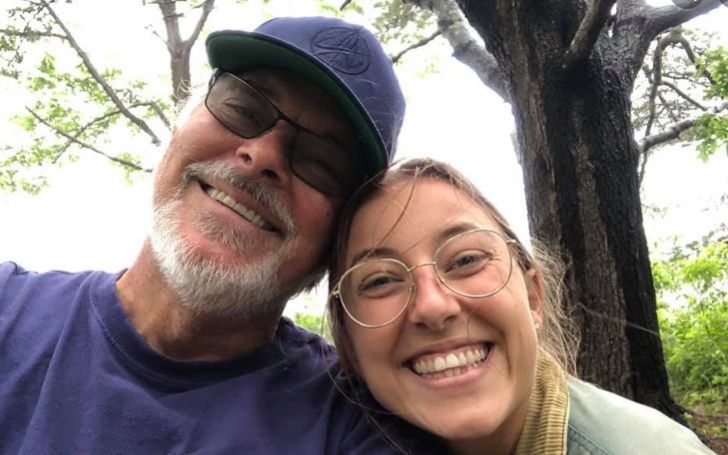 Elizabeth Francis Frakes or Eliza Frakes is a theater actor, writer, and filmmaker based out of Portland and Los Angeles. Her mother, Genie Francis is best known for her roles as; Laura Spencer on ‘General Hospital’, Diana Colville on ‘Days of Our Lives,’ and Genevieve Atkinson on ‘The Young and the Restless.‘

Frakes’ father, Jonathan, on the other hand, is recognized for his portrayal of Commander William Riker in the television series Star Trek: The Next Generation and subsequent films and series. He also hosted the anthology series Beyond Belief: Fact or Fiction, and was the voice for David Xanatos in the Disney television series Gargoyles.

Genie and Jonathan’s daughter, Eliza makes plays, screenplays, poetry, and fiction. Her work mostly incorporates the presence of absurdity in the mundane, the role of humor in drama, and the socio-political climate.

Frakes is also a passionate collaborator and art maker who in addition has worked on both sides of the camera again as an actress, a director, a writer, and a camera PA and digital utility. Get an extended version of her biography, wiki, in the writings below; starting from her birth, education, her theater journey, her relationship, and so forth.

Jonathan and Genie’s daughter, Elizabeth Francis Frakes was born on May 30, 1997, in Maine. The now 24 years old Frakes grew up in Belfast, Maine alongside her brother, Jameson Ivor Frakes.

Her brother, Jameson, is a musician and is not much interested in an on-screen career. He was also a documentary study major at Ithaca College.

Eliza graduated from Lewis and Clark College in 2019 with a degree in English and Theater.

Frake’s theater career began as early as her mid-teens when at 15, she became the winner of a prestigious National YoungArts Foundation Honorable Mention for her film IV Script, With Love, Tuck, and Alex.

When studying in Viewpoint school, Frakes had said she wanted to study filmmaking and storytelling skills so that she could make documentaries to educate the public on environmental issues.

While in college, Eliza was heavily active in both the English and Theatre department and had completed an independent study in conjunction with both departments that allowed her to write a pilot and a play.

Her original pilot later went on to win the student branch of the Wild sound festival.

Also during her university period, she was the recipient of the Departmental Distinction Award in acting.

To learn acting lessons, Frakes went to study with Portland Experimental Theatre Ensemble. There she learned everything from devising to Shakespeare. She was also an RA/TA at Fir Acres’ writing workshop, in Portland, Oregon.

After graduating Portland Experimental Theatre Ensemble, Eliza started living and working across the country in writers’ rooms, on sets, in theatres, and as an educator.

During her time in Los Angeles, she worked at Fuzzy Door Productions remotely serving as a script coverage writer. Some of Frake’s theater roles include Mash in Stupid F*$king Bird, Tabby in Cuddles, Lily in Waterlily, and Sarah in Murky (short film).

So far, Frakes’ theater writings include Remembrance Day and Moleman.

One Of Her Works Has Been Featured At Cannes

Frakes’ has also managed to get one of her short films into Cannes and was also the winner of the Fort Lauderdale international film festival.

As a theatre maker, Frakes’ colleagues have described her as the one who is really good at devising original material and the one who has starred in classical, modern, and experimental plays at the university and professional levels.

Eliza is also the founding director of 920 Collective, an interdisciplinary artists’ community that meets to collaborate with and support early-career makers in the generation of new media.

She is likewise a member of Corrib Theatre.

Frakes resume outside of theater began to form when in September of 2019, she landed a gig as a Writer’s PA on a new show for CBS all access, which allowed her to work in the support staff and learn from sitting in the TV writers’ room.

Then in 2020, Eliza completed a year-long residency with Echo Theatre as one of their selected young playwrights, where she debuted her first full-length play, Moleman.

During this time, Frakes founded an interdisciplinary art group, Might Be A Bad One Collective. The group allegedly meets twice a month with the goal of making a space for collaboration, accountability, and a creative community.

When studying at Viewpoint School, Elizabeth at 16 wrote a children’s book, I Don’t Want To Play Princess. For writing the book she took the inspiration from the summers she had spent playing outdoors on Lake Megunticook in Maine.

Whilst a student at Viewpoint, Frakes had also earned her certification as a yoga teacher and used to teach yoga to children from low-income families. Frakes has additionally done some poetry works; some of which have been published in The Portland Review.

Despite having a career in acting, Eliza’s mother did not want her daughter to join the industry during her teenage life, despite Frakes wanting to do so.

Explaining her reason a while back ago with Your Teen Mag, said,

I let her do local theater, and I let her take acting class with a very good teacher. I would let her do a guest spot for the experience. But I would never allow her to be on a TV series.

She added that commitment pulls the teen right out of their normal-life environment & their peer group.

This concern of the Day Time Emmy winner comes from a very personal place. As such, she was just 14 when she joined ‘General Hospital’ and was on a three-year contract for 52 weeks a year. Eliza’s mother henceforth missed most of her high school experience.

Eliza Frakes’ parents Jonathan Frakes and Genie Francis met each other during the filming of the mini-series “Bare Essence” in 1982. They though started dating in 1985. After meeting for the second while filming another mini-series titled “North and South” in 1984.

After the marriage, they became parents to two children; a son, Jameson Ivor Frakes, born in 1994, and a daughter, Elizabeth Francis Frakes born in 1997.

Does Elizabeth Have A Boyfriend?

Frakes is yet to shed light on her personal matters especially when it comes to her romantic partner. The young adult has hardly sat up for interviews with an intent to talk about family matters. Much less who her boyfriend is.

What’s more, her locked-out Instagram handle also makes it a bit difficult to conclude whether she has a love interest or not.

Her Father’s Jonathan Frakes Net Worth

Eliza’s actor father and the Harvard graduate, Jonathan Frakes has an estimated net worth of over $25 million. The six-foot-three-inches tall actor mostly made this wealth through his acting career which has been on the run since the late 70s.

And although it’s been decades since his breakthrough in the Star Trek franchise, Eliza’s father is still getting continuous jobs in the show biz industry.

Someone who is also equally multi rich from Eliza’s family is her actress mother, Genie Frakes who allegedly also has a fortune close to $25million.

Frakes is fluent in playing Ukulele, French (Parisienne and Québécois), and Irish as well.