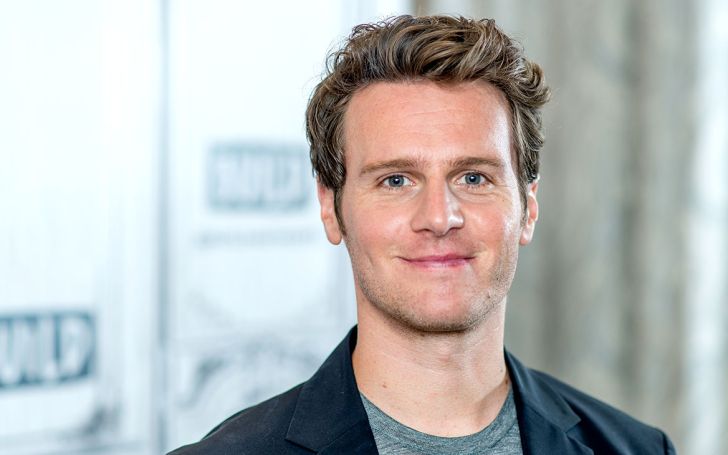 Famous for his work in Glee and Looking, Jonathan Groff is an openly gay actor. Ever since coming out as gay, he has been quite vocal about his relationship endeavors.

At the moment, he is in a happy relationship with his boyfriend. As per the reports, the two are dating for a while now. However, very little about his gay relationship is known in the media.

Well, here we have collected some never told facts about Jonathan’s boyfriend in 2022 and their affair. Find out more in the article below!

Jonathan Groff Is Dating In 2022: Who Is His Boyfriend?

After numerous past affairs, Jonathan is in a stable relationship since early 2018. He is dating his boyfriend Corey Baker, a New Zealand choreographer.

No one knew the Hamilton star is in a committed relationship until an interview with the New York Times revealed it.

As for their first meeting, they came across each at the Christchurch International Musical Theatre Summer School. Jonathan had gone to New Zealand to teach at a summer music camp where Corey happened to be a teacher as well.

Besides, the duo keeps a low profile when it comes to their relationship. Both of them are not active on any social media platform. As of 2022, Jonathan and Corey are together for over four years and their relationship seem as strong.

Jonathan And Corey Had a High School Like Romance At First

In 2018, Jonathan flew to New Zealand to teach at a summer theatre camp. But little did he know, his life was gonna change for good as he came across a handsome man.

Soon they chatted up and had this instant connection which subsequently turned into love. However, their relationship initially was quite different. Different, how?!

To begin with, Croff had flown halfway across the world with his mother. Similarly, Corey was living with his mum.

When the duo started going out, their romance was all so cordial and teenage-like. They’d share a kiss after their date, and then Jonathan would drive his boyfriend to his mom’s house.

Take a look at Jonathan talking about his dating life at James Corden Show!

New Zealand-born Corey is a filmmaker and choreographer. So far, he has choreographed various events in parks, playgrounds, stadiums, shopping centers, and rugby games.

Before coming out publicly in 2009, Jonathan never divulged anything about his relationships. But the same year he came out of the closet, he also came out with a boyfriend.

Groff revealed he was dating singer & actor, Gavin Creel. At the time, the Glee star was 24-years-old.

After breaking things with Gavin, Jonathan started going out with Star Trek star Zachary Quinto in 2010. It was Zachary who first mentioned they are dating during an interview with the Out Magazine.

At the time, he even mentioned his plans to have kids in the future. However, their relationship couldn’t last and the gay couple split in 2013.

Aside from these two, Jonathan never had any public romance with any lover. Nevertheless, in a very revealing interview, Jonathan talked about having boyfriends in the past.

Jonathan Groff Came out to Friends and Family in 2008

Just a month after he left the musical Spring Awakening, Jonathan traveled to Europe all alone. It was the first trip for Jonathan, all by himself.

At one point in time, he went to Florence where he had a startling revelation. He thought that despite keeping a  journal every single day since high school he never wrote about his boyfriends.

Right then, Jonathan started writing about his boyfriend, who he was dating at the time for three and a half years. While writing, he realized that it was time he came out to his friends and family. And so he did.

As soon as he came back to the US. he came out of the closet. Subsequently, he also called it quits with his boyfriend and moved out of their personal apartment.