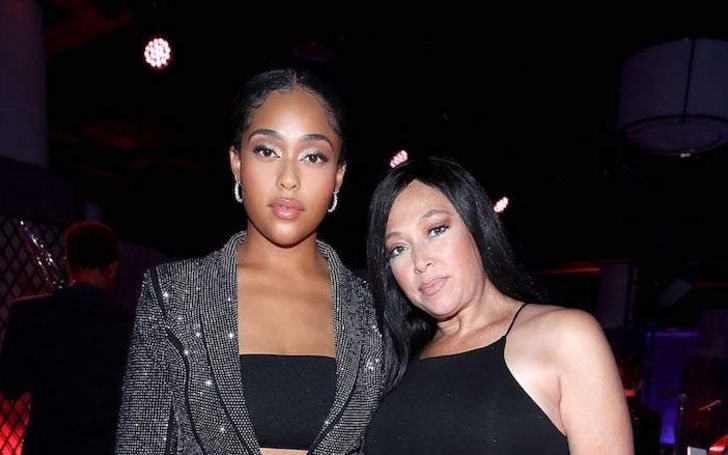 Jordyn Woods is an American model who gained wide recognition after her relationship with Kylie Jenner. Although she is part of the razzle-dazzle of the industry for a long time, Woods shares a strong bond with her parents.

While Jordyn Woods’ dad died in 2017, her mother has been by her side in her ups and downs.

Let’s discuss her relationship with her father and mother.

Jordyn Woods Parents: Her Mother is a Socialite & Her Talent Manager

As per Entertainment Tonight, Jordyn’s mother Elizabeth Woods is a socialite in Los Angeles. Not only this, but she also works as a talent manager for her daughter Woods. In fact, her Instagram profile states that she is a Talent/Brand Manager at Mixed Image Media and Woods Marketing Group.

During Woods’ fall out with Kylie, Elizabeth made a post on her Instagram with over 334k followers addressing all the companies who were trying to sell products taking advantage of Jordyn’s fame after her fall out with Kylie. She wrote,

“We are well aware that many people have been selling merch… We would like for the world to know that we have not authorized any of this and have not profited from any of these sales whatsoever. Thank you for all the support and love.”

Jordyn Woods Father was a Cameraman By Profession

Unlike Jordyn’s mother, her dad John Woods was a cameraman by profession. He was part of several TV shows. However, he was most recognized for his work in The Fresh Prince of Bel-Air.

John Had a Close Connection With Will Smiths’ Family

Both of Jordyn’s parents, especially her father John Woods was good friends with Will Smiths’ family. They reportedly became friends when they worked together on The Fresh Prince of Bel-Air. Their family still shares a good bond.

Her Father Died in January 2017

Unfortunately, her father, John Woods, passed away in January 2017. Following the death of her father, Jordyn shared an Instagram post, a selfie of her dad, & wrote an emotional caption,

“Last night Heaven Got Another angel. My Daddy. Just two short weeks ago he was diagnosed with cancer and by that time it was too late. I appreciate everyone’s kind words and it means the world to me. It still doesn’t feel real. Forever and Always.”

He reportedly died two weeks after he was diagnosed with cancer.

Like Jordyn, her mother Elizabeth also chose Instagram to express her feelings following the death of her husband.

Well, Elizabeth referred to her husband as her best friend and explained the journey she had with him. She also thanked John for the kids they have from their relationship. She wrote,

“Tonight my best friend of so many years rode off into the sunset on a forever long Harley ride. Thank you for being a great husband , best friend and thank you for our fabulous kids and I’m so numb that I can’t even believe this is real. RIP my angel John.”

Jordyn Wished Her dad Happy Birthday a Month After His Death

Jordyn, who is dating Karl-Anthony Towns, took to Instagram to wish her father his birthday on February 27. Although John was not there to celebrate his birthday, Jordyn shared a beautiful family picture on her Instagram to cherish the occasion.

She wrote “Happy Birthday Daddy” in the caption.

John’s birthday falls just a month after his death.

She addressed how one of her parents passed away suddenly three years ago and that she wanted to be by her mother’s side during her illness.

Further, she also requested everyone to pray for her mother saying,

“God is just throwing me all of these obstacles just to prepare and make me stronger than ever. Please pray for a speedy recovery for @elizabeth woods… we need you healthy mommy.”

We hope her relationship with her parents this way forever.

Woods has three siblings; a sister, Jodie Woods, and two brothers John Woods III and Joshua Woods. John is a model and Joshua is a tattoo artist.