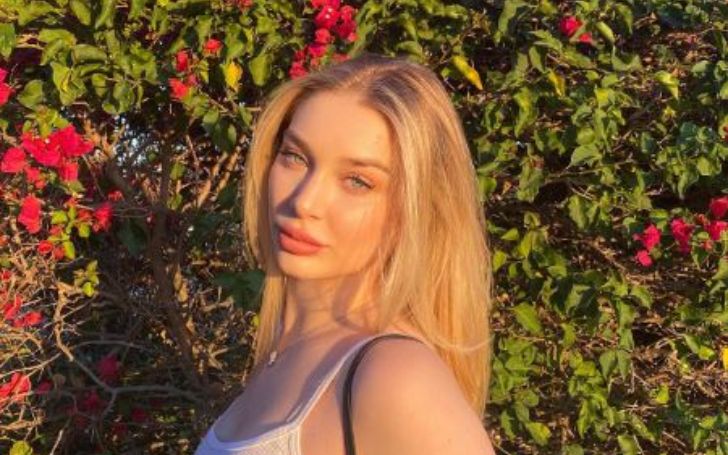 Jorja Bleu Michaels, 17, is an American future actress and songwriter born to singer-actor father Bret Michaels and his former partner Kristi Gibson. She is popular for her work in films like Mistrust and Bret Michaels: Life As I Know It.

Likewise, as a songwriter, Jorja co-wrote Unbroken alongside her father Bret at just 13. The rising star is also popular on Instagram where the star kid boasts over 31.3k followers at present.

Born as the second child to Hollywood’s rock star Bret Michaels and actress Kristi Lynn Gibson, will Jorja Bleu also have a successful career in the industry? Is Michaels dating anyone? Tag along with us to know about Bleu’s lifestyle, career, age, and more.

The rising star Jorja Bleu Michaels was born on 5th May 2005 in the United States of America weighing 6lbs 8oz. She was born under the birth sign Taurus and recently turned 17 in 2022.

She holds American nationality and has mixed ethnic descent of Irish, German, Swiss, and English from her father’s side.

Jorja finished high school in 2021 but the details of her schooling are not revealed. Similarly, in May 2019, Bret Michaels’s daughter graduated from middle school.

During her middle school graduation, her father made a Facebook announcement and congratulated her on writing,

“Huge congrats to Jorja Michaels on her #graduation today! You are amazing and totally embody the #Unbroken spirit that you shared on our song! #Congradulations.”

Jorja Bleu Grew Up With Her Model Sister Raine

The rising actress was brought up alongside her older sister Raine Elizabeth Michaels in Calabasas, Los Angeles. Raine graduated high school in 2018 and later studied music at Belmont University located in Nashville, Tennessee.

Jorja’s older sister is a model and actress who has posed for renowned brands including Sports Illustrated.

She began her modeling journey right after high school in 2018 and a year later, Elizabeth was picked as one of the finalists in the 2019 Sports Illustrated Swimsuit search competition.

Raine talked about her experience in an interview with Too Fab saying,

“Being a part of the 2019 Sports Illustrated Swimsuit issue is beyond incredible and is still crazy to me to think that I am a part of it,”

She also said that she is excited to see the physical copy of the magazine. She continued,

“I still haven’t seen the physical copy because in LA they don’t get it until like 3 or 4 days after it comes out in NYC, so when I get to see the physical copy for the first time it is going to be a really emotional experience.”

Jorja Bleu Michaels’ loving father has always been vocal about his love for his children. And on 5th May 2017, he honored his second daughter Jorja during her 12th birthday with the song ‘Jorja Bleu’.

He expressed his love and gratitude for his daughter via the music video which features Bleu’s picture blending in with him perfectly while he is singing.

The same act of love was also showcased towards her older sister Raine. Back in 2009, her father dedicated his single Raine to his older daughter.

And for those of you who don’t know it already, Jorja Bleu is the sequel to Bret’s single Raine.

The 17-year-old teenager was already a media magnet way before she stepped into the entertainment industry. Similarly, she has achieved so much at such young age.

At just the age of 12, Jorja helped co-write her father one of his masterpieces, Unbroken. The song is about physical and mental strength over misfortune or any kind of bad luck.

According to the father of two, Bleu was adjusting to life and going through a tough phase when she came up to him saying “Dad, can we write a song together.”

The song was released on Bret’s self-titled YouTube channel on 15th March 2019. So far, the song has over 1.37 million views with over 5.4k likes.

Moving on, the future songwriter made her acting debut in the 2010 reality television series Bret Michaels: Life as I Know It. The show is about her family’s daily lifestyle, especially her father Bret Michaels.

Not to forget, one of Bret’s music videos ‘Riding Against the Wind’ was made as the theme song for the show. The video contains clips of the family from the show.

Back in 2018, Jorja played a minor role of a girl at a birthday party in the TV film Mistrust starring Jane Seymour and Nia Peeples.

Is Jorja Bleu Michaels Dating Anyone?

The Mistrust actress is reportedly single as of mid-2022. Likewise, no news of her past love affairs or boyfriends has made it to the headline so far.

The rising star seems focused on growing her career and enjoying her teen days. Also, looking at her IG profile, she loves traveling to new places.

As mentioned above, Michaels was born to celebrity parents Bret Michaels and Kristi Lynn Gibson. As per sources, her parents first met back in 1994 and began dating shortly after their first meeting.

The pair were in an on-again-off-again relationship for 12 years before, Bret proposed to Lynn in 2010. After a rocky 16-year relationship, the Poison frontman popped the question during the final episode of his TV show, Bret Michaels: Life As I Know It.

He proposed to the mother of his children saying,

“I love you, and you’ve been unbelievably a big part of my life, I know we love and respect each other. And I want you to be my wife.”

During this time, Jorja Bleu was 5 years old and Raine Elizabeth was 10 years old. Sadly, Gibson and Michaels called off their engagement in 2012 just two years later due to personal reasons.

For all that, the pair are still good friends and spend quality time together. They also raised their two beautiful daughters together.

Jorja Michaels has over 31.3k followers on Instagram and over 5k followers on TikTok. Except for this, Michaels is not active on Twitter, Facebook, and other social.

Similarly, her model sister Raine has over 2k followers on Twitter and over 110k followers on IG. She goes by her user handle @rainee_m on both of the platforms.

The actress-singer has a growing net worth of $1 million in mid-2022. Her career as an actress and songwriter brings her thousands of dollars.

Talking about her mother, Kristi is worth around $12 million while her father, Bret has an estimated net worth of $14 million in 2022.

The 17 years old Bleu currently resides with her father in their Conejo Valley, Calabasas’ house. The 6,000 sq. ft. contemporary style house is worth around $4.8 million as of now.